(Minghui.org) For the eighth consecutive year, the Tian Guo Marching Band in Taiwan participated in the International Band Festival parade sponsored by the Chiayi City government on December 15.

Thirteen bands from seven countries and areas including Hong Kong, Japan and Canada performed in the opening parade of the annual festival, which started in 1993.

The Tian Guo Marching Band is composed of about 200 Falun Dafa practitioners. The Tian Guo procession was led by a blue banner reading “Falun Dafa.” The band performed Falun Dafa musical pieces with a theme specific to Taiwan, including “Gao Shan Qing” (Green High Mountain), as well as Christmas classics like “Jingle Bells” and “Joy to the World.” 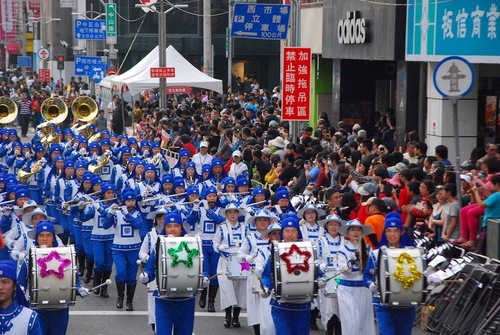 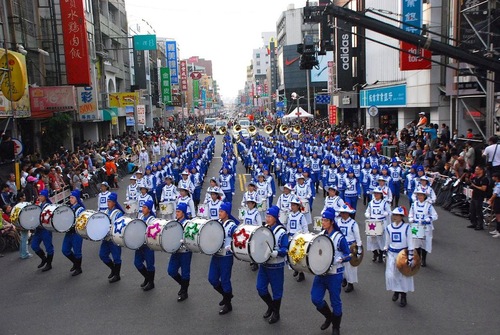 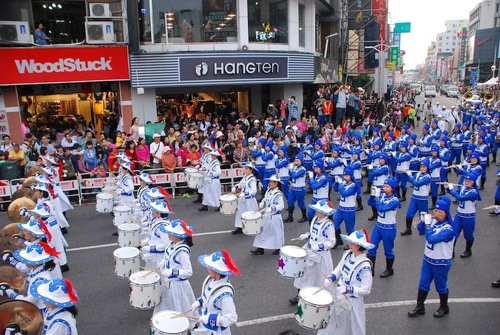 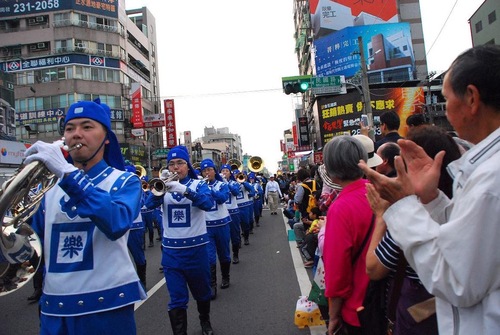 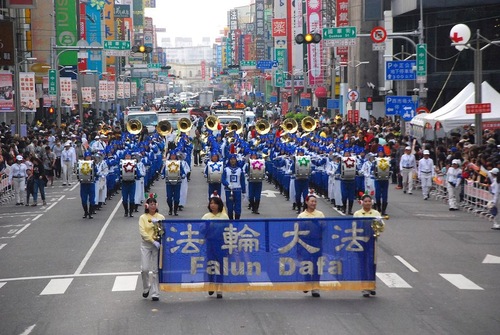 The Tian Guo Marching Band in Taiwan participated in the International Band Festival parade sponsored by the Chiayi City government on December 15.

Thousands of spectators packed the sidewalks along the three-kilometer-long route, starting from Chungshan Road. Many of them cheered the Tian Guo Marching Band, calling it “spectacular.”

A couple was drawn to the parade by the colorful costumes of the Tian Guo Marching Band. They commented, “These people look like cultivators!”

Mr. Chou from Kaohsiung said he had seen Tian Guo performances at many other events. He exclaimed, “I hope to see them again at next year's Lantern Festival in Pingtung!”

“I feel the joy in my heart,” commented Ms. Wang. She works in Taipei but visits her mother in Chiayi each year.

A retiree from Kaohisung exclaimed, “The timbre of the music is beautiful. Every member is so energetic! It's different.”

Mr. and Mrs. Lai said that they look forward to hearing the Tian Guo Marching Band each year at this event, noting, “The band is composed of members from all age groups. They must train so well. It's Falun Dafa after all!”

Mr. Xu, another Chiayi resident, complimented the practitioners' efforts. “We should treat Falun Dafa fairly. Those who are involved in the persecution [in China] should be held accountable,” he said.

“From Disability and Desperation to Hope and Health”