Overcoming Pressure by the Communist Regime, Raising Awareness During G20 Summit in Argentina

(Minghui.org) Falun Dafa practitioners and supporters overcame the Chinese Communist Party's (CCP) interference when raising awareness during the G20 Summit held in Buenos Aires on November 30 and December 1, 2018. They displayed banners beside the roads where the motorcade of Chinese President Xi Jinping passed. 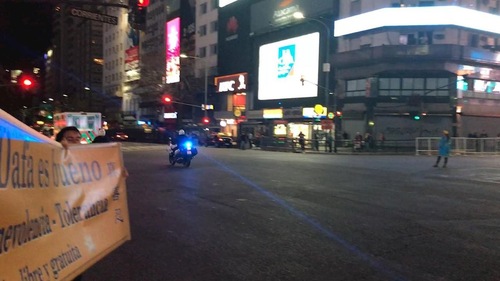 Falun Dafa practitioners continued their efforts to raise awareness of the CCP's persecution in Chinatown and other practice sites across the city that weekend. 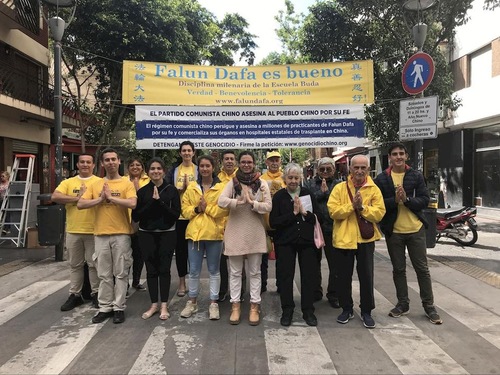 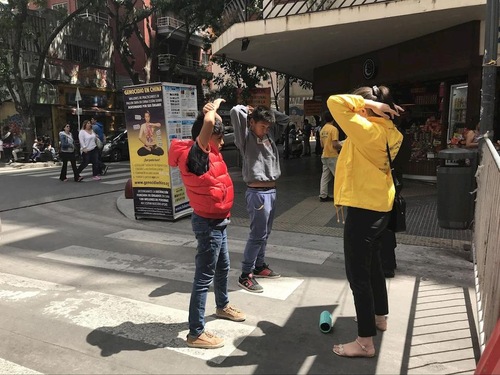 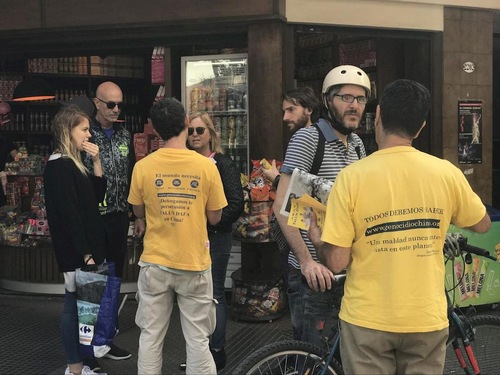 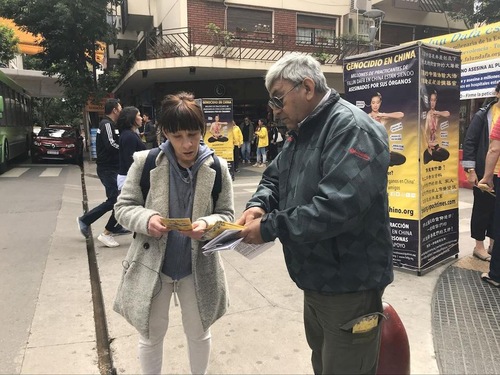 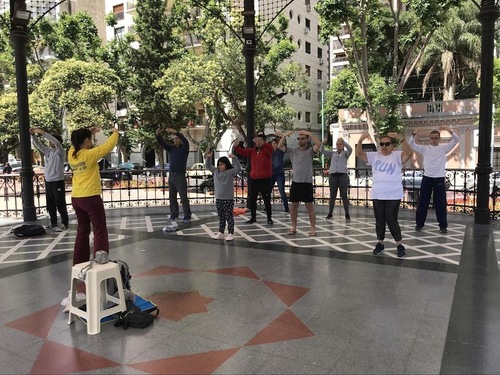 Argentinian practitioners experienced many difficulties when applying for permission to display the banners due to the tight restrictions applied by the security forces. They tried to avoid any type of protest, something common during G20 meetings. But, for Falun Dafa, there was an extra restriction demanded by the Chinese Embassy, and the Argentine authorities accepted this outrageous request.

The order for all the police was that, for events involving China, only red-colored clothes and flags were allowed and people with yellow clothes and banners were to be neutralized.

But with righteous thoughts, practitioners managed to display the banners for Xi to see on many occasions; and in many instances were helped by police officers who acted according to conscience instead following the unlawful orders. In some cases, police officers praised practitioners for being successfully achieving their goal of displaying the banners and defending their faith.

Xi Jinping arrived in Buenos Aires on Thursday, November 29, and entered the city of Buenos Aires through 9 de Julio Avenue. The first banner he saw was on the main landmark on that avenue, the Obelisk, where a small group of practitioners pulled out a 5-meter-long yellow banner that read: “Falun Dafa is Good. Truth, Compassion, Tolerance”.

When Xi´s motorcade was a few blocks before reaching his hotel, another small group of practitioners managed to clearly display two banners that read: “Stop the Persecution of Falun Dafa” and “Falun Dafa is Good.”

Practitioners noticed that Xi’s Chinese entourage was able to read the banner with attention, as they saw their faces close to their windows. Soon after, a group of policemen came and ordered them to show them their ID cards with an aim to detain them.

The practitioners took this opportunity to clarify the truth to them. They told them about Falun Dafa and its benefits, and how unfair and cruel the persecution was, including the CCP's state-sanctioned organ harvesting. They told them about the lawsuit in Argentina against former dictator Jiang Zemin and Luo Gan, former head of the 610 Office, for their crimes against humanity.

They also told them how the Chinese embassy in Argentina, with its unlawful requests and interference, is extending the persecution on Argentine soil and the Argentinians should not accept this. The officers listened attentively and expressed sympathy. Finally, the police officers praised practitioners' noble efforts.

On December 1, Xi met with President Trump at Trump’s hotel. On the route where he had to pass when leaving the meeting for his hotel, practitioners stood discreetly at different locations on the main road that led to Xi´s hotel in order to open the banners for Xi to read at the right moment.

There, they suddenly saw that many Chinese agents were filming them and pointing at them to the police. Police approached them to inquire about their motives for being there. Practitioners took this opportunity to clarify the truth to these police officers. They were touched and decided to protect the practitioners against the unrighteous orders from the Chinese embassy on Argentine soil.

Suddenly, another police officer from a higher rank came to order practitioners to clear the area in an aggressive tone. Once again, practitioners clarified the truth to him until his heart was also moved--he wasn't at all aware of the persecution, or what Falun Dafa was.

He decided to help them and told them about a quiet section of the street where they would be able to display the banner without interference. Practitioners did so, and managed to show Xi a big banner that read: “Bring Jiang Zemin to justice”, in Chinese and Spanish. 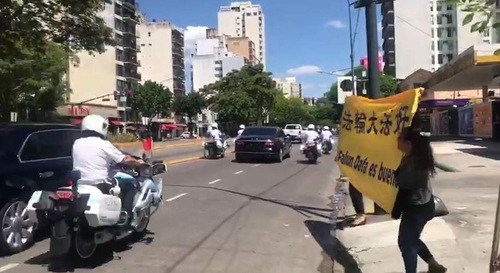 Practitioners display banners beside the road to the airport on December 2.

On Sunday, December 2, Xi Jinping met Mauricio Macri, the president of Argentina. This was Xi’s last day in Buenos Aires and he left for the airport once the meeting was over.

The presidential residence is located about 20 blocks from the circular highway that leads to the airport, between Maipu and Libertador Avenue. Maipu Avenue was completely blocked to traffic during the meeting, but pedestrians were allowed to walk on the sidewalks.

Hundreds of local Chinese residents organized by the Chinese embassy, dressed in red and sporting CCP flags and banners, were positioned at different points along the Avenue. Two female practitioners and a supporter of Falun Dafa waited at a petrol station where there was no police. As soon as they saw the motorcade, they came out of the petrol station and headed towards the most visible spot. Practitioners opened up a yellow banner that read “Falun Dafa is good” and told police: “We just want president Xi to see the banner. Please do not cover us. Thank you!” 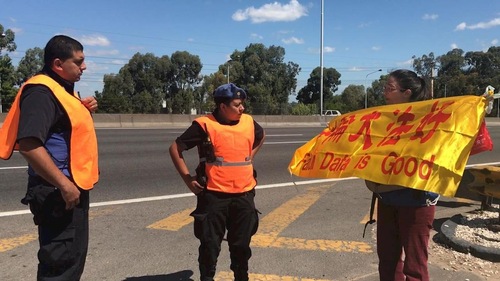 A small group of four practitioners had to be careful not to be recognized by the Chinese staffers and found a good spot about four blocks from the presidential residence to display a banner far enough from the closest group of Chinese.

As soon as Xi´s car left the meeting and was approaching the highway, they could open the banner just as the cars got to the curve. The location of these practitioners turned out to be the perfect spot, as it was just the spot where the police had to arrange a last-minute detour for the motorcade to take a turn. Thus, they had to slow down. So when Xi´s motorcade passed, it was about one meter from the sidewalk at walking speed. Those in the vehicles had sufficient time to read the banner and hear the practitioners. 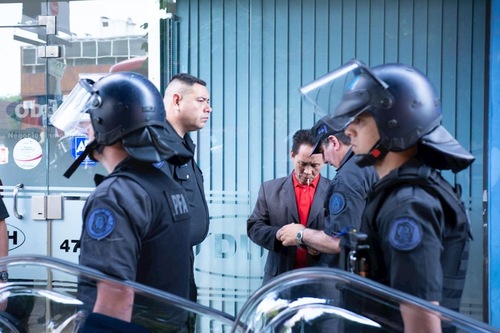 During Xi's visit, local practitioners also recognized a Chinese thug (an immigrant from Fujian Province) who was on the wanted list by an Argentine court. The thug was hired by the Chinese embassy to beat the practitioners who held a peaceful protest against Luo Gan when he visited Argentina in 2004.

A practitioner who had the court notice about the thug in his cell phone immediately informed the police chief present. By that time, the buses from the Chinese embassy had already left with this man on board. The police went after the embassy vehicles in their car, ordered them to stop, and got the Fujian immigrant off the bus and took him to the police station.