It had snowed earlier that day so vehicles were traveling more slowly than usual. Motorists greeted the practitioners with waves and thumbs-up to express their support. The practitioners performed the Falun Gong exercises as a group and talked to passersby about the CCP's persecution. 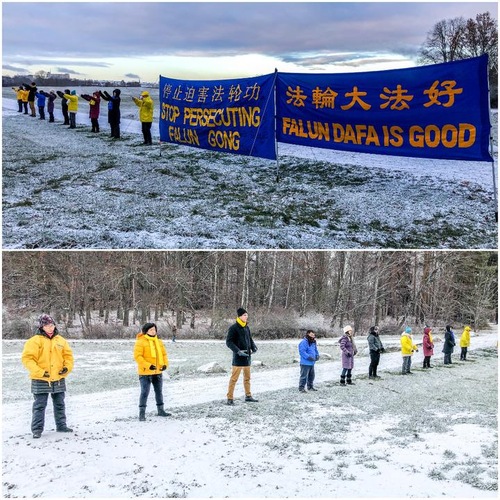 Falun Gong practitioners perform the exercises in front of Chinese Embassy in Stockholm.

Not long after the event started, a cacophony of noise blasted over from the Chinese Embassy's yard. Embassy staffers had decided to broadcast the CCP's propaganda songs through three large loudspeakers to disrupt the practitioners' event.

The practitioners continued their practice in the frosty temperatures and continued to explain Falun Gong and the CCP's persecution to passersby and on-duty police.

Several cyclists told practitioners that they had heard all the noise and wanted to know what was happening. After learning that embassy staff were trying to disrupt the practitioners' peaceful protest, one young man was indignant. He pointed toward the embassy and said, “Their brains must have problems. It is ridiculous!” 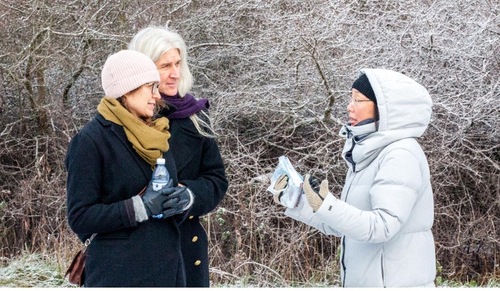 A middle-aged couple was concerned about the embassy's attempt to disrupt the practitioners' peaceful protest. They walked over to a police vehicle and suggested to the police officer that they stop the embassy from interfering.

The officer said that the embassy was acting improperly, as the noise not only interfered with the practitioners' event but also disrupted the local residents. He said he would write a report to the police department and the Swedish Ministry of Foreign Affairs.

Due to the cold weather, passersby had been few and far between before the embassy's noisy broadcast. However, more people came over and learned about Falun Gong after hearing the commotion

A practitioner named Cecilia said that she had not expected so many people to show up to learn about Falun Gong. In a few words, the practitioners helped the public understand the motives behind the embassy's harassment, and many expressed their indignation at the embassy's tactics. 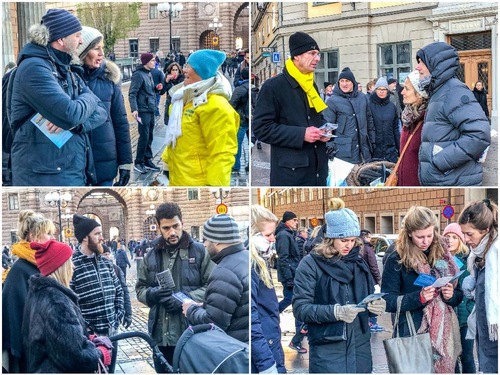 Practitioners raise awareness on Coin Square, next to the Royal Palace in downtown Stockholm.

The sun came out at noon and the practitioners went to Coin Square, which is next to the Royal Palace in downtown Stockholm, to continue to raise awareness of the persecution and call for help to stop the CCP's persecution of Falun Gong.