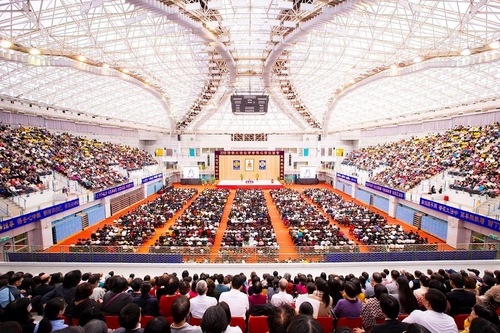 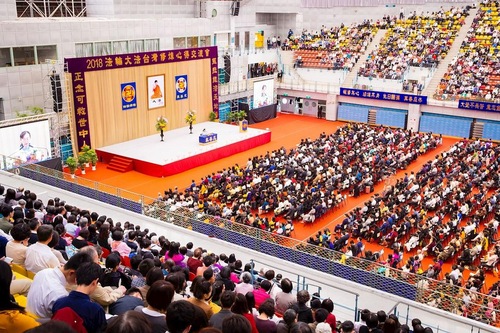 “The ideas and theories of this world cannot lead to spiritual perfection of any sort, and the ways that people live and act in this world do not accord with how beings really are in the universe. The ultimate reason you are human is to learn Dafa. Don’t let the madness and confusion of this world affect you. Cultivate with the heart you once had, and spiritual perfection is certain! May you grow ever more diligent as you approach the end!” (“To the Experience-Sharing Conference in Taiwan”)

Twenty practitioners from all walks of life spoke at the conference, including a physician, a college faculty member, a graduate student, an interior designer, and a housewife. They talked about how they followed the principles of Truthfulness-Compassion-Forbearance in their daily lives and saved people with their hearts. 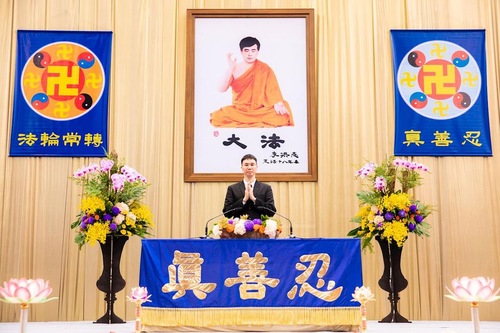 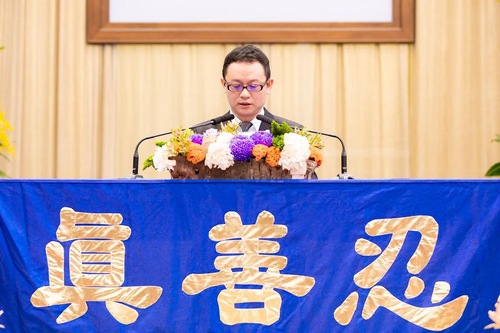 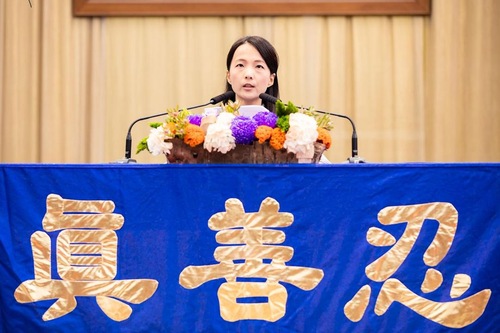 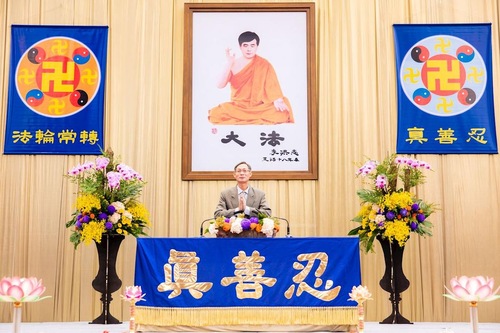 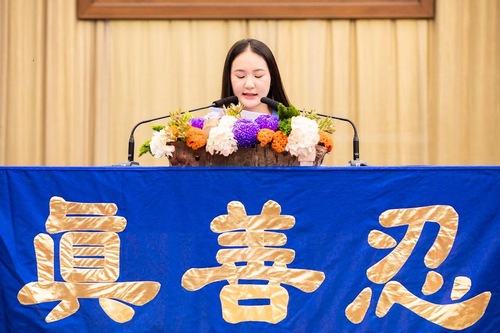 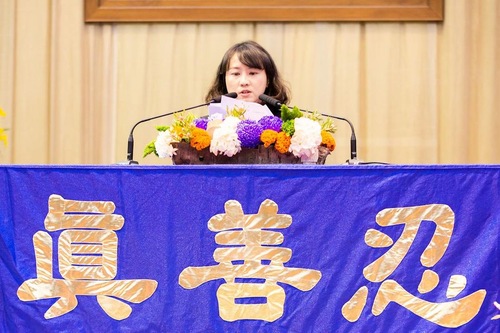 Twenty practitioners talked about their cultivation stories in the conference.

Zhou Minghui, a physician from Tainan, had always been successful academically and professionally. But when he was only in his 20s, he found his life increasingly stressful, and he started to suffer from insomnia. He also had liver problems. Just as he was feeling frustrated by these issues, he came across Falun Dafa at an expo of student organizations on campus. “I was so amazed, because this was something I had always been searching for and dreaming about,” he recalled.

Besides improving his mind nature as a practitioner, Mr. Zhou had also become involved in Shen Yun promotion in recent years. He said that Shen Yun brought traditional values to people and helped restore society's moral standards. “I remember that when I first became a practitioner, I did not have much time for my friends. But during Shen Yun promotion, I found it important to work with people from mainstream society. People won't ask how much money you make. They judge you by your appearance, social skills and talking points,” he said.

With that in mind, Zhou paid attention to his image while enhancing his technical skills. Interestingly, even when he thought he was well prepared, he would always receive some feedback on areas where he could do better. “I later realized that this is part of my cultivation. Good preparation is necessary, but it is not enough. The presentation is not a time for me to perform or show off. Instead, it is an opportunity for me to introduce Shen Yun to the audience and save people.”

An Encounter with a Special Chinese Group

Qiu Yutang, an interior designer, discussed how he lived by a practitioner's standard in his daily work activities, while also finding opportunities to tell people the real story of Falun Dafa. He shared that during a design and construction project for a home, he spoke with two workers from mainland China about what Falun Dafa is and how the practitioners were mistreated by the communist party. One of the workers invited him to come to talk more with his friends, who were mainland Chinese who had come to Taiwan many years before.

As Mr. Qiu arrived at the place, he was met by two strangers, who agreed to show him the way only after both his eyes were covered with a scarf. Remembering the Fa teachings from Master, Mr. Qiu felt no fear and agreed.

As they arrived, Mr. Qiu found a big group of people living in an apartment. Many of them were from Fujian Province and some of them had tattoos. The worker he recognized, whom the group called boss, invited Mr. Qiu to talk about Falun Dafa and the mistreatment that practitioners experience for their belief. “I stayed there from morning to evening chatting with them. After hearing about the bad deeds the communist party had done, 108 of them agreed to quit the party and its affiliated organizations,” Mr. Qiu explained. “I was very touched too. Although they came from special backgrounds, they were able to tell right from wrong, and they made the right decision for their futures.”

Xiao Yijun started to practice Falun Dafa when she was a college student. Although the wages from her part-time job at that time were low, she saved some of it for airfare to travel to Hong Kong so that she could help Chinese people break away from the communist party's hate propaganda. “Even though it meant a little extra effort and sacrifice for me, I think it was still worth it because people would come to know the facts and have a better future,” she said.

After getting married and having a baby girl, Xiao often told her daughter the meaning of cultivation and of returning to one's true self. Growing up with the Falun Dafa music of Pu Du and Ji Shi, her daughter was able to recite some poems in Hong Yin at 15 months old. By the time she was two years and three months, she was able to take turns with her mother to recite Lunyu.

During a march in Hong Kong last year, Xiao's preschool daughter not only walked the entire route but also told her mother that she wanted to join such events in the future. Xiao agreed that taking care of her daughter took some of her time, but is in itself part of her cultivation that helps improve her xinxing.

Zhang Junmin is a college instructor in Taichung city. “When I first read Zhuan Falun, I could feel the rotation of the Falun, a strong energy field, and sometimes I could even elevate in the air. So I was very determined,” he recalled.

However, his parents and wife were always against his practice, making Mr. Zhang realize that in addition to cherishing the opportunity to practice cultivation, he also needed to do well in his daily life and treat his family members well. As a result, he worked hard and received the third prize from the Education Ministry. Furthermore, he won two silver medals at international invention conventions, one in Taipei and the other in Seoul. Impressed by these accomplishments, his family members became supportive and his wife also became a practitioner.

While helping coordinate practitioners in his district, Mr. Zhang noticed that about half of the group practice sites in the region were diminishing. So he took turns at each practice site for the morning exercises. Sometimes he had to get up at 3:30 a.m. It took about 18 months for him to re-establish the practice sites. In addition, he cooperated with these practitioners to work out times for group Fa-study.

Zhang often reminds himself to be diligent, just like when he first began to practice. “No matter how busy I am, I have to handle my work and family well, while placing Dafa as the highest priority. Only this way can our cultivation environment become better and better,” he said.

Letting Go of Attachments to the Internet

Zhang Kexin is a college student who began to practice with her mother when she was four. “At that time, I followed my mother to recite Hong Yin, and by elementary school, I was able to recite Zhuan Falun. Even during middle school, my mother and I often encouraged each other to do the exercises together,” she said.

At summer break after sixth grade, Ms. Zhang began to clarify the truth to Chinese people through the internet, so that they would not blindly follow the defamatory propaganda from the communist party. Influenced by other teenagers, she began to make online friends and indulged in fictional writing and cartoons. Although she recognized there were many negative elements behind the content, and that indulging in them negatively affected her health, it was difficult for her to resist the temptation.

But when she had the thought to negate the online content in her mind, Ms. Zhang could feel Master taking care of her and helping to purify her body. “I felt both moved and guilty—although I did not do well, Master did not abandon me,” she explained. After continued efforts, Ms. Zhang has now stopped listening to everyday music and playing on social media. “This helps me maintain a pure mind. Otherwise, that online content can easily interfere with my Fa-study, doing the exercises, and sending forth righteous thoughts,” she said.

Ms. Zhang hoped that other young practitioners could learn from her lessons, “By letting go of attachments to cell phones, online content, and social media, we will be able to do the three things better and remain diligent in cultivation.”

Hu Xinyun from Tainan said that she has spent most of the past 10-plus years enjoying everyday life. As a result, she was attached to comfort and had slacked off in her cultivation.

“When attending the experience sharing conference in New York in 2016, I was very touched, as if Master had given me a stick warning,” said Ms. Hu. After the conference, she required herself to manage her time well and study the Fa every day. Her attachment to material possessions gradually faded.

At the group practice site, Ms. Hu heard that some elderly practitioners were hand-copying Zhuan Falun line by line, in order to memorize the book. She was very moved and after a while, she was able to begin to memorize Zhuan Falun too. From that, she gained more profound understandings of the Fa.

Another area Ms. Hu needed to improve in was doing the morning exercises. She once asked two younger practitioners why they were able to consistently persist in joining the group exercises in the morning. “This is because cultivation is very serious,” one of them replied. Ms. Hu enlightened that it was her own problem—namely, she was unwilling to suffer, and that had prevented her from going out to the practice site. With that in mind, she became determined to overcome it and was able to do the five exercises every day.

The conference concluded at 4:30 p.m. Many practitioners said that they had learned a lot from Master' greetings to the conference, as well as from practitioners' sharing papers. “I now further realize the urgency of cultivation practice and saving people. I think I will make the best use of my time to do well and fulfill my vows,” one practitioner said.