(Minghui.org) Today's news from China includes incidents of persecution that took place in 12 cities or counties in 8 provinces. According to this report, 13 Falun Gong practitioners were subjected to mistreatment during their detention, and at least 8 were illegally arrested. 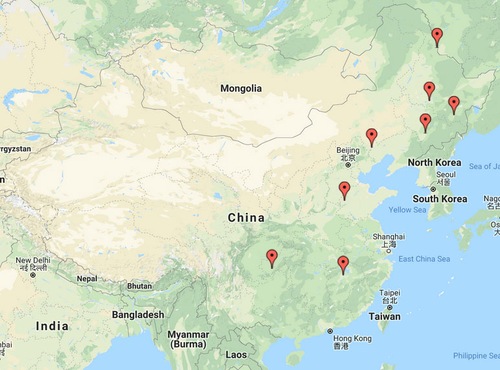 Ms. Zeng Deyun was arrested at home by officers from the Jiangnan Police Department on October 10, 2018. She was taken to Aimin Procuratorate and the police handed her case over to the Procurator, who previously released Ms. Zeng on bail pending trial. Ms. Zeng was released that day.

The police went to Ms. Zeng's home again on October 11, 2018. They demanded that Ms. Zeng go to the Procuratorate to sign documents. She refused. Since then, the police have taken turns monitoring her outside her home.

Mr. Liu Qingfu's wife, 70, was harassed at home by officers from the Xinfa Police Station in Xuejia, Daoli District on September 26, 2018. The police demanded she disclose the whereabouts of Mr. Liu and his daughter Ms. Liu Wenru.

Mr. Liu and Mr. Guo were handcuffed and taken to the Panshi City Domestic Security Division. They are detained at the Panshi City Detention Center and their arrests were approved by the Panshi Procuratorate on April 20. Ms. Zou and Mr. Chen were released on bail pending trial.

Mr. Liu and Mr. Guo's cases were reported to the Panshi Court at the end of August. Ms. Zou was ordered to go to the Panshi Police Department where the police arrested her and then took her to Jilin City.

Ms. Zhou Sirong was sentenced during the second half of 2016 for sending stickers with information about Falun Gong. She served her sentence outside of prison due to her diabetes. However, she was arrested and taken to a prison hospital on July 22, 2018.

Mr. Chen Dezhong was arrested in June 2016 and his whereabouts are still unknown.

Ms. Jiang Linying was recently arrested at home and had her home ransacked by officers from the Heihe City Domestic Security Division.

Ms. Liu Yongying, Ms. Wen Yan, Mr. Xie Mingjin, and Ms. Yan Jinhua were arrested in April 2018 and detained at the Nanchang No. 1 Detention Center. The police from the Qingshanhu District Domestic Security Division broke into and ransacked their homes. They fabricated charges against the four practitioners and submitted them to the Xihu District Procuratorate.

Ms. Lin Yanmei, her sister Lin Linzhen, and nephew Wu Zhaoqi from Shuidong Town, Dianbai District were arrested by police at the end of August 2018. Their arrest has been approved by the Dianbai District Procuratorate on October 1.

Mr. Wu’s attorney went to visit him at the Maoming No. 1 Detention Center on the morning of October 11, 2018. He learned that the procuratorate had illegally interrogated Mr. Wu.

Ms. Xu Xiujuan was arrested on June 7, 2017 and held in the Qinhuangdao No. 1 Detention Center. She was forced to take medicines and was severely tortured in the detention center. She was also shackled heavily for nine days.

The Haigang District Court tried Ms. Xu on September 26, 2018. The trial only lasted about 30 minutes due to her physical condition. She is still being held in the Public Security Hospital. Her condition is critical. She has high blood pressure, anemia, and heart failure.

Ms. Dong Xiangru, age 73, received a call from court on October 10, 2018, saying that she would be tried and the decision would be made the next day. She did not have time to inform her attorney. Ms. Dong went to the court with her family. The decision was announced immediately after the trial began. Ms. Dong was sentenced to two and a half years’ imprisonment and fined 20,000.

Ms. Dong was brought back to the court. The sentence was changed to residential surveillance. Currently, Ms. Dong is preparing to appeal.

Ms. Liu Guirong was sentenced to two years in prison by the Beichen District Court in Tianjin in September 2018. She has been taken to the Tianjin Women's Prison.

“A Taxi Driver Tells His Story”