The Hague, Netherlands: “You Have the Courage to Expose the Persecution!”

(Minghui.org) Falun Gong practitioners held a two-day event during Chinese Premier Li Keqiang's visit to the Netherlands, to raise awareness of the brutal persecution of Falun Gong in China. From October 15 to 16, practitioners exposed how their counterparts in China have been arrested, tortured, maimed, or even killed for their organs since former Chinese dictator Jiang Zemin launched the persecution of Falun Gong in July 1999. 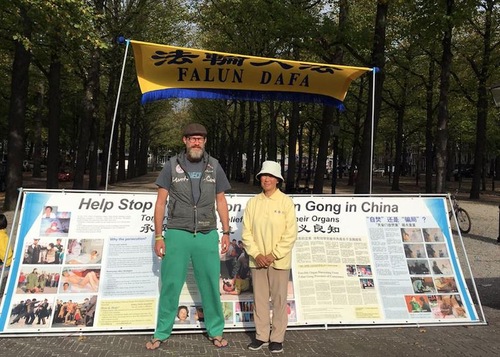 Erik with Falun Gong practitioner Ms. Wang at an event calling for an end to the persecution in China.

Their peaceful protest near the Dutch Parliament in the Hague drew applause from a gentleman named Erik. He said, “You have the courage to expose the persecution. I'm so proud of you!”

Many people signed the petition to call for an end to the persecution. The event gave many – including Members of the Dutch Parliament, representatives of international organizations, and students – an opportunity to learn about the illegality of the persecution. One student offered to organize a speech about human rights at school and wants to invite Falun Gong practitioners to tell their stories. 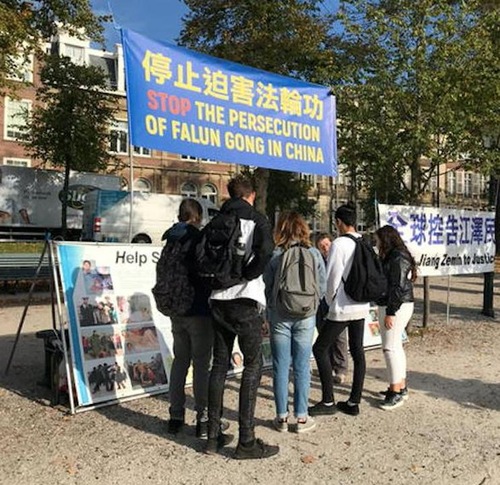 Students in the Hague read about the 19-year-long persecution in China.

Algemeen Dagblad, a Dutch daily newspaper, interviewed Kayan Wong, spokesperson for the Falun Dafa Association of the Netherlands. Wong told the reporter about Truthfulness-Compassion-Forbearance, the core principles of Falun Gong, also known as Falun Dafa. She said that Jiang Zemin has been sued by many practitioners for genocide and crimes against humanity and that he should be brought to justice in court. 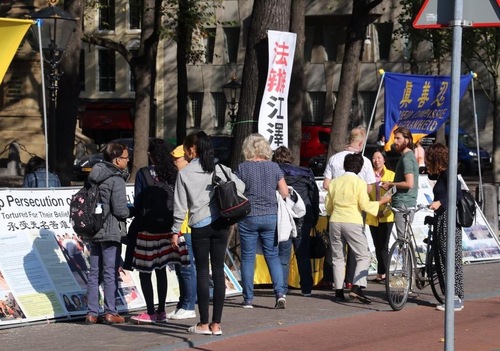 The newspaper also published a short video, which included peaceful demonstrations of the Falun Gong exercises, on its website.