(Minghui.org) Two members of the Czech Chamber of Deputies, Dr. Olga Richterová and František Kopřiva, spoke at the Falun Gong protest in front of the Chinese embassy in Prague last Thursday, expressing their support for the peaceful resistance against the persecution in China. 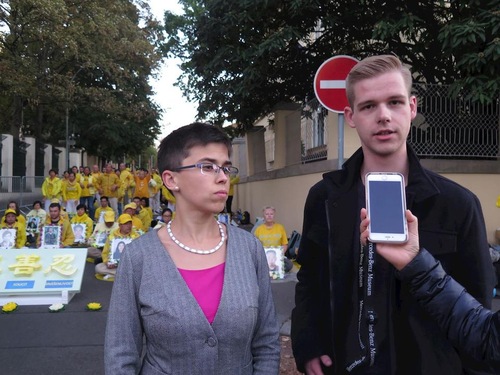 Members of the Czech Chamber of Deputies Dr. Olga Richterová and František Kopřiva, both of the Pirate Party, at the Falun Gong rally on Thursday

At the protest, Falun Gong practitioners from several European countries submitted an open letter to the newly-appointed Chinese ambassador, calling for an end to the 19-year persecution of the spiritual practice in China. 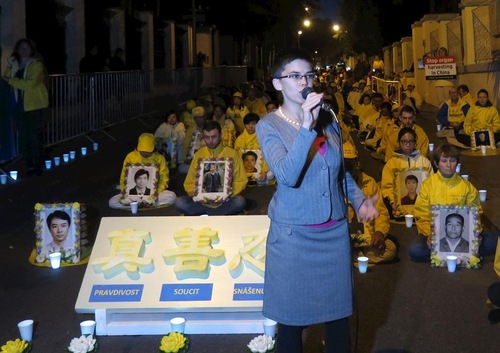 Dr. Olga Richterová said in her speech that the first step we need to take is to let people know about the persecution in China. She said her colleagues and she are willing to speak up on behalf of Falun Gong in the Czech legislature and the European Union Parliament to tell the lawmakers about the human rights crisis in China, including the state-sanctioned forced organ harvesting.

Citing the old Czech saying “The truth will win,” she saw the words Truthfulness-Compassion-Forbearance on practitioners' T-shirts and said, “Compassion will win.”

Veronika Sunova, the spokeswoman for the Falun Dafa Association in the Czech Republic, read the open letter to the Chinese ambassador. She pointed out that the former head the Chinese Communist Party, Jiang Zemin, who launched and directed the persecution, and his followers have brought disasters to China and the whole world. She called for them to be brought to justice. 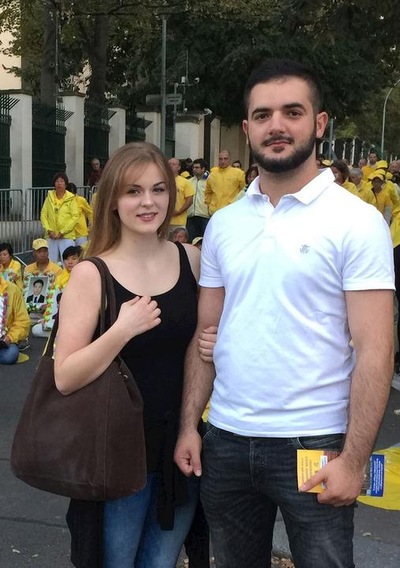 Behar Kaciu and Angelina Dorokhova believe that practitioners' effort will be a blessing for the children.

Many people stopped by the protest to express their support.

Tourists Behar Kaciu and Angelina Dorokhova expressed their respect and praised the practitioners for their courage and their efforts to tell the world about the persecution.

“The Communist Party is still suppressing people in China. Falun Gong's efforts will be a blessing for the children,” Kaciu said.