(Minghui.org) The European Tian Guo Marching Band performed for the first time at Loewenplatz in Lucerne, Switzerland, on October 6, 2018. Tourists from around the world were fascinated by the music and appreciated the opportunity to learn about Falun Gong, a traditional mind/body cultivation practice from China. Many tourists from China decided to quit the Chinese Communist Party (CCP) and its affiliated organizations after hearing about the CCP's brutal and ongoing persecution of Falun Gong practitioners in China. 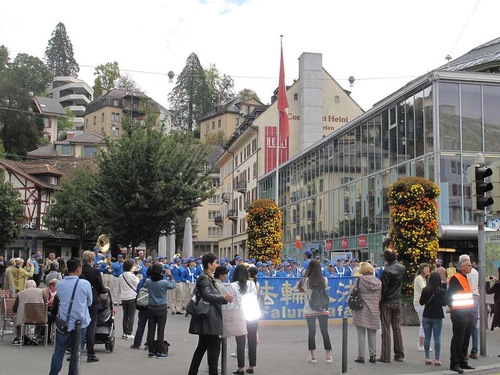 The band began their performance around noon near the Lion Monument at Loewenplatz. This central location is visited by crowds of people, including many tourists from China.

A Falun Gong practitioner approached three young Chinese couples who were watching the band performance, and asked if they were enjoying the music. They replied “Yes,” but said that they didn't know the name of the particular song being played.

The practitioner told them, “It's called 'Falun Dafa Is Good,'” then smiled and said, “Remember that Falun Dafa is good, and you will be blessed. It's a rare opportunity for you to hear the Tian Guo Marching Band.” “Yes, we are lucky,” they replied with a smile.

The practitioner added, “The Chinese Communist Party persecutes Falun Gong practitioners. You can't hear a band like this in China.” One of the young men said, “It (the CCP) is afraid of Falun Gong!” The practitioner replied, “All you young people know the facts well. Why don't you quit the Communist organizations? You will be blessed even more!”

The couples gathered around the practitioner, chose their pseudonyms, and quit the Communist organizations that they'd joined before.

Most Chinese people were angered by Jiang Zemin, former head of the CCP responsible for the persecution, on hearing that he initiated the atrocity of organ harvesting from living Falun Gong practitioners. Some went so far as to declare that they wished him dead.

A practitioner said, “He must be living for his trial. Do you know how many people have filed lawsuits against him for his bloody crimes? How can he escape punishment? You don't want to be buried along with Jiang. Quit the Communist organizations to be safe!” Four tourists decided to quit right away.

A Falun Gong practitioner approached a Chinese couple who were taking pictures of the lion statue and told them, “The lion reminds me of the persecution of Christians two thousand years ago. The Roman Empire threw Christians into arenas to feed the lions. Falun Gong practitioners in China are facing a similar persecution today. Jiang Zemin instigated the crime of harvesting organs from living practitioners for profit in organ transplantation surgeries. But the wicked will be punished. Four plagues in Rome killed countless people, including those who took pleasure in watching lions eat Christians. Nero received his retribution too. The current Chinese regime has done the same thing as the ancient Romans. They demonized Falun Gong, incited hatred against practitioners, and put Chinese people in the position of the Roman citizens. Isn't it scary to think about the consequence?”

The couple listened silently, eyes downcast. The practitioner said, “The good news is that quitting the Communist Party is our retreat to safety.” The couple cheered up and said, “Thank you! Please help us quit!”

As big groups of Chinese tourists walked by the Falun Gong display, they slowed down or stopped to listen to practitioners, then appeared pleased and relieved after quitting the Communist organizations. Smaller groups of Chinese shoppers readily agreed to quit the CCP as well.

A middle-aged couple told a practitioner who talked to them about Falun Gong, “Yes, we know.” When the practitioner asked if they had joined the Communist Party, the husband said, “Who would join that?” The practitioner then suggested that they quit the Communist Youth League and Young Pioneers, which most Chinese people join as youngsters. The couple answered, “Yes, please! That's great!”

A few elderly tourists didn't understand the significance of quitting the Communist organizations. A practitioner explained, “You raised your fist and vowed to give your life for the cause of Communism. When the Communist Party is doomed, you will be buried along with it. Announcing your withdrawal will void your vows and ensure your safety.”

One of them said, “Oh, that's why! We should hurry up and quit. Let's void those vows!” The other older tourists in the group firmly agreed.