(Minghui.org) Ms. Zhang Peiying, 43, and Ms. Hou Qiaozhen, 77, are being held in the Handan City No. 3 Detention Center in Hebei Province. Both women were reported for talking to people about Falun Dafa near the Pengjiazhai area in Fuxing District on the afternoon of May 16, 2018. They were arrested by officers from the Pengjiazhai Police Station.

Ms. Zhang has been tortured in the “Stretching Bed” (also known as “tearing the body, limb by limb by five horses”) for two days. 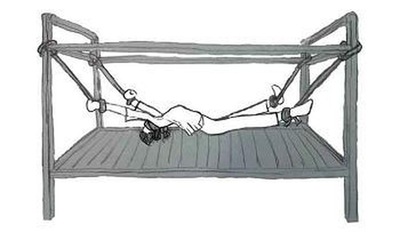 Because she talked to others about Falun Dafa in the detention center, Ms. Zhang was locked in solitary confinement for several days before being tortured on the “Stretching Bed” for refusing to write a “transformation” statement and a guarantee statement.

Ms. Zhang was tied to the “Stretching Bed” for two days and nights. She was in pain and could not stand or walk for several days afterward. The guards tried to force her to write the statements again, but she refused.

The guards at the detention center use this torture method because it leaves no visible scars on the practitioners' bodies. The practitioners are subjected to prolonged stretching and pulling in all directions, which results in severe pain. The torture causes blood flow to slow down for an extended period of time, causing blood stasis, thrombosis, and blood vessel blockages. As a consequence, victims often suffer from myasthenia gravis, brain hemorrhages, thrombotic blockages, or paralysis, and in severe cases, death.

“Improving While Working on a Shen Yun Project”