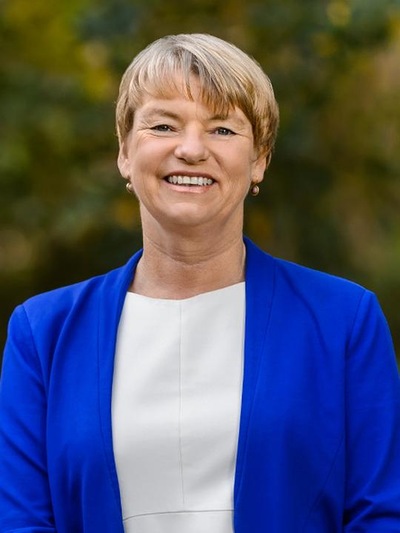 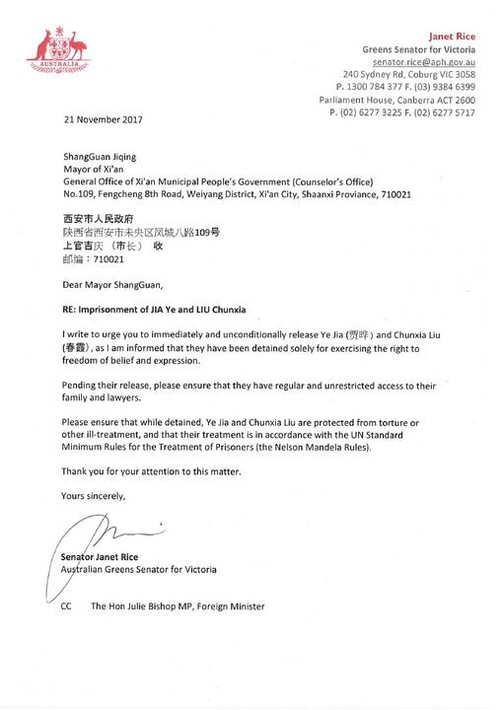 The letter sent to the mayor of Xi'an

Mr. Ye Jia, whose wife, Ms. Li Liu, is an Australian citizen, was arrested last September and was sent to a local brainwashing center in Xi'an, Shaanxi province. Li Liu's sister, Chunxia Liu, has been imprisoned since March 22, 2017.

Senator Rice said in her letter: “...I am informed that they have been detained solely for exercising the right to freedom of belief and expression.

“Pending their release, please ensure that they have regular and unrestricted access to their family and lawyers.

“Please ensure that while detained, Ye Jia and Chunxia Liu are protected from torture or other ill-treatment, and that their treatment is in accordance with the UN Standard Minimum Rules for the Treatment of Prisoners (the Nelson Mandela Rules).”

The Australian Foreign Affairs Department has been concerned about this case since Li Liu submitted a petition signed by citizens to the parliament in June 2017. The Foreign Affairs Department replied to Ms. Liu, and pointed out that the Chinese government's treatment of Falun Gong violates international human rights standards, and the Australian government often brings up the human rights crisis to the Chinese government.

In March 2017, Li Liu's mother, Yuhua Li, and sister, Chunxia Liu, were arrested at home. Yuhua Li was sent to a local brainwashing center and was released in June. She has been spied on and harassed by the police since August.

In September, Li Liu's husband, Ye Jia, was arrested and was sent to a brainwashing center. He was released on December 21.

“Podcast (Cultivation): “I Rescued My Mom Only After I Cultivated Righteous Thoughts””