(Minghui.org) Today's news from China includes incidents of persecution that took place in 8 cities or counties in 5 provinces. According to this report, 1 Falun Gong practitioner was subjected to mistreatment during their detention, and at least 14 were illegally arrested. 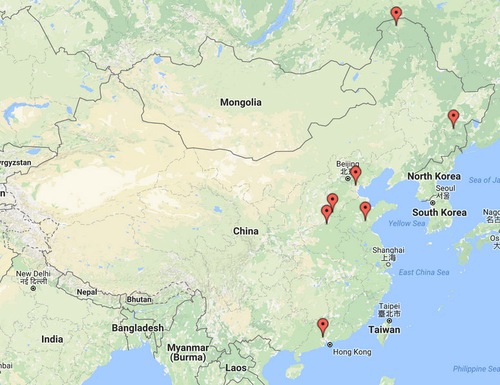 Ms. Song Guixiang, in her 50s, from northeastern China, works at the Huarun Supermarket in Tanggu District, Binhai New Area. She was arrested at work on the morning of August 10, 2017. The police ransacked her home and confiscated Falun Gong books. She is held in a detention center.

Ms. Liu Jingmei, Ms. Liu Xia, Ms. Gao Wenqin, and Ms. Liu Taiqiu were arrested by officers from the Zhongxinjie Police Station on the evening of July 12, 2017 for hanging up Falun Gong banners. They are held in the Linyi Detention Center.

Ms. Tang Huiling, Ms. Xu Yongmei, and Ms. Huang Yuzhen were arrested and taken to the Guicheng Police Station on August 9, 2017 for talking to people about Falun Gong in the Guicheng area. They are held in the Guicheng Detention Center.

Ms. Song Xianxia was arrested by Zhao Yanbing, Party Secretary of the No. 2 Yulin Village, and six officers from the Liuying Township Police Station at noon on August 10, 2017. The officers ransacked her home and confiscated some Falun Gong banners. She was taken to the Yongnian District Domestic Security Division, where she was interrogated. They also took photos of her. She was forced to have her fingerprints taken and blood samples were drawn from her. Ms. Song was then taken to the No. 1 Detention Center. She was brought home by her family after she failed the physical exam.

Ms. Hao Jinye was reported for talking to people about Falun Gong at the Zhaogu Township farmers market on the afternoon of August 9, 2017. She was arrested by officers from the Zhaogu Township Police Station. She is held in the Huixian City Detention Center.

Ms. Li Yushu, nearly 70, was pushed to the ground and dragged into a police car by three officers from the Chezhan Police Station on July 31, 2017. She was taken to the police department, where she was interrogated. They also took photos of her. Ms. Li was released that day.

Two plainclothes officers and Dongping'an Residential Community staff broke into Ms. Han Honggui's home and ransacked it on the morning of August 4, 2017. They confiscated Falun Gong books, photos of the founder of Falun Gong, and a cell phone. Ms. Han is in her 70s.

Mr. Ding had just hopped on his bike to go to work on July 26 when a group of police came out of nowhere and searched him. When they found nothing they wanted, they produced three letters and six DVDs bearing Falun Gong messages and claimed that Mr. Ding distributed those items.

The police next ransacked his home without showing any ID or search warrant. They took Mr. Ding to the Gaoxing Police Station. When his family asked what evidence the police had to arrest him, one officer said, "We'll come up with some evidence later on!" The family was later deceived into signing a made-up interrogation record.

This is not the first time that Mr. Ding has been targeted for his faith. He was given 5 years in prison back in 2008.

A married couple in Tianjin was sentenced to prison on August 11, 2017 for refusing to renounce Falun Gong.

Ms. Jiang Yahui and her husband, Mr. Yang Hong, were arrested on March 2, 2015 and tried on January 8, 2016. Ms. Jiang's mother recently called the local court and was shocked to learn that Mr. Yang and Ms. Jiang were each given 6 years in prison.

At the time of writing, the couple's family and lawyers still haven't received a formal verdict.

“My Son Regained the Ability to Speak Because of Falun Dafa”