(Minghui.org) Falun Gong practitioner Ms. You Xiuying, 72, was arrested by Shanghai police for passing out information about the persecution of Falun Gong on August 26, 2016. She was sentenced to a one-year prison term on May 19, 2017.

Authorities recently informed her family that because she still refuses to give up practicing Falun Gong, the 610 Office plans to transfer her to the Shanghai Brainwashing Center for “further education” when her prison term ends.

The Shanghai Brainwashing Center, also known as “Shanghai Legal Education School,” has been the 610 Office's secret detention facility, where practitioners are pressured to give up their belief through the use of coercive brainwashing.

According to information collected by the Minghui website, at least 279 practitioners have been detained in the Shanghai Brainwashing Center since the onset of persecution of Falun Gong in 1999, and 28 of them have been detained there multiple times. 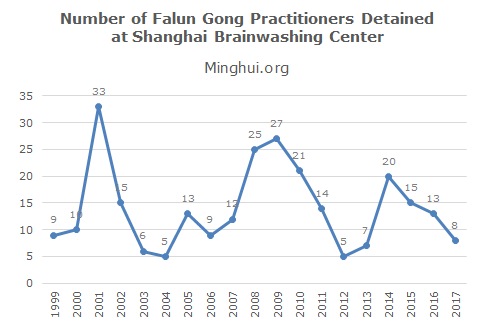 The 2001 peak may have been due to the notorious self-immolation hoax on Tiananmen Square in January 2001. The staged propaganda stunt was promoted nationwide in China as the communist regime tried to find justification to continue the persecution. It also signaled an intensification of the persecution of Falun Gong.

The peak in 2009 could be attributed to the 2008 Beijing Olympics, when the authorities clamped down on all dissidents. The number of practitioners detained in the brainwashing center increased from 12 in 2007 to 25 in 2008, and peaked at 27 in 2009. 21 were detained in 2010 when Shanghai hosted the World Expo. The number of detentions dropped back to 14 in 2011 after the conclusion of the big events.

Among the practitioners who have been detained in this brainwashing center, some were deceived or forced by the police and neighborhood committee staff to show up, while others were transferred directly from prisons, labor camps, or detention centers after their terms expired.

The authorities sometimes threaten the practitioners with termination of their salaries or even their jobs in order to force them to show up.

In some cases, the police arrest the practitioners and take them to the brainwashing center.

Headed by Jiang Qiqiong, the former head of Shanghai Forced Labor Camp with a background in psychology, the Shanghai Brainwashing Center has a specific set of procedures to brainwash practitioners and force them to give up practicing Falun Gong.

Each practitioner is detained in a separate room. They aren't allowed to leave without permission or talk to other detained practitioners. Two staff members monitor them around the clock and record everything they do in order to make personalized brainwashing plans. The staff also determines whether or not to allow the practitioners to contact their families, based on how they think that contact or lack thereof will increase the success of the brainwashing.

To increase their mental stress, the practitioners are not told beforehand how long they will be detained. The brainwashing center also determines whether they are “qualified to graduate” based on how much they are “transformed.”

Unlike prisons and labor camps, the living conditions and food in the brainwashing center are excellent. It is a ploy to disguise the intent of what goes on inside. While enjoying such comforts, some practitioners lower their guards and cooperate with the brainwashing.

Once admitted to the brainwashing center, each practitioner is told to fill out a form. That is the first test, giving the staff a clue as to whether or not the person can be successfully brainwashed.

During daily brainwashing sessions, practitioners study the Constitution, criminal law, and other regulations intensively in an effort to make them think that they have violated the law by practicing Falun Gong.

At the end of each session, they are required to write down what they learned. Sometimes they are also required to answer questions about themselves. The answers are used by the staff to look for weakness that can be targeted by brainwashing.

If the practitioner continues to go along with the brainwashing, the staff makes them think that Falun Gong is not good and that they shouldn't practice it.

After the practitioners are released, the brainwashing center staff makes regular follow-up phone calls or home visits as a way to reinforce their “brainwashing results.”

For many practitioners, the intense brainwashing and intimidation in the isolated setting of the brainwashing center was too much to bear, which sometimes resulted in a mental breakdown or rapid deterioration in health.

Ms. Yu Jingyan was taken to the brainwashing center and subjected to intense brainwashing in August 2012. By the time she was released in late 2012, she started to have symptoms of a stroke. She was hospitalized for two weeks and now suffers from paralysis on one side of her body.

Ms. Wang Yijin also suffered a heart attack during her 87-day stay at the brainwashing center in 2014.

If practitioners resist the brainwashing, the staff uses psychiatric drugs or physical torture in attempts to “transform” them.

Mr. Wu Liyou was taken to the brainwashing center in 2012. The staff mixed neuro-toxic drugs into his food in order to damage his memory and convince him to give up practicing Falun Gong. The head of the local 610 Office talked with Mr. Wu regularly and realized that he was still holding onto his belief, so they increased the drug dosage.

When Mr. Wu was released a month later, he had symptoms of Alzheimer's, and his family noticed that his memory had severely deteriorated. He had also developed itchy red blotches all over his body.

Mr. Du Zhilong, 74, was held in the brainwashing center in 2014. He was in good health when he first arrived, but a month later his memory, hearing, and vision had deteriorated significantly. He can no longer carry on a conversation and has difficulty thinking. It is believed that he was given neurotoxic drugs.

In addition, five female practitioners have suffered mental collapse, showed signs of dementia, and were unable to speak after being injected with psychiatric drugs in 2005.

Mr. Lin Mingli was sent to the brainwashing center in 2001 after he was arrested for having Falun Gong materials. Originally he was told that he would be held there for a month, but the authorities extended his term twice because he refused to give up practicing Falun Gong.

When Mr. Lin went on a hunger strike to protest the detention, the brainwashing center staff force-fed him. They repeatedly pulled the tube in and out of his stomach to increase his suffering. They did this many times, until his esophagus was ruptured. He was shaking from the intense pain during the force-feeding. The tube was covered with blood, and his mouth was also filled with blood. He was then taken to a hospital for emergency treatment.

When Falun Gong practitioners are persecuted in the brainwashing centers, they aren't the only victims. Their family members also suffer from the stress of the persecution and constant worry about the safety of their loved ones.

Some practitioners are the only breadwinners at home, so their absence causes tremendous financial pressure for their families.

Teacher from Shanghai Given Neurotoxic Drugs at Fengxian Brainwashing Center

Gaining Freedom After Being Rescued by Canada: Mr. Lin Mingli Shares His Experience of Persecution in China

Mr. Ye Xiaoping Faces Unlawful Trial, His Mother-in-Law and Wife Hospitalized Due to Abuse in Detention

“Business Manager: My Future Is Bright Because of Falun Dafa”