(Minghui.org) Near 9900 Puxing Road in the Fengxian District of Shanghai is a four-story building with a sign reading, “Shanghai Law Education School” at the entrance. This is a brainwashing center specifically designed for persecuting Falun Gong practitioners. Many practitioners were detained and tortured there in May 2014.

Bowing to the wave of condemnation of the “re-education through labor” system and calls for its disintegration from abroad and in China, the forced labor camps were finally abolished in late 2012. Accordingly, the forced labor camp in the Qingpu District of Shanghai was dismantled. After losing that facility, the 610 Office moved the brainwashing center in front of the Qingpu Labor Camp to the four-story building mentioned above.

During the CICA summit in May this year in Shanghai, arrests of Falun Gong practitioners increased. According to incomplete statistics from Minghui.org, about 57 practitioners from Shanghai have been arrested since January 2014. Some were sent to the brainwashing center, while others are still missing.

Below is a partial list of practitioners who have recently been persecuted in the brainwashing center in Shanghai: 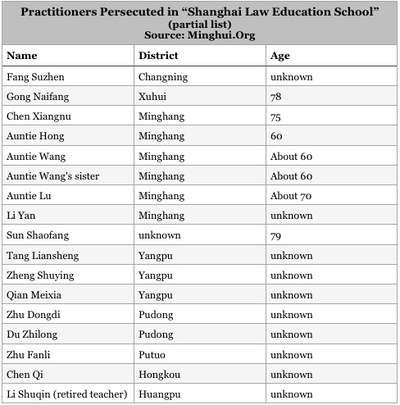 The ground floor of the brainwashing center has six to seven cells. Every cell has an air conditioner, washroom, three beds, and a desk with a timetable and a “kind reminder” on it. All the windows are barred.

On the second floor is a conference room and a classroom. A “principal,” two “directors,” about two dozen “instructors,” several janitors, and chefs make up the staff. They all call each other “teacher.” Practitioners detained there are also forced to call them “teachers.” These “teachers” are careful to conceal their real names.

Three meals are served each day by the canteen staff. The food is plentiful and varied. From the layout to the staffing and the calculated ambiance, at first glance most people would think it is, in fact, a school. In actuality, Falun Gong practitioners are brutally tortured here every day.

Practitioners are closely watched by the “instructors," and their movements are restricted. Because there is no legal documentation accounting for their arrests, practitioners cannot leave their cells at will, contact their families, or send correspondence. Brainwashing center authorities maintain absolute control.

The guards decide whether or not to allow practitioners to make calls to their families. All conversations are strictly monitored. The goal of the brainwashing center is to force the practitioners to give up their faith. Sometimes the guards lean on practitioners' families to apply extra pressure to “transform” them.

In fact, they are not “instructors” or “teachers” at all. Some are unemployed or laid-off laborers. They use despicable means, including lies and intimidation, in attempts to destroy Falun Gong practitioners' spirits.

The "Law School" and Its Illegal Activities

All along, the brainwashing center has announced to the outside that it is a “law school” or “law classroom.” In fact, its purpose is solely to defame and slander Falun Gong and its practitioners. It attempts to control practitioners' minds and indoctrinate them.

Far from being a "law" school, its "teachings" contradict the basic spirit of the law, of justice, fairness, and openness. For it to oversee the detention of practitioners is patently illegal. The brainwashing center is a black jail.

The brainwashing center has been involved in persecuting innocent citizens since late 2012. It doesn't even spare those over 70 years of age. Practitioners' families live in fear every day since they have no way of knowing the condition of their loved ones, nor can them contact them.

When practitioners' families try to inquire about the whereabouts of their loved ones, all the departments shirk their responsibility by not telling the truth. Under the Chinese communist regime, no one knows which department is responsible for detaining practitioners.

“Ancient Tales from China: “Straight Talk” with Royal Leaders for Benefit of the People (Part 2 of 3)”