(Minghui.org) The 28th Falun Dafa (also called Falun Gong) Nine-Day Workshop concluded at the Tianti Bookstore in Seoul, Korea, on July 12, 2017. New Falun Gong practitioners who attended the workshop shared their experiences and understandings with each other on the last day of the workshop. 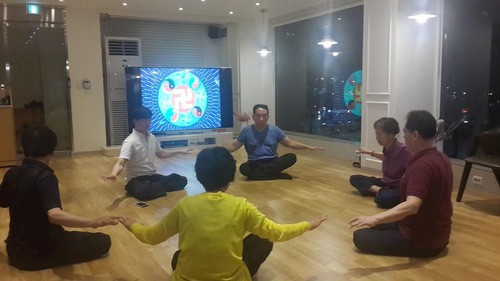 Mr. Choi from Suwon had learned the exercise movements a couple of months before attending the nine-day workshop. He said that Falun Dafa is a great practice and the only cultivation way of mind, body and spirit. “I felt a huge amount of energy when I was learning the exercises two months ago. It brought many changes to my health, but I didn't have a clear understanding of how to improve xinxing. I have learned a lot from this workshop, and realize how important it is to cultivate xinxing.” Mr. Choi remembered an incident a few months before. A man in the park yelled at him to move out of the way, and they bickered with each other. Choi said, “While listening to the lectures, I was deeply moved by Master's teaching about not fighting back.”

Mrs. Lee used to have rheumatoid arthritis. She had learned the Falun Gong exercises in order to ease her terrible pain, but didn't learn any of the principles of the practice. She resumed her learning by attending this workshop. Mrs. Lee said that she noticed great improvement in her health after these nine days. She said her shoulder pain was gone, and she didn't need to take medicine for her arthritis, high blood pressure or hyperlipidemia any more. Her mind, which was once foggy, became clear. Mrs. Lee also gained a clearer understanding of the importance of cultivating xinxing.

Mr. Kim had heard about the greatness of Falun Dafa before and he happened to see a group of Falun Dafa practitioners doing the exercises on the river bank one day. He decided to start cultivating. Mr. Kim said he reflected upon his own life after listening to the lectures. “I think one could build up a lot of karma in his life. Falun Dafa provides a way for people to dissolve karma through cultivation. I feel incredibly relieved. It's great! I can feel strong energy while doing the exercises. Besides my health, my xinxing also experienced a big change. I have better self-control as relates to various desires since I started my cultivation.” Mr. Kim use to have insomnia, but he slept very well during the nine days that he attended the workshop. He said he was determined to cultivate himself in this great practice.

Mrs. Cho is in her seventies. She had received a flyer about Falun Gong, which made her want to practice cultivation in this righteous way. She said, “My back felt very warm after doing the exercises, and my hands felt as if they were charged with electricity... I'm fortunate to get a chance to learn Falun Gong at my advanced age. I will work hard on my cultivation.”