(Minghui.org) Today's news from China includes incidents of persecution that took place in 14 cities or counties in 8 provinces. According to this report, 6 Falun Gong practitioners were subjected to mistreatment during their detention, and at least 27 were illegally arrested. 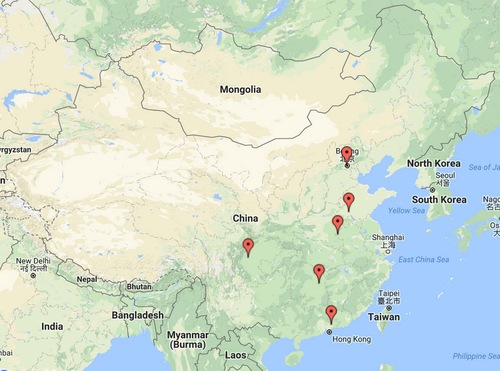 Ms. Fan Ying, Ms. Gao Guixiu and Ms. Yan Lijun, from the Lianhua Residential Community in Shuangliu County, were arrested on August 15, 2017. Ms. Gao has been released due to health reasons, while Ms. Fan and Ms. Yan are held in the Shuangliu Detention Center.

Ms. Li Xiaofang from Zhenzhuang Natural Village in Sunmiao Administrative Village, Tanpeng Town, went to Beijing to appeal for the right to practice Falun Gong on August 26, 1999. She was arrested and her whereabouts has been unknown for 18 years.

Ms. Wang Chuanfeng and a female practitioner surnamed Wu were arrested on August 24, 2017 and their homes were ransacked. They were later released that same day.

Ms. Cai Guanying was arrested on September 24, 2016. She was tried at the Huicheng District Court on December 6, 2016, and sentenced to 18 months in prison.

Ms. Cai appealed to the Huizhou City Intermediate Court, but without holding a hearing, the court upheld the original verdict on April 13, 2017. She was transferred to the Guangdong Province Women's Prison on June 16, 2017.

Ms. Yan and Ms. Tan have been released because of their age and high blood pressure. The other practitioners are being held in the No. 5 Facility, High-Tech Zone.

Ms. Gao Yunxia was arrested on October 13, 2015, and tried on April 11, 2017. The Yubei District Court sentenced her to five years in prison on August 31, 2017. She is appealing her case at the Yubei District Detention Center.

Previously, Ms. Gao was twice sentenced to prison, for a total of 8.5 years.

Retired police officer Mr. Li Congchun, 71, was sentenced to five years in prison and fined 5,000 yuan on December 29, 2016, for distributing fliers about the persecution of Falun Gong. He was transferred to Jidong Fifth Prison on March 1, 2017.

His son, Mr. Li Xiaoqiang, went to visit him at the prison on May 8, 2017, but was denied the visit by the guards. He pleaded with the guards for a quick meeting or a phone conversation with his father, but to no avail. The guards also refused to pass on the money to his father that he had brought for him.

Mr. Xie Yiqiang, 53, was arrested on September 4, 2016, for talking to people about the persecution of Falun Gong. He was sentenced to two years and four months in prison on April 21, 2017.

On behalf of Mr. Xie, several Yinchuan City residents filed an appeal to the Yinchuan City Intermediate Court, and a hearing was held on July 27, 2017. Mr. Xie's lawyer was illegally removed from the courtroom midway through the hearing for defending his client.

The higher court ruled to increase Mr. Xie's sentence to 3.5 years and fined him 5,000 yuan.

The lawyer representing her appeal case noticed that the electronic record of the police interrogation and court proceedings (including video recordings) were missing from her case file. He requested a public hearing, but judge Yin refused, and instead ruled to uphold the original sentence.

Ms. Wang Yanqiu was sentenced to four years of imprisonment on May 18, 2017. After she appealed her case to the Chaoyang Intermediate’s Court, she was retried on August 29, 2017. Her attorney defended her, entering a plea of not guilty. The court still used the fabricated evidence presented in the first trial, even though none of the eight “witnesses” were present.

Ms. Chao Shuxia, Ms. Wang Sirong and Mr. Xing Wei were arrested for hanging Falun Gong banners during the 2016 Chinese New Year. They have been held in the Nankai District Detention Center for more than 530 days.

The Nankai District Court held a second trial against them on the morning of August 30, 2017. The trial ended at 11:50 a.m. without a verdict.

Ms. Qu's attorney has appealed her case to the Jinan Intermediate Court.

Ms. Chen Changde was arrested while handing out informational materials about Falun Gong on the morning of August 18, 2016. She was held in the Shifang Detention Center for 15 days before being transferred to the Deyang Monitoring Center on September 2, 2016.

Ms. Chen was tried and sentenced to two years of imprisonment by the Shifang Court on December 6, 2016. She was transferred to Sichuan Women’s Prison in May 2017.