Falun Dafa Display in India: “Eighteen Years of Persecution Is Too Long”

(Minghui.org) In Ladakh, the northernmost part of India, at an altitude of 3,500 m / 11,480 ft in the Himalayas, two Falun Dafa practitioners set up a display on July 23 to raise awareness of the 18-year-long persecution of Falun Dafa in mainland China. Their poster read, “18 Years of Persecution Is Too Long.” 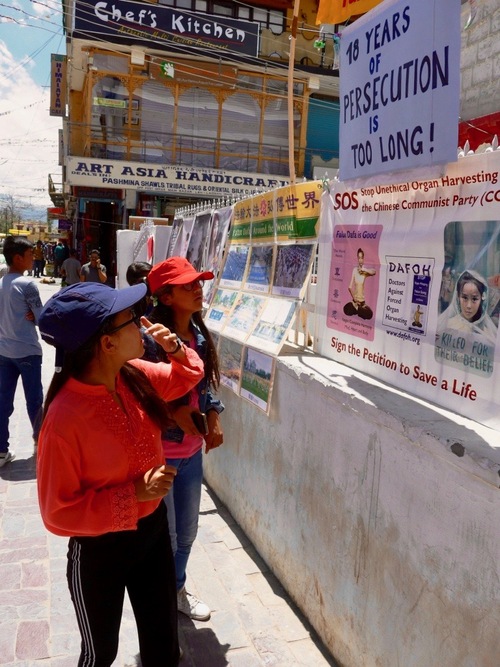 On the day marking the 18th year of persecution, a display with posters and banners helps people understand the facts about the persecution. 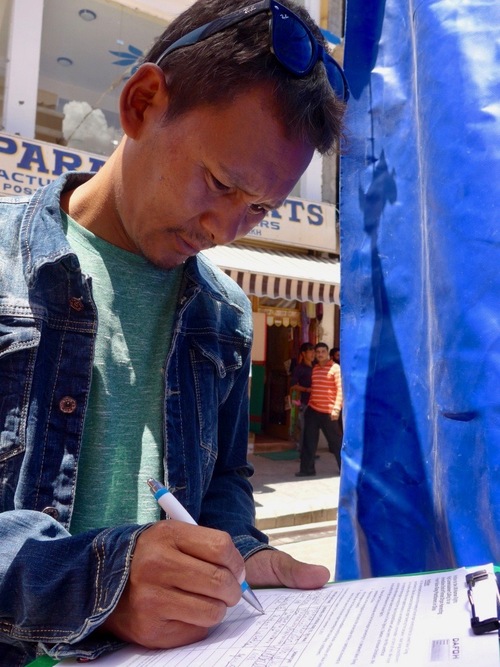 A local young man signs a petition by Doctors Against Forced Organ Harvesting.

On the main street of Leh, the largest city in Ladakh, the practitioners started early in the morning to arrange various posters and banners. They had with them flyers in more than 30 languages. They were supported by the owners of a local guesthouse and surrounding shopkeepers. 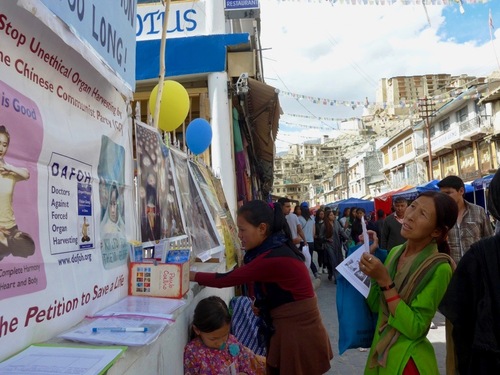 Many people are moved by the display about Falun Dafa in the main street of Leh, India, below Leh Palace, on July 23, 2017.

The practitioners had hardly set up everything when a local policeman walked up to sign a petition addressed to the United Nations to help stop the killing of practitioners for their organs in China. This occurrence was likely due to the efforts of a practitioner who had visited courts and police stations for years to distribute informational materials about the atrocities happening in China. 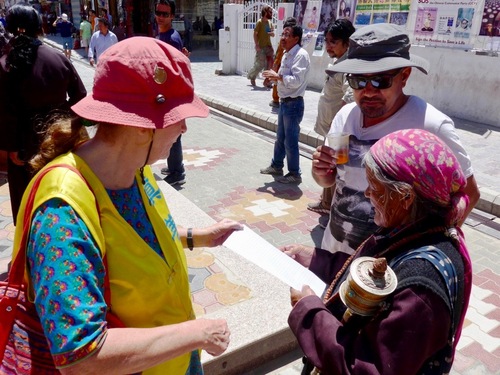 A Falun Dafa practitioner hands a Tibetan flyer to an elderly Ladakhi woman, who is holding a prayer wheel. 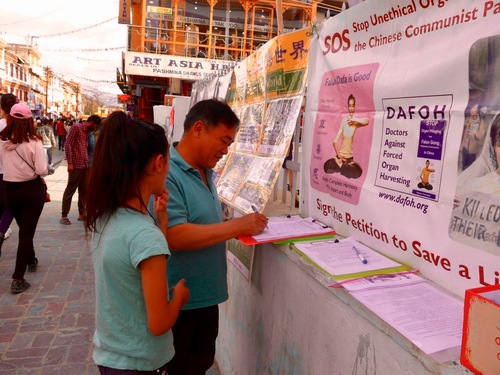 A Ladakhi man with his daughter signs the DAFOH petition.

As with displays in previous years, travelers of all ages from Ladakh and Kashmir, other parts of India, and even other places in the world responded heartily to the materials showing the beauty of Falun Dafa. They were deeply moved by the banners explaining the persecution, and found it difficult to believe that these atrocities were still happening today. Many followed the banner to sign the petition without being asked.

Many residents were grateful and happy to see again a Falun Dafa display in their city after a break of two summers. They also hope to see more displays in the weeks to come. Many of them thanked the practitioners, wished them good luck, and gave them words of encouragement. 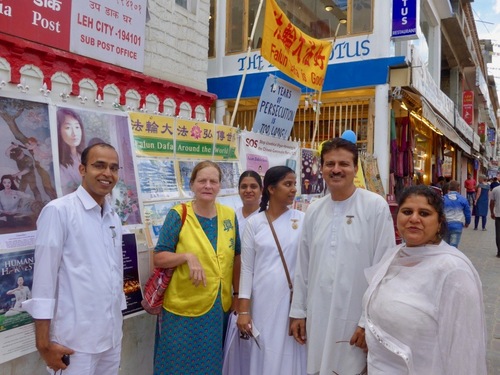 A group of Brahma Kumaris, a spiritual group from Gujarat, recognizes Falun Dafa from a previous event at their headquarters. 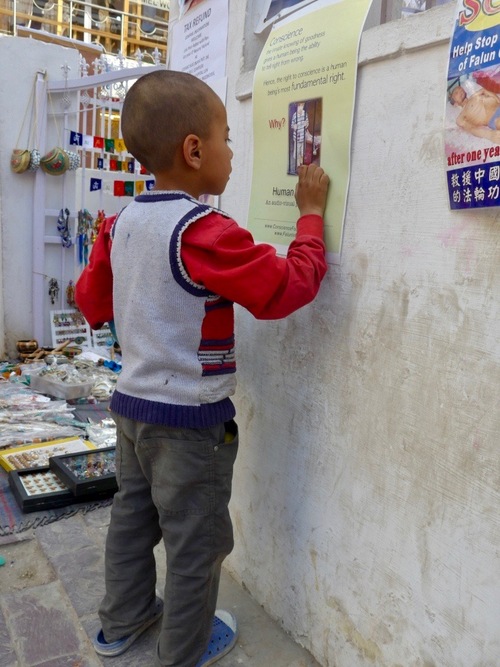 For a long time, an Indian boy looks at a painting showing a boy jailed in China with his mother for their practice of Falun Dafa. 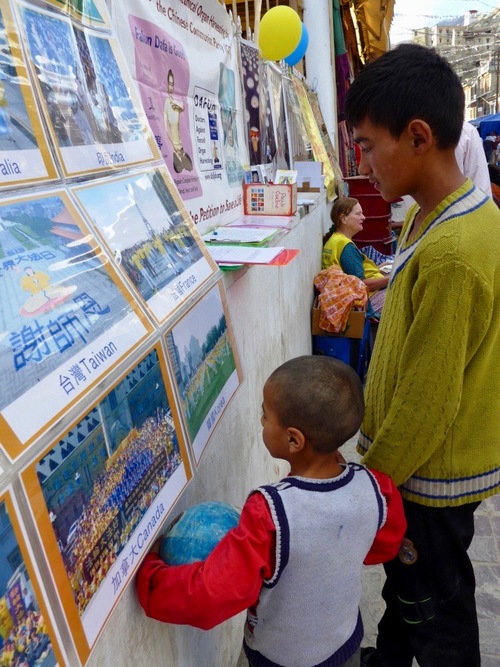 A boy and his older brother look at a display of people practicing Falun Dafa all over the world. 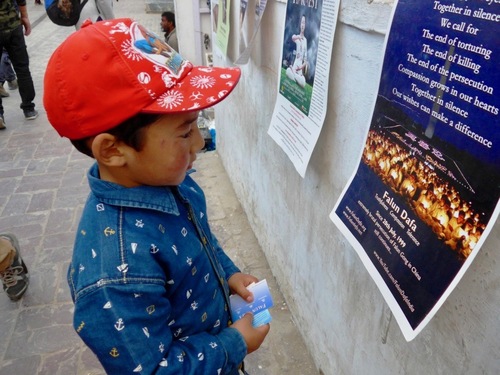 A boy holds two Falun Dafa bookmarks and looks at a poster of a candlelight vigil in Washington D.C., which commemorates practitioners who have died as a result of torture in China. 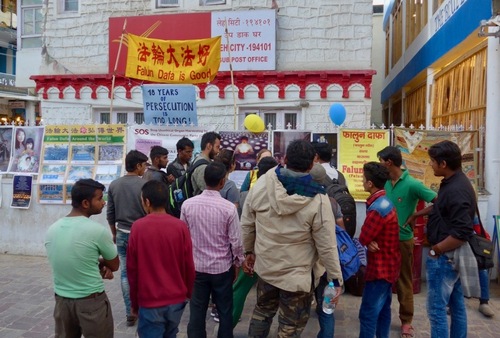 Many people listen to a Falun Dafa practitioner explain the atrocities currently happening in China.

“Worms, Germany: Raising Awareness of the Persecution of Falun Gong in China”