(Minghui.org) Falun Gong practitioners around the world have participated in community events throughout the summer, taking the opportunity to introduce this traditional spiritual and physical self-improvement practice to the public, and raising awareness of the 18-year persecution in China. This report covers five recent events spanning the globe from the Netherlands, North America, Indonesia, and Australia. 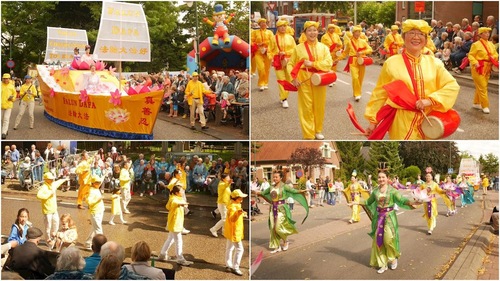 Practitioners passed out information about Falun Gong (also known as Falun Dafa) along the parade route. Many people were interested in learning more about the practice and asked for further information.

A local gentleman said to practitioners, “I come see this parade every year. This is your first time performing here. Your banner with 'Truthfulness-Compassion-Forbearance' on it, the drum team and beautiful float are very impressive. Very beautiful. I saw many people cheering when they saw the words on your banner.” 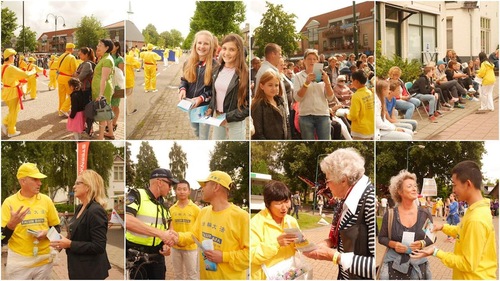 Spectators welcomed the practitioners and asked for more information about Falun Gong.

Practitioners at Arizona State University set up a booth during the new student orientation on August 16. They handed out informational materials and demonstrated the exercises.

Many students left their contact information on the sign-up sheet, interested in an upcoming free exercise workshop. A number of young people want to do something to help stop the persecution in China. Several Chinese students talked to practitioners, and changed their misunderstanding about Falun Gong. This was a great opportunity for them to speak with practitioners directly, which is difficult to do in China where Falun Gong is brutally persecuted. 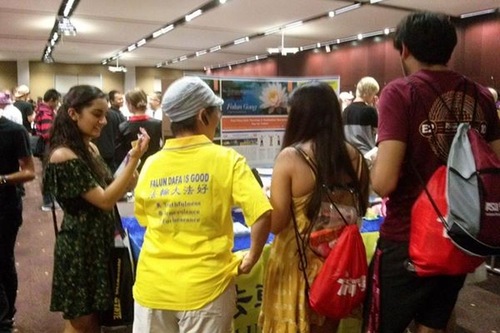 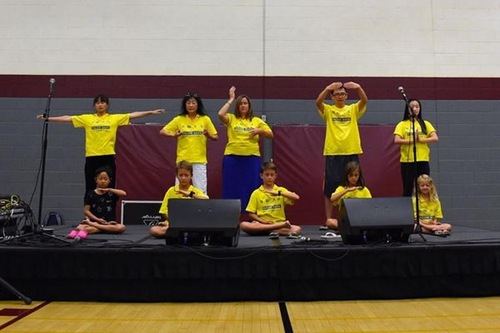 The path of totality of the recent solar eclipse crossed the capital city of Missouri, Jefferson City, one of seven American cities where NASA held live broadcasts of the eclipse. The City of Jefferson City organized a fair to welcome people who traveled from all over the United States to see the eclipse.

Falun Dafa practitioners from Missouri had a booth at the fair. 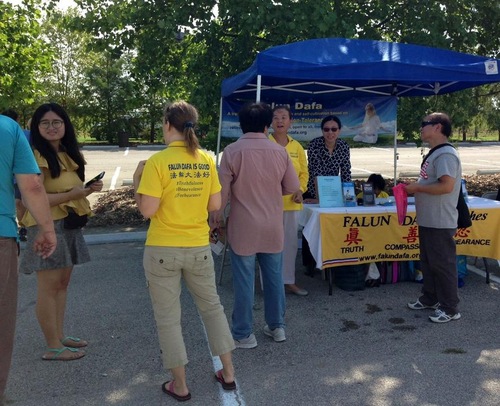 Practitioners talk to people about Falun Gong during the solar eclipse festivities in the Missouri State capital.

In addition to local area residents who attended the festival, visitors from Oklahoma, Iowa, Texas, Colorado, South Dakota, and even China stopped at the practitioners' booth to learn about Falun Dafa.

Many of them said they were looking for a meditation practice and would try to learn the practice online or at a practice site in their area.

Three women from Texas who stopped by were impressed with the moral philosophy of the practice and its healing effectiveness. They were surprised that such a peaceful practice is persecuted in China, but when they learned that the practice had grown to 70 million people there, outnumbering the Chinese communist regime, they understood that the regime banned the practice out of fear of the group's popularity.

Last weekend, practitioners from Indonesia held a cultivation experience sharing conference. During the conference, they also held a series of public activities to introduce the exercises and to call for support to help stop the persecution in China. 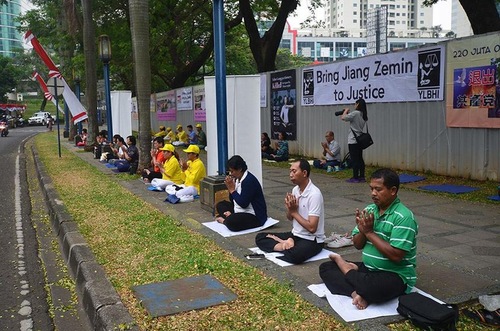 Peaceful protest in front of the Chinese embassy in Jakarta. 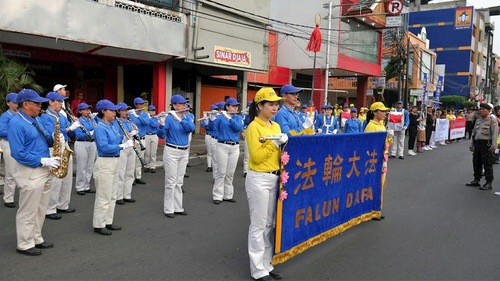 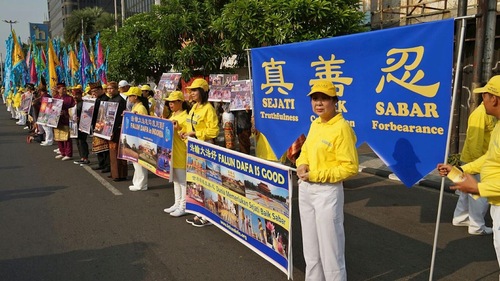 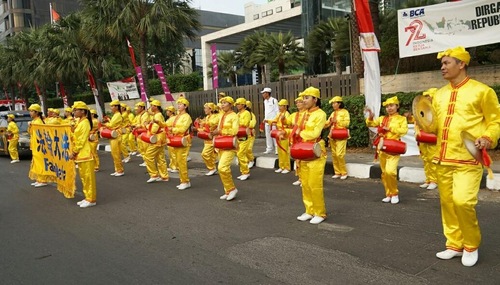 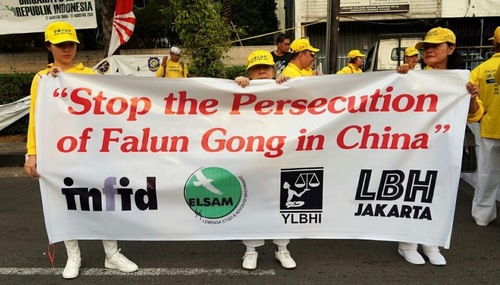 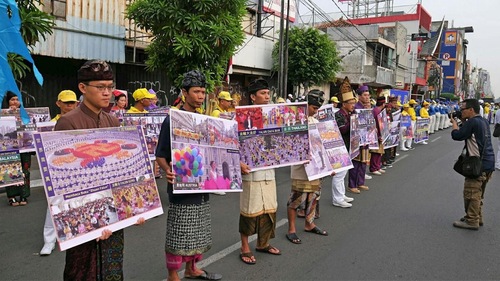 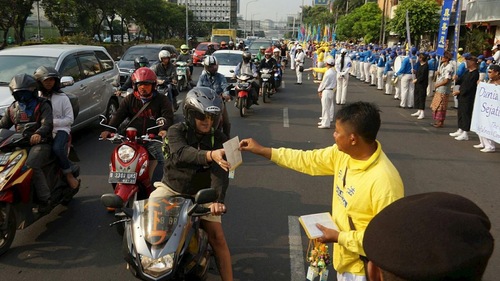 On August 19, practitioners staged a march through Jakarta and were warmly welcomed by the local citizens. 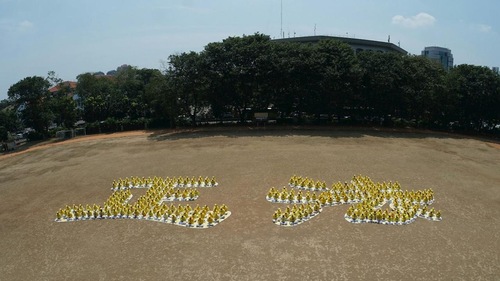 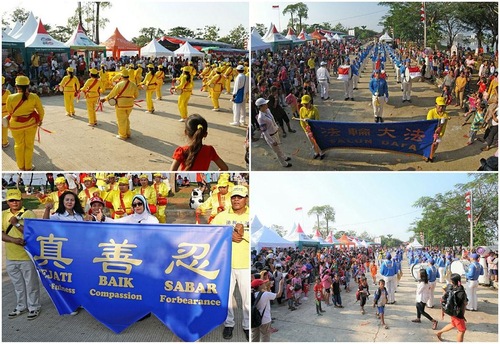 Practitioners were invited to perform at a public park in Jakarta.

Practitioners from Queensland, Australia, participated in the 12th annual Languages and Cultures Festival in Toowoomba last Sunday. About 18,000 people attended this popular multi-cultural event. Falun Dafa practitioners participated in the festival and had a booth, where they introduced the practice and demonstrated the exercises. 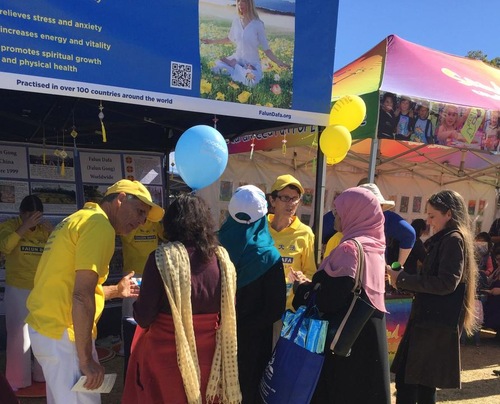 Falun Dafa practitioners' booth at the Languages and Cultures Festival in Toowoomba. 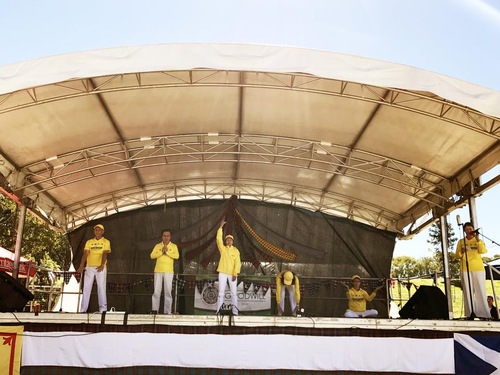 Demonstrating the exercises. A staff member for the event said he sensed the strong energy field from the stage. “I love the gentle movements. Thank you,” he said. 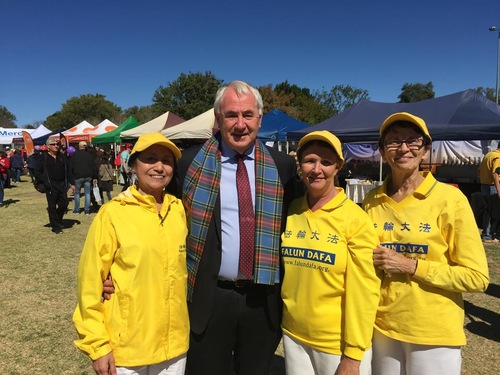 A woman from a town 40 miles from Toowoomba was excited to see practitioners at the festival.

“I always wanted to learn Falun Gong, but never got a chance,” she said. She invited the practitioners to her town to hold an introductory workshop. When the practitioners accepted her invitation, she exclaimed, “I am so lucky today!”