Taiwan: Experience Sharing Conference About Clarifying the Facts to People in China

(Minghui.org) Hundreds of Falun Dafa practitioners in Taiwan attended the annual experience sharing conference about talking to people in China, on August 6, 2017.

The practitioners gathered in Taichung to share their experiences and understandings. They expressed hope of doing better in informing people about the goodness of Falun Dafa, and raising awareness about the persecution. 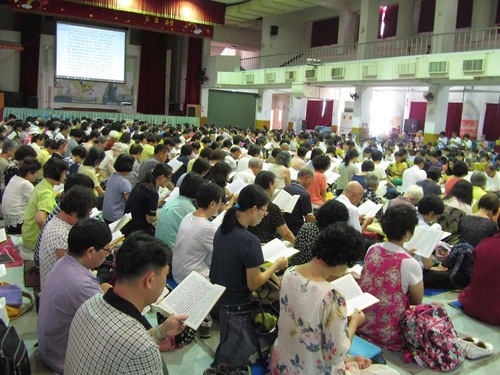 Hundreds of practitioners from across Taiwan gathered in Taichung to share their experiences.

Ms. Hsu has been clarifying the facts on the Internet. She talked about how she empathizes with the difficulties people encounter in their lives, and says that she focuses on topics they are concerned about. From the angle of the challenges they face, she points out that the root of China's chaotic society is the Chinese Communist Party (CCP), and that following the principles of Falun Dafa (Truthfulness-Compassion-Forbearance) is beneficial.

She said that many people practitioners talk to agree to quit the CCP.

A retired director of a 610 Office once asked Ms. Hsu to help him quit the Party using his real name. He also said that he did not care if his retirement pension was canceled because he quit the Party.

A stock investor from China who owns property in the U.S. asked why the former leader persecuted Falun Dafa, but not other faiths. Ms. Hsu patiently explained the facts to him and encouraged him to watch Shen Yun Performing Arts in the U.S. The man not only agreed to quit the CCP youth organization he had previously joined, but also said that he would support practitioners' truth clarification efforts financially when he returned to the U.S.

Referring to the slander spread on Chinese media he said, “I see things based on my observation. You are so kind and well-mannered, so I'm not against Dafa.”

Ms. Hsu said that the most challenging issue is people with ingrained concepts, due to being immersed in Party culture for their entire lives.

Ms. Zheng from Miaoli started clarifying the facts on the Internet shortly after she began practicing in 2001. She said that initially some people were rude. After they were given more information they gradually understood the facts, and their attitudes began to change. Many chose to quit the Party. She said that a few days ago, she met a student who quit the Youth League after learning the facts. The next day he talked to twelve of his friends and persuaded them to quit the Youth League.

Ms. Pan said that when she talks to people who are puzzled about why they need to quit the Party, she says, “The Party has been deceiving the public with fabricated news for years!”

Clarifying the Facts at Tourist Spots on Weekends

Ms. Lim started practicing Falun Dafa last year. Since last February, she has traveled to Taipei from Maoli on weekends to clarify the facts at a tourist spot.

He learned the facts about the CCP's forced organ harvesting and signed a petition calling for an end to the atrocities. Ms. Lim said she hoped that he could spread the news to more people.

Tourists from China Say: “Falun Dafa Is Good, Truthfulness-Compassion-Forbearance Is Good” Every Day

Ms. Liang said when she recently talked with a Chinese man at a tourist site, she asked if he had quit the Party. He replied, “I've done it already in China and I repeatedly say, ‘Falun Dafa is Good,’ ‘Truthfulness-Compassion-Forbearance is Good’ before I go to sleep every night.”

Ms. Chen has been traveling between Taiwan and Hong Kong to clarify the facts to Chinese tourists since 2013. A tour guide once approached Ms. Chen and asked if she was a Falun Dafa practitioner. The guide then rudely told Ms. Chen to stay far away from her tour group.

Ms. Chen remained calm and ignored the guide's bad attitude. She kept distributing newspapers. Suddenly, a young lady smiled at Ms. Chen, so Ms. Chen clarified the facts to her and helped her quit the Party. Afterward, several people in the tour group quit the Party. She later discovered that they were all from the group led by that tour guide.