(Minghui.org) Numerous events were recently held around the world to oppose the 18-year-long persecution of Falun Gong in China. Many government officials and citizens expressed their support for practitioners and hope for the atrocity to end soon.

Practitioners gathered in front of the Chinese Embassy in Paris on July 20 to raise awareness of the persecution in China. Many passersby signed petitions calling to end the brutality. 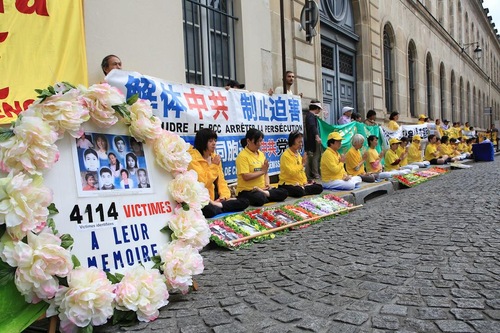 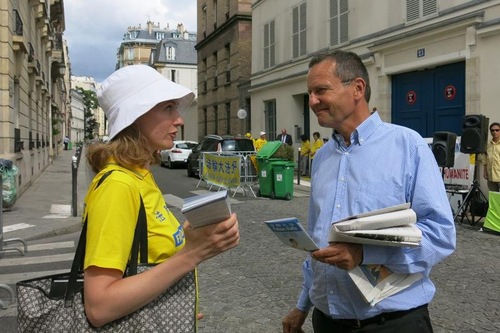 French practitioners gathered in front of the Chinese Embassy on July 20 to inform the public about the 18-year-long suppression of Falun Gong in China.

During the events, practitioners read out many letters from French officials, including one from Éric Alauzet, a member of the French Parliament who wrote to the Ministry of Foreign Affairs expressing concern for China’s killing of prisoners of conscience, mostly Falun Gong practitioners, for organs. He wrote, “On 12 December 2013, the European Parliament adopted a resolution on organ harvesting in China, recommending that Member States publicly condemn abuses of organ harvesting,” and requested further follow-ups on the matter.

Marie-Christine Dalloz, Kheira Bouziane-Laroussi, and other MPs also wrote a letter to the Ministry of Foreign Affairs, urging measures to help stop the organ harvesting crimes by the Chinese regime.

Practitioners went to Office of the United Nations High Commissioner for Human Rights (OHCHR) in Geneva on July 20, calling for action to help end the persecution of Falun Gong practitioners in China. 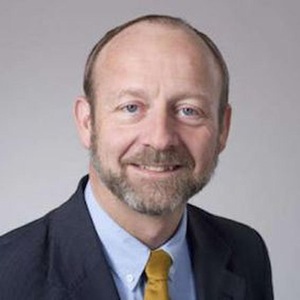 Dominique de Buman, Vice President of the Christian Democratic People's Party, said such a large-scale atrocity being committed against Falun Gong practitioners should be stopped immediately.

Many Federal Assembly members and Cantonal Parliament members wrote letters to support the practitioners’ event. Dominique de Buman, Vice President of the Christian Democratic People's Party, wrote that everyone should have the freedom of belief and that the persecution in China, especially forced organ harvesting, should be exposed to the international society.

National Councilor Lisa Mazzone said that, although China joined the United Nations Convention against Torture in 1988, it often mistreats its citizens. She requested help from the Federal Council to help end the persecution.

Czechian practitioners rallied at the Chinese Embassy in Prague on the morning of July 20. They not only demonstrated Falun Gong’s gentle meditation exercises but also re-enacted how practitioners in China are tortured for their belief in Falun Gong. 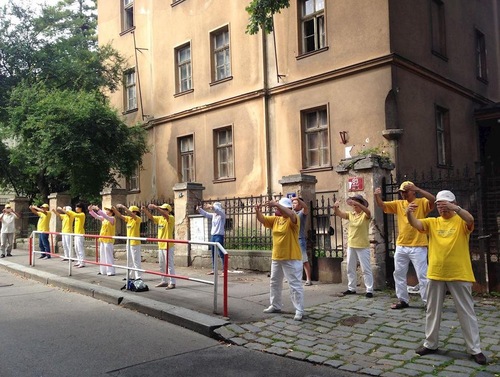 Group exercise demonstration by Falun Gong practitioners in front of the Chinese Embassy in Prague on July 20, 2017

News media Blesk and Novinky.cz, one of the most visited websites in the Czech Republic, interviewed practitioners. Veronika Sunova, President of the Czechian Falun Dafa Association, said, “We need support from all kindhearted people so that the crimes against Falun Gong practitioners, especially forced organ harvesting, can stop.”

Novinky.cz published an article on the next day entitled, “Before the Chinese embassy, he meditated against the persecution of Falun Gong adherents.” It reported that practitioners are often imprisoned and tortured in China for their belief. A report by Blesk on the same day said that Falun Gong is based on the principles of Truthfulness-Compassion-Tolerance and practiced by more than 100 million people in over 80 countries. 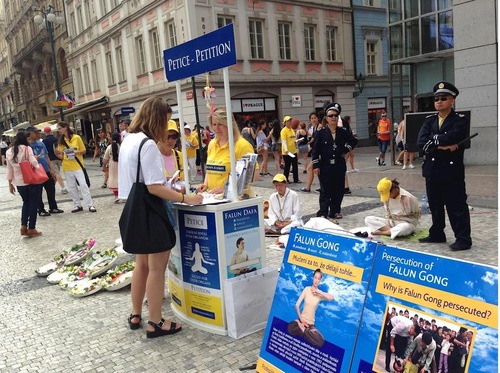 Anti-torture exhibition at Wenceslas Square (Václavského náměstí) in the afternoon 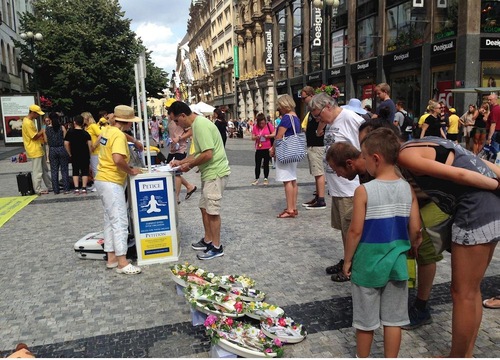 Practitioners continued the event at Wenceslas Square (Václavského náměstí) in the afternoon, followed by a candlelight vigil in the evening. Many people stopped to learn what is going in China and signed petitions to support practitioners.

Upon learning that 270 million Chinese have quit the Chinese Communist Party and its youth organizations, some Chinese tourists agreed to withdraw their memberships in the Party as well. 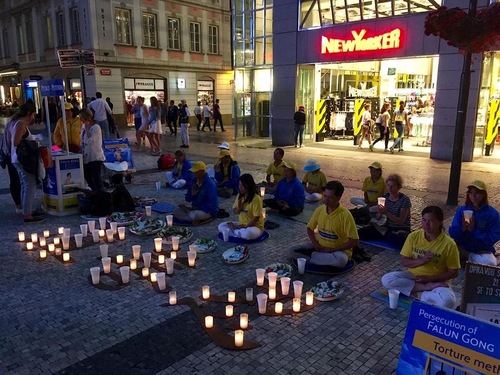 Candlelight vigil in the evening