San Francisco: Falun Gong Practitioners in the Bay Area Call for an End to the Persecution

(Minghui.org) Eighteen years ago, on July 20, 1999, the Chinese Communist regime instigated the persecution of Falun Gong. The persecution has been brutal and relentless, with countless practitioners imprisoned and thousands of verified deaths – with the actual number of deaths likely much higher.

Every year around this date, Falun Gong practitioners around the world hold marches and rallies to commemorate those who lost their lives in the persecution and to call for help to stop this human rights crime.

Practitioners from the Bay Area held a two-mile-long march on July 15 through San Francisco. They started at the Ferry Building, passed by several popular tourist spots including Fisherman's Wharf, and ended at Maritime Square. 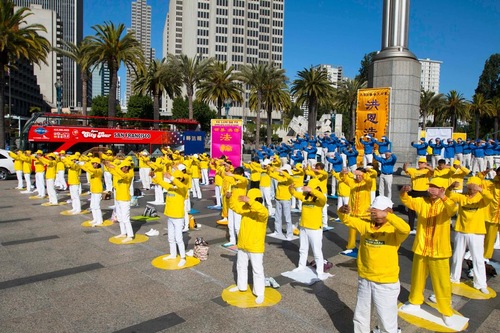 Doing the exercises together before the march. 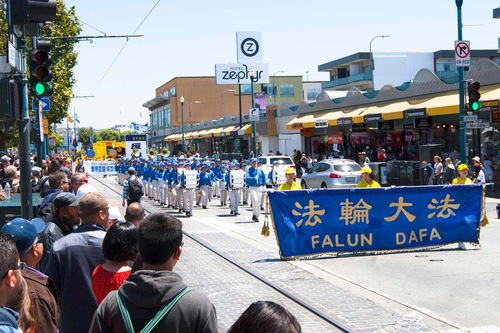 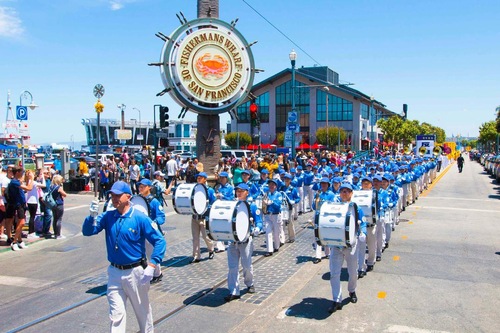 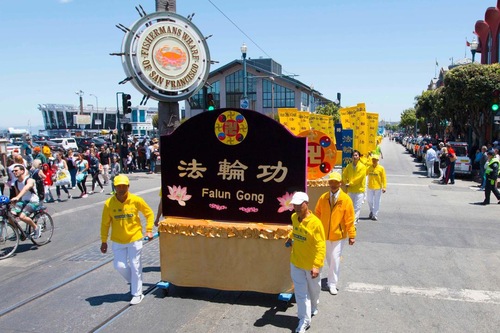 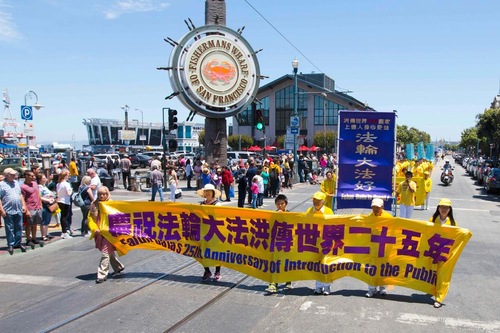 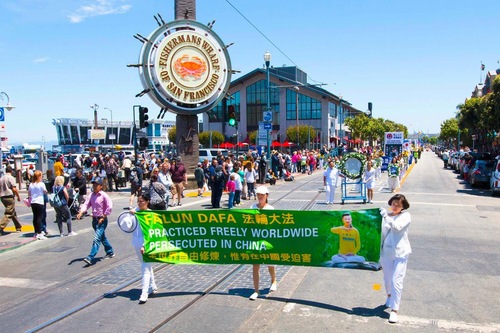 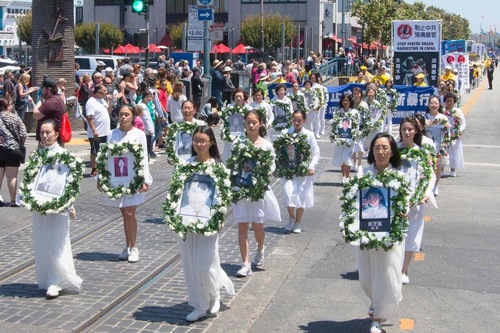 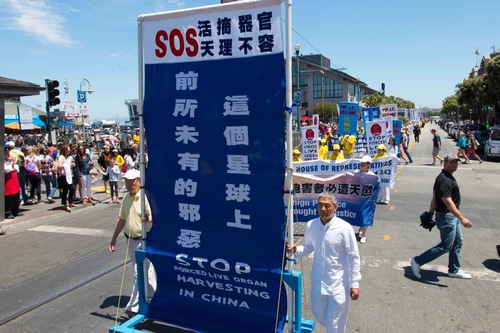 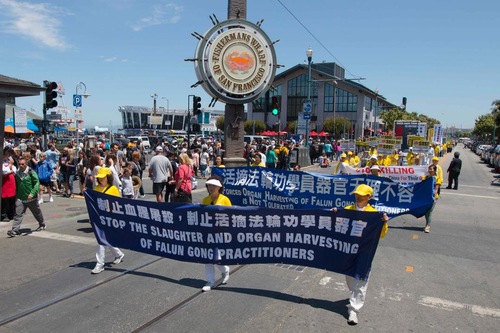 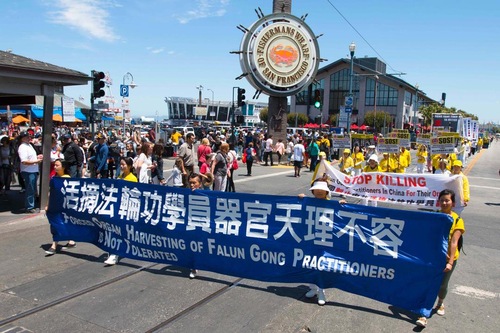 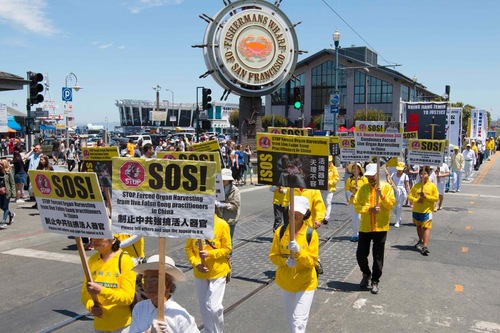 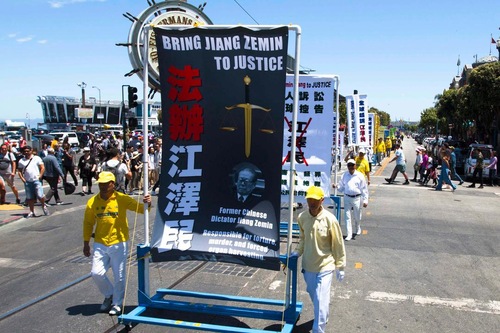 Falun Gong practitioners call for an end to the persecution and for the major perpetrators to be brought to justice.

The procession was made up of four major sections.

The first section introduced Falun Dafa and was titled “Falun Dafa is good.” It featured the Tian Guo Marching Band, banners, and practitioners demonstrating the exercises.

In the second section, “Stop the Persecution,” practitioners held portraits of those who lost their lives in the persecution and banners calling for an end to the crimes against Falun Dafa taking place in China.

The third section highlighted the 200,000 lawsuits that have been filed against former communist head Jiang Zemin, who started and directed the 18-year persecution.

The fourth section raised awareness of the 278 million Chinese who have quit the Chinese Communist Party (CCP), and cautioned the public to recognize that the Party is corrupt.

Ms. Tang Lijuan in the second section carried a portrait of a practitioner who lost his life in the persecution. She takes part in the march every year. Ms. Tang lost her son in the persecution, and she herself was imprisoned because of her belief in Falun Gong.

“I hope that everybody will know about the persecution and can discern good from evil. I also hope that my fellow Chinese will see how evil the CCP is and quit the Party,” Ms. Tang said.

Mr. Yao Yuanying said that his parents are still jailed in China. They were arrested while they were reading Zhuan Falun (the main book of Falun Gong) with other practitioners at home.

Mr. Yao said, “I hope that all Chinese government officials who have been involved in the persecution will stop taking part as soon as possible. I hope that they know that evil incurs karmic retribution. One day they will have to pay for what they have done.”

Support from All Walks of Life

Practitioners also handed out informational materials and collected signatures on a petition calling for an end to the persecution. 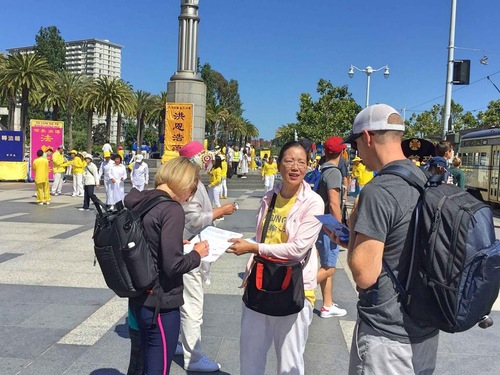 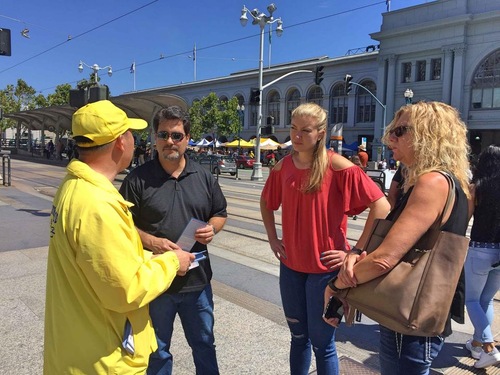 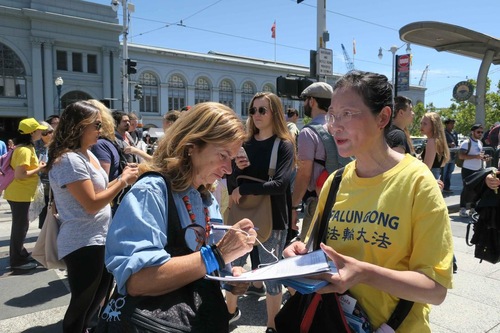 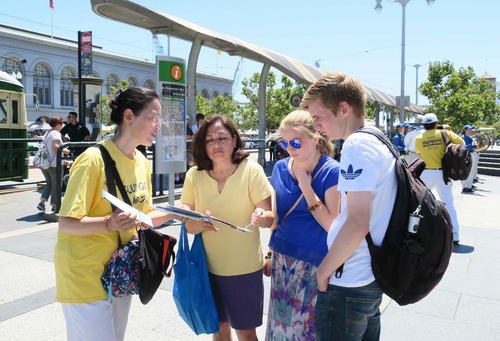 Many passersby were stunned by the details of the persecution, especially the state-sanctioned forced organ harvesting from Falun Gong practitioners and other prisoners of conscience. Several of them told practitioners that they would put this information on their social media pages so that their friends would know about it and also have an opportunity to sign the online petition.

Caio, a physician from Brazil, signed the petition. He could not believe that such a crime could be happening today. “Suppressing people because of their belief and forcibly harvesting their organs... this is pure evil,” he said. “I have seen that Falun Gong is peaceful. The Chinese government should not ban it.”

Stephanie and her friend Cindy were interested in learning the practice, and they thanked the practitioners for providing information about it. “I hope that more people will find out about Falun Gong, and help stop the persecution,” Stephanie said. 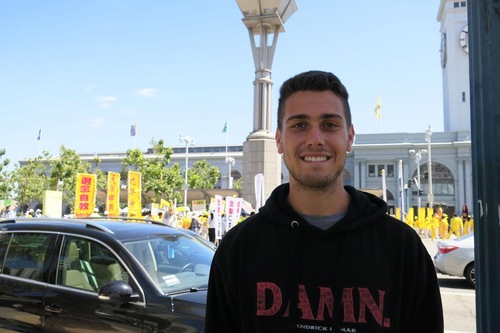 Kian Kazemi from Los Angeles said that everyone should stand up and help stop the persecution.

Kian Kazemi from Los Angeles, a college student majoring in filmmaking, was attracted to the peaceful exercises. He came over and talked to practitioners and was shocked by what he learned.

“Falun Gong has been peacefully resisting for 18 years,” he said, “but I didn't know about it until today. This makes me very sad. The persecution is a shame to humanity.

“As I stand here, I sense the compassion and peacefulness. I believe that Falun Gong makes the world more beautiful. Yet this group is persecuted in China. It is totally wrong. I think that all the media around the world should report on this. I support you.”

“Seven in Inner Mongolia Incarcerated, to Be Tried for Their Belief”

“From Unhappy and Overbearing to Kind, Sincere, and Happy”