(Minghui.org) Mr. Yang Guanren, a regional president of a group of companies headquartered in Beijing, was reported to police by a taxi driver, for talking about Falun Gong while on a business trip to Shenzhen on May 15, 2017. 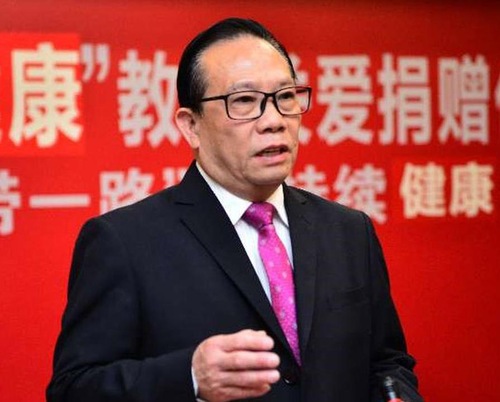 Reported for Talking about Falun Gong

Mr. Yang Guanren took a Didi taxi from Guangzhou City to Shenzhen during his business trip on May 15, 2017. On the way to Shenzhen, Mr. Yang told the driver about Falun Gong and the ongoing persecution of the practice.

The taxi driver then drove Mr. Yang to the Yuehai Police Station in Nanshan District, and he told the police that Mr. Yang was a Falun Gong practitioner. The police officers refused to arrest him, but the taxi driver insisted. The police relented under pressure.

Mr. Yang's family was notified by the Yuehai Police Station on May 16 about his arrest, and was told to collect his belongings at the police station. Officer Zhang told the family that they could pick up Mr. Yang 30 days after paying the bail.

They went to the Nanshan District Detention Center the morning of June 14—30 days after Mr. Yang's arrest—to pick him up. The detention center did not allow a visit with Mr. Yang. They also did not provide information about the case since the family did not bring their residency registration.

They then went to the Yuehai Police Station for further information, but were told that Zhang, who was in charge of the case, was on a business trip. The family called officer Zhang but were given no information.

They were soon notified to come to the Yuehai Police Station on the morning of June 17, and bring their identification cards. Zhang was still on his business trip when they arrived, but the family received a text message from Zhang saying that Mr. Yang would be released that day. The family waited for hours before finally being informed that Mr. Yang's arrest was approved.

They were next told to see captain Shi of the Domestic Security Division in the Nanshan District Police Department. Before going there, however, they were also asked to sign the arrest warrant, to which they refused.

Captain Shi of the Nanshan Police Department also refused to see them. Instead, he instructed the police to record the family. The police later accused the family of interrupting their business and called a police vehicle. The police arrested two family members and detained them at the Yuehai Police Station. Zhang called the family and threatened that they too would be arrested if they went to the police department again.

After the family hired an attorney, the attorney visited Mr. Yang at the detention center on June 19, and went to the police station. Zhang threatened he would torture Mr. Yang if the family and friends continued to call him.

In the end, the attorney was unsuccessful in gaining Mr. Yang’s release. Officers at the Nanshan Police Department demanded that Mr. Yang sign the arrest approval, without telling him that the approval was no longer valid. Mr. Yang refused to sign. The police also demanded that Mr. Yang's brother and his assistant sign the document, but both refused.

The Nanshan Police Department ordered the Domestic Security police in Mr. Yang's hometown to ransack the home of his parents, who are both over 80. His parents could not sleep at night, grieving for their son. His mother, 87, was so upset by her son's arrest that she was bedridden and unable to eat properly for many days.