(Minghui.org) Today's news from China includes incidents of persecution that took place in 6 cities or counties in 4 provinces. According to this report, 1 Falun Gong practitioner was subjected to mistreatment during their detention, and at least 14 were illegally arrested. 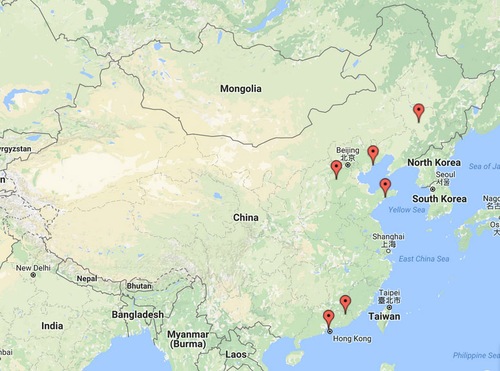 Officers from the Shanghewan Police Station in the Jiutai District broke into Ms. Yin Yanfeng's home in Shiyang Village and arrested her on the morning of June 9, 2017. She was held in the Jiutai Detention Center for ten days.

Liu Hongyan, from the Shanghewan Police Station, broke into Ms. Hao Wanling's home and arrested her on the morning of June 7, 2017. She was taken to the police station and released on the same day.

Liu Hongyan also broke into Mr. Liu Wei's home and arrested him on the evening of June 7, 2017.

Ms. Sun Mingxia was arrested by officers from the Fangyuan Police Station on May 10, 2017 for talking to people about Falun Gong. Her rental home was ransacked by police, who confiscated her printer and other personal belongings.

Mr. Xie Jinfang and his wife Ms. Dong Lian from Yanyang Town were arrested by officers from the Yanyang Town Police Station on June 8, 2017.

Ms. Dong was released after being interrogated. Mr. Xie's whereabouts are unknown.

Dingzhou City police took the three practitioners to Dingzhou Hospital, where they were forced to have blood and urine tests. They were taken to the Dingzhou Detention Center later that evening.

The officers confiscated nearly 60,000 yuan in cash, 5,000 DVDs, and other Falun Gong materials. They then ransacked Mr. Zuo's home. Mr. Zuo's son, in his 20s, was arrested and kept in custody until 3:00 a.m the following day.

Mr. Liu Changfu was arrested at his home on the afternoon of June 9, 2017. Officers confiscated DVDs containing information about Falun Gong.

Officer Fu Yong and three others broke into Mr. Yang Xiaoyong's home on May 10, 2017 and confiscated his Falun Gong book.

Mr. Zuo, Mr. Yang, and Mr. Liu are being held in the Qinhuangdao City Detention Center.