Australians: Stop the Persecution, Never Give Up!

(Minghui.org) Falun Gong practitioners from Queensland, Australia, held truth clarification activities at King George Square in Brisbane on June 23, 2017. They collected signatures on a petition calling for ending the Chinese Communist Party's (CCP) state-sanctioned organ harvesting from living Falun Gong practitioners. A candlelight vigil was held in the evening to mourn the practitioners who have died from the CCP's persecution.

The activities received great support from the public. Many people signed the petition, condemned the CCP's human rights violations, and expressed their support for Falun Gong practitioners' work to stop the persecution. Chinese people had an opportunity to quit the communist organizations they had joined in China. 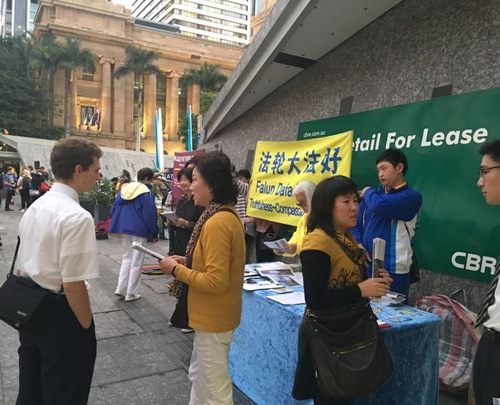 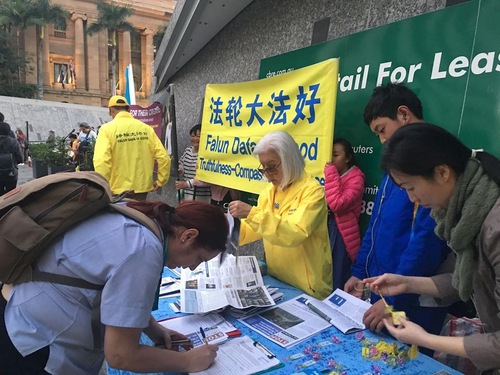 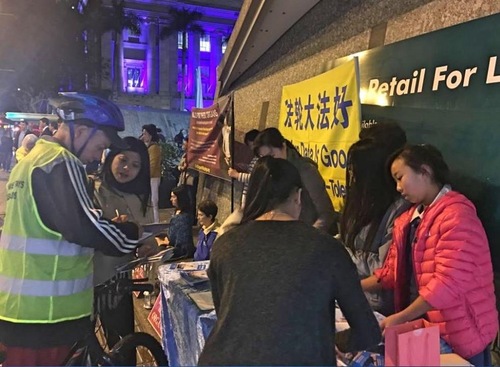 Lucas Fielding, a local resident, said the CCP's conduct of harvesting organs for profit was unprecedented and evil, and everyone of conscience should step out to say “no.” He completely agreed with the Falun Gong principles of Truthfulness, Compassion, and Forbearance, and expressed great sympathy for those being persecuted. He also wanted to help spread the word on his Facebook page, so that more people could learn about the persecution.

Bayleigh Duck and Colin Coelho, from Macquarie, New South Wales, are volunteers who help handicapped children. They were shocked to hear about the atrocity of the CCP harvesting organs from living Falun Gong practitioners. They called it a terrible state crime, and said that the signature collection by Falun Gong practitioners was very important. After signing the petition, Bayleigh said to a practitioner, “More people should come to sign. The only way to pressure the Communist Party is to expose the crime.” They took some introductory materials with them and said they wanted to do more to help stop the persecution. 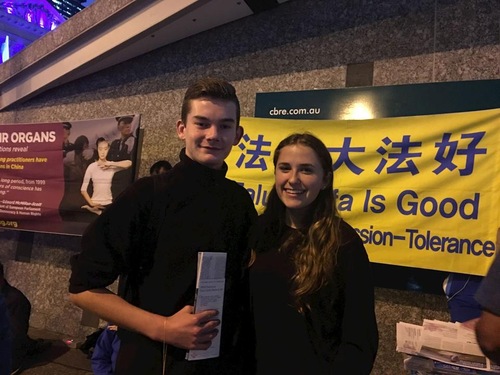 Wayu Braal and Abhi Rai work for the Red Cross. They were angered by the CCP's crime of organ harvesting. They immediately signed the petition, and asked what else they could do. They commented, “It's a disaster of humanity! It must stop!”

Aliitasi Marshall, a student of Social Work at Queensland University of Technology, signed the petition, and said that the persecution, especially the organ harvesting, was the worst among all social unfairness, and would be unthinkable in Western society. 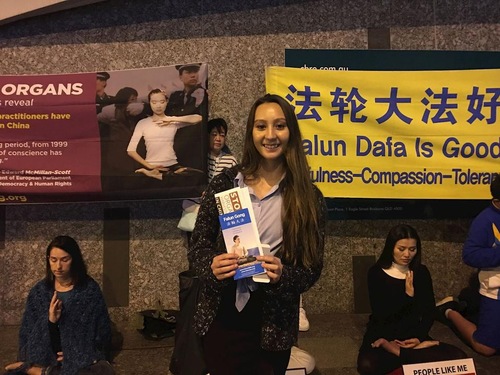 Aliitasi Marshall encourages Falun Gong practitioners to never give up!

Aliitasi was happy to hear about Resolution 343, passed by the U.S. Congress, and said that the Australian Parliament should pass a similar resolution. She told Falun Gong practitioners, “Stop the persecution! Never give up!”

Many Chinese took this opportunity to learn the facts about Falun Gong. A young preacher from Shandong Province, China, didn't understand the significance of quitting the communist organizations. A practitioner explained it to him using the example of the devastating plague after the Roman empire's persecution of Christianity. The practitioner said that Falun Gong was a cultivation system of the Buddha School based on the principles of Truthfulness, Compassion, and Forbearance, but the CCP chose to persecute innocent Falun Gong practitioners, and that the persecution would bring the CCP to its demise. The vows of joining the communist organizations had tied people's lives to the CCP's fate, and quitting these organizations is choosing not to being buried with the CCP.

The young man was happy to learn the significance. He not only quit for himself, but also for his family in China.

A couple of young Chinese also talked to a Falun Gong practitioner for a long while, and learned many details about the persecution. They took a copy of the book “Nine Commentaries on the Communist Party” and a DVD. They happily agreed to quit the communist organizations they had joined before, and were very thankful. 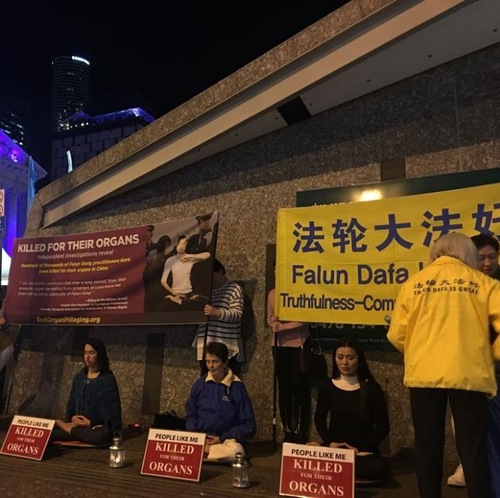 Candlelight vigil mourns Falun Gong practitioners who have died from the CCP's persecution.

“New York: “You Are a Courageous Group of People””