(Minghui.org) A Falun Dafa experience sharing conference was held in the seaside town of Władysławowo on June 15. Thirteen practitioners shared their cultivation experiences on stage. Reflecting the multicultural nature of the local group, simultaneous translation was offered in Polish, English, Chinese and Vietnamese.

Władysławowo is a well-known seaside town on the Baltic Sea in northern Poland. Warsaw lies some 470 kilometers (almost 300 miles) to the south. 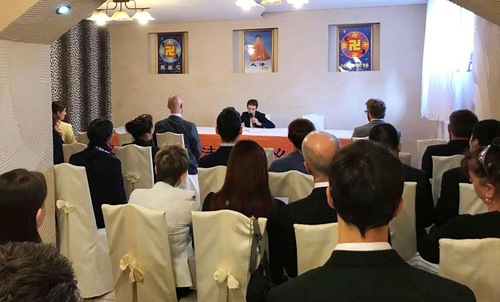 Venue for the Falun Dafa experience sharing conference in the northern seaside town of Wladyslawowo, Poland

A practitioner named Konieczny was among those who shared their experiences on stage. He started practicing Falun Dafa in 2010 and described how he used to be a fast-talking salesman. He tried to talk people into buying things, but found himself unable to meet sales targets.

After he began practicing Falun Dafa and following the principles of Truthfulness-Compassion-Forbearance, he realized that his approach to sales didn’t put the needs of others first. He corrected his strategy and, as a result, his sales increased dramatically and he was able to get himself out of debt.

Konieczny experienced other benefits from his practice as well. His health improved and he worked hard to improve himself. With such a great practice being brutally persecuted in China, he realized he needed to step forward and help. He couldn’t ignore the persecution and felt that he should help raise awareness about it.

He started to visit local politicians and make calls to Members of the European Parliament (MEP). He helped them understand what Falun Dafa is, how it is being persecuted in China, and told them about the state-sanctioned organ harvesting atrocities that victimizes countless Falun Dafa practitioners to enrich Chinese authorities. The MEP later issued a Written Declaration (2016/WD48) condemning the persecution and organ harvesting atrocities.

Practitioner Monika started practicing Falun Dafa two years ago. She was looking for meaning in her life before she encountered Falun Dafa. After much searching she finally found Falun Dafa. She found many of the answers she was looking for when she read the book Zhuan Falun, the main text of Falun Dafa, and decided to take up the practice immediately.

Monika was a scientist and liked to have logical thinking and scientific verification. However, in practicing Falun Dafa, she found the answers to many questions that science hadn’t answered for her. She now feels that empirical science is sometimes too narrow and stymied by its limitations. She believes that many people are waiting to find out about Falun Dafa like she did. She has become more open-minded and spiritual, and more and more determined in her practice of Dafa.

Practitioner Quách from Vietnam started practicing Falun Dafa seven months ago. Before practicing Dafa, he had gallstones and cholecystitis. Before surgery, doctors did more tests only to discover that he also had a kidney stone, leukemia, hemophilia and hepatitis. He was weak, had insomnia, frequent urine, poor digestion and bad mood. His temper became hot and occasionally out of control. He would then beat his wife and children.

To find a way to treat his many illnesses, Quách searched the internet and came across a report of a person with similar illnesses as him. This person recovered from all his illnesses after practicing Falun Dafa. Quách quickly visited the Falun Dafa website and contacted a local practitioner living nearby. Quách felt warm currents of energy throughout his whole body when he participated in the group practice in Warsaw for the first time. He had similar feeling every few other days. He enlightened that Master was cleansing his body.

Quách's health has improved significantly in the seven months since he took up the practice. All of his symptoms have disappeared. His mood has improved. He feels that he has become a better person. His bad mood and hot temper are gone. His daughter told him that, “Since you practiced Falun Dafa, you have become a good daddy. You were not like this before.”