(Minghui.org) May 13 marks the 18th World Falun Dafa Day and the 25th anniversary of the public introduction of this ancient mind/body practice.

Canadian government leaders at the national, provincial, and city levels sent letters to local Falun Dafa Association for the occasion, recognizing the group's contribution to their communities, and praising Falun Dafa's guiding principles of Truthfulness, Compassion, and Forbearance. 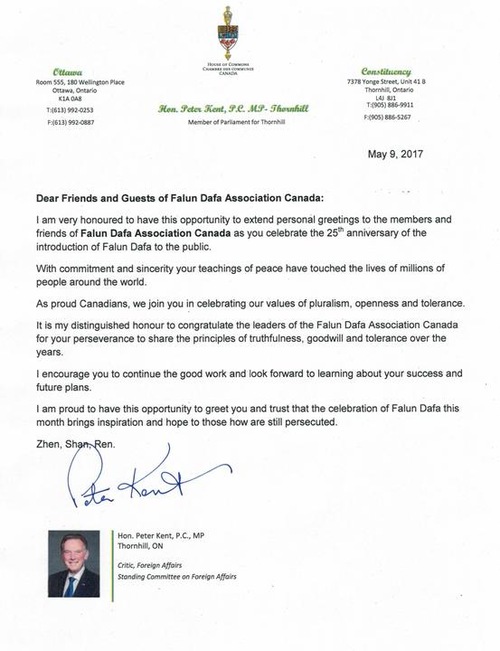 MP Peter Kent, chair of the Parliamentary Friends of Falun Gong, wrote: “It is my distinguished honor to congratulate the leaders of the Falun Dafa Association Canada for your perseverance to share the principles of truthfulness, goodwill, and tolerance over the years. I encourage you to continue the good work and look forward to learning about your success and future plans.” 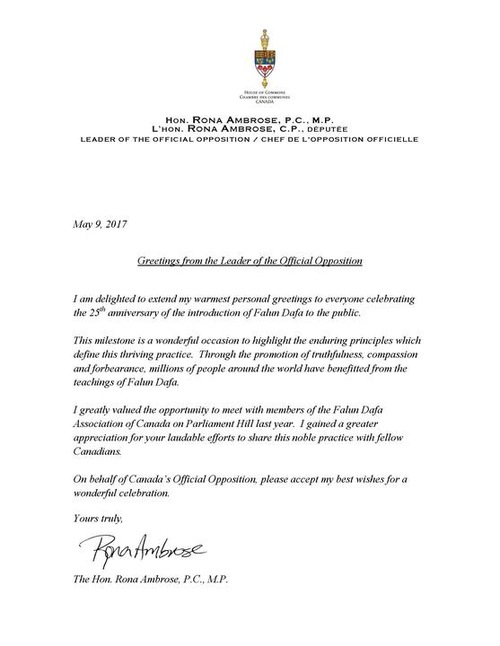 MP Rona Ambrose, the interim leader of the Conservative Party and the Official Opposition, called the 25th anniversary of the introduction of Falun Dafa to the public a milestone. She wrote: “This milestone is a wonderful occasion to highlight the enduring principles which define this thriving practice. Through the promotion of truthfulness, compassion and forbearance, millions of people around the world have benefited from the teaching of Falun Dafa.”

MP Ambrose also wrote: “I greatly valued the opportunity to meet with members of the Falun Dafa Association of Canada on Parliament Hill last year. I gained a greater appreciation for your laudable efforts to share this noble practice with fellow Canadians.” 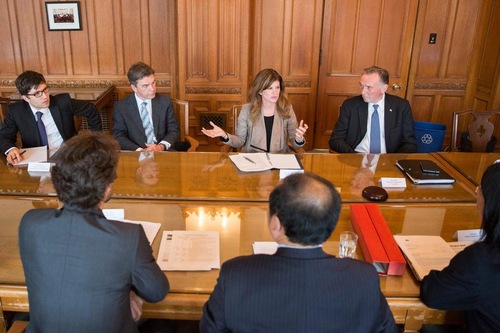 MP Ambrose posted the picture of her meeting with Falun Gong practitioners on June 8, 2016 on her social media account. With her were MP Peter Kent (right 1), MP David Anderson (left 2), and MP Garnett Genuis (left 1). 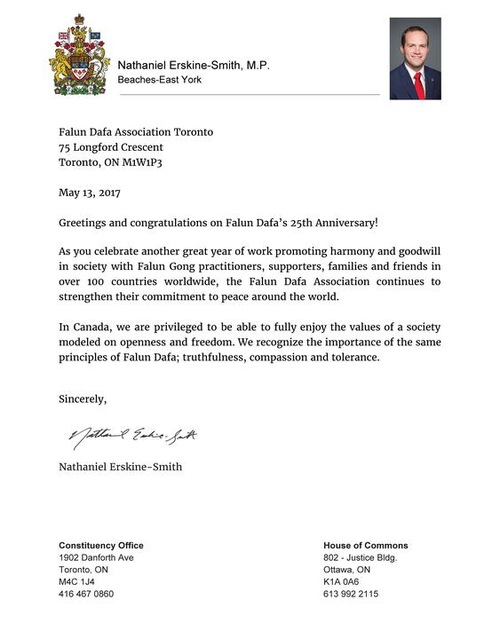 MP Mathaniel Erskine-Smith wrote: “In Canada, we are privileged to be able to fully enjoy the values of a society modeled on openness and freedom, we recognize the importance of the same principles of Falun Dafa; truthfulness, compassion, and tolerance.” 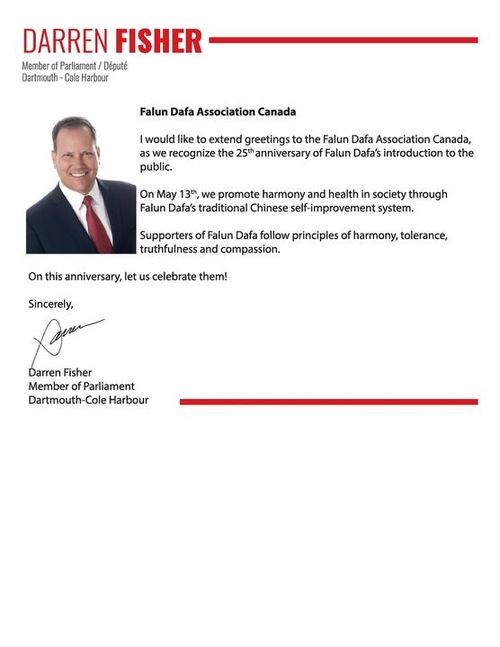 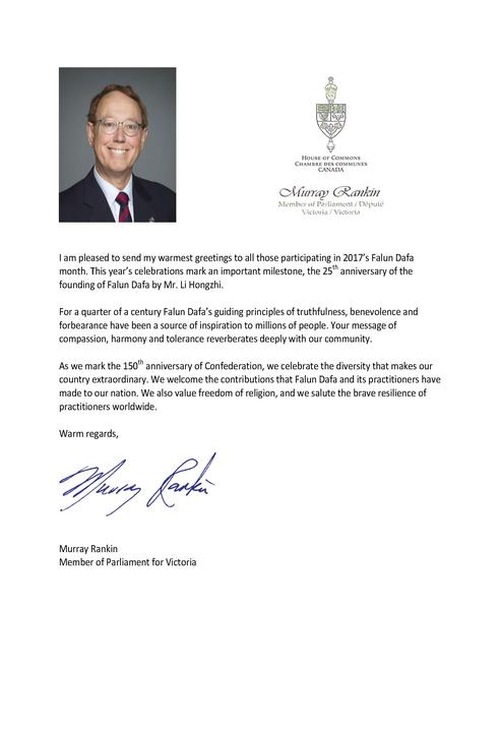 MP Murray Rankin wrote: “For a quarter of a century Falun Dafa's guiding principles of truthfulness, benevolence, forbearance have been a source of inspiration to millions of people. Your message of compassion, harmony, and tolerance reverberates deeply with our community.” 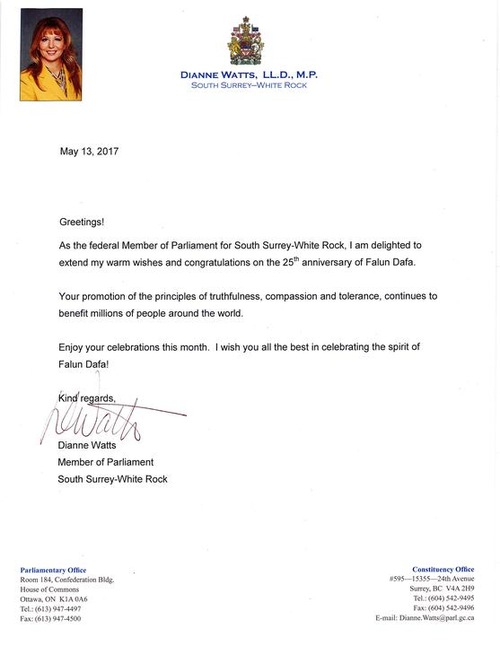 MP Dianne Watts wrote: “Your promotion of the principles of truthfulness, compassion, and tolerance, continues to benefit millions of people around the world.” 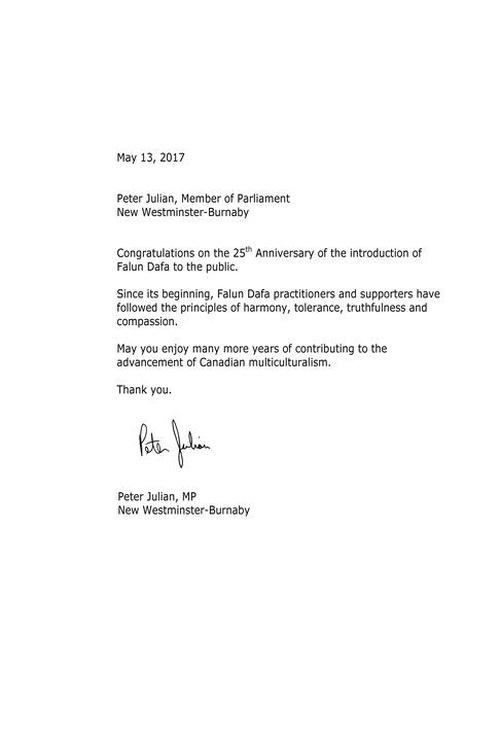 MP Peter Julian wrote: “May you enjoy many more years of contributing to the advancement of Canadian multiculturalism.” 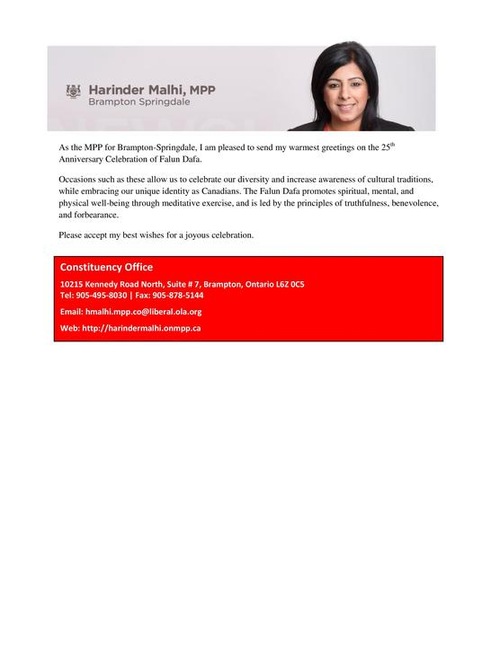 The MPP for Brampton-Springdale, Harinder Malhi wrote: “Falun Dafa promotes spiritual, mental, and physical well-being through meditative exercise, and is led by the principles of truthfulness, benevolence, and forbearance.” 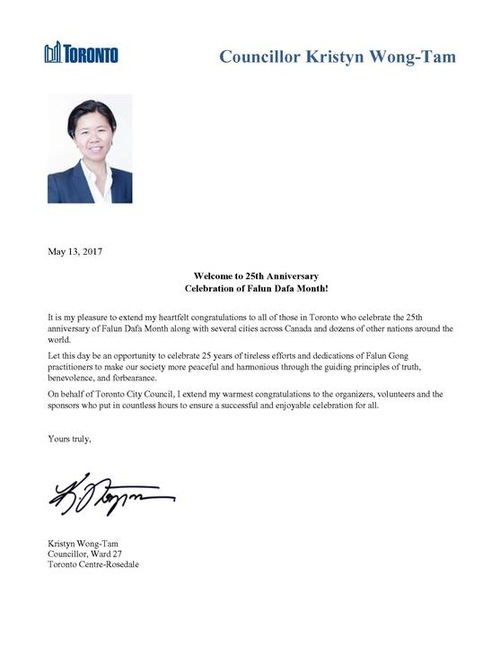 City council member of Toronto Kristyn Wong-Tam wrote: “On behalf of Toronto City Council, I extend my warmest congratulations to the organizers, volunteers, and sponsors who put in countless hours to ensure a successful and enjoyable celebration for all.” 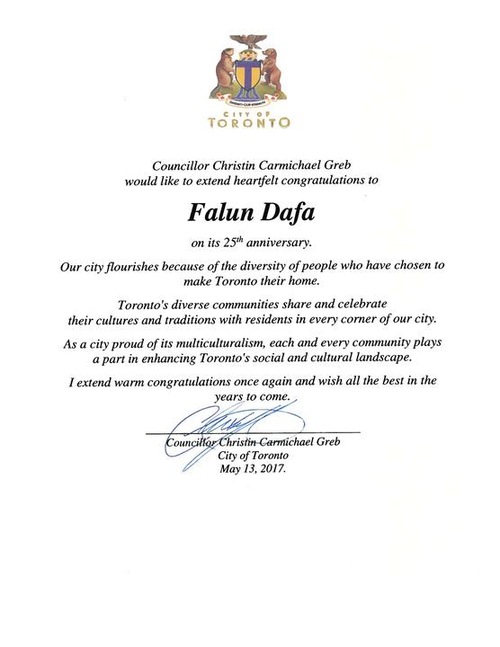 City council member of Toronto, Christin Carmichael-Greb, wrote: “As a city proud of its multiculturalism, each and every community plays a part in enhancing Toronto's social and cultural landscape.” 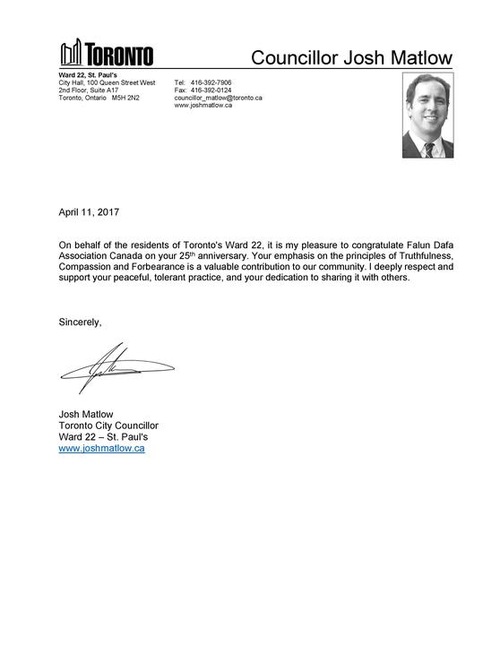 City council member of Toronto Josh Matlow wrote: “Your emphasis on the principles of Truthfulness, Compassion, and Forbearance is a valuable contribution to our community.” 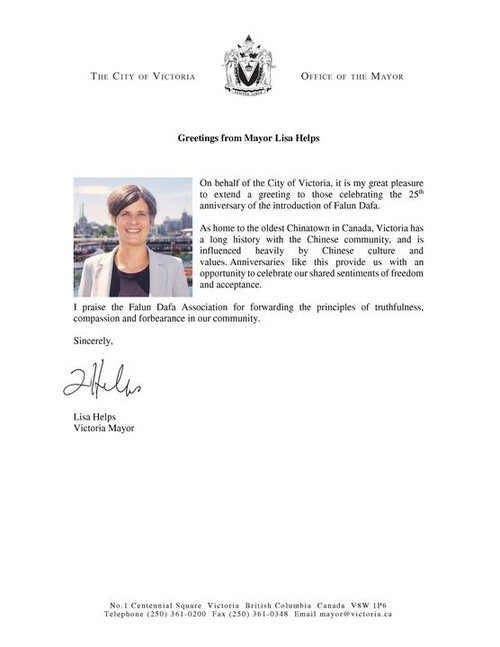 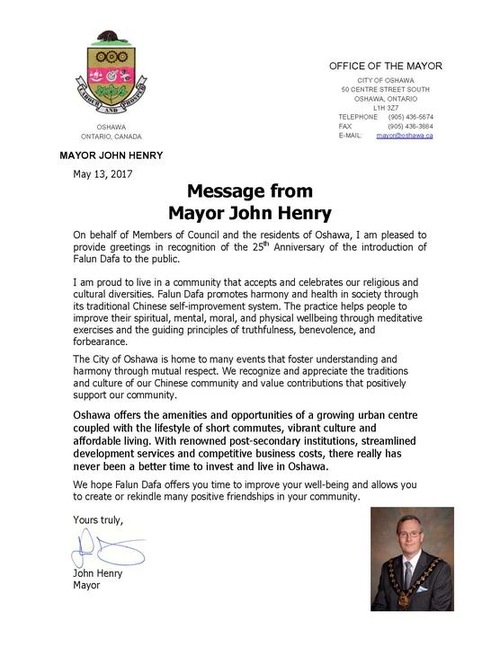 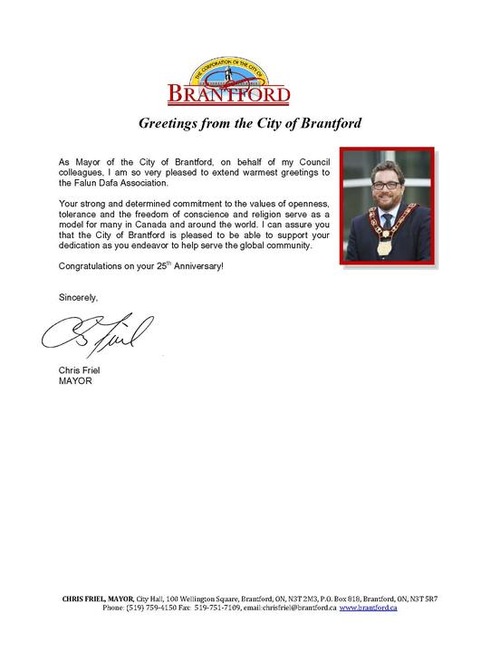 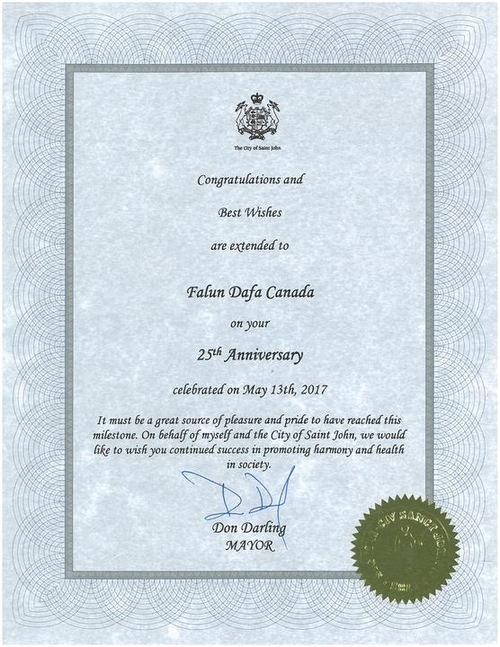 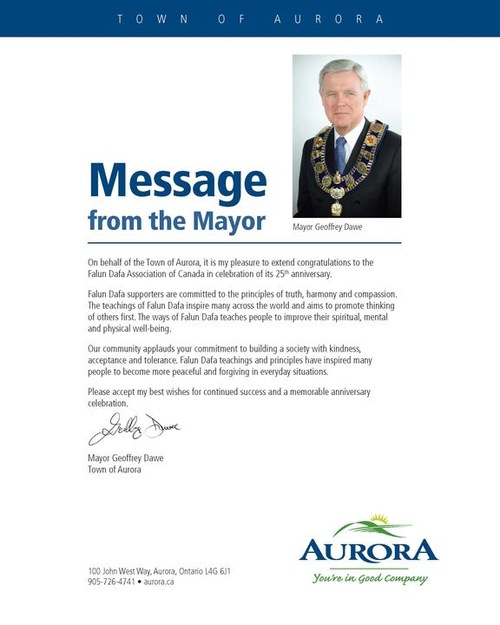 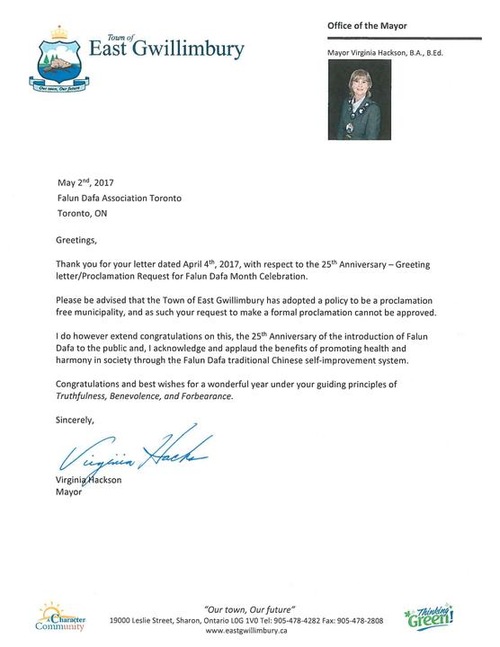 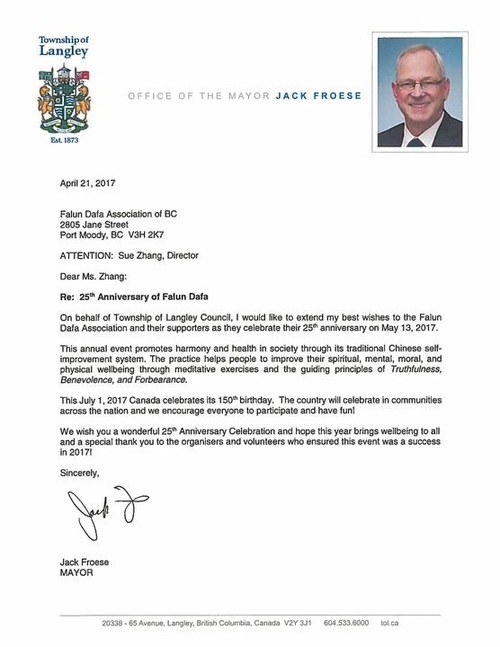 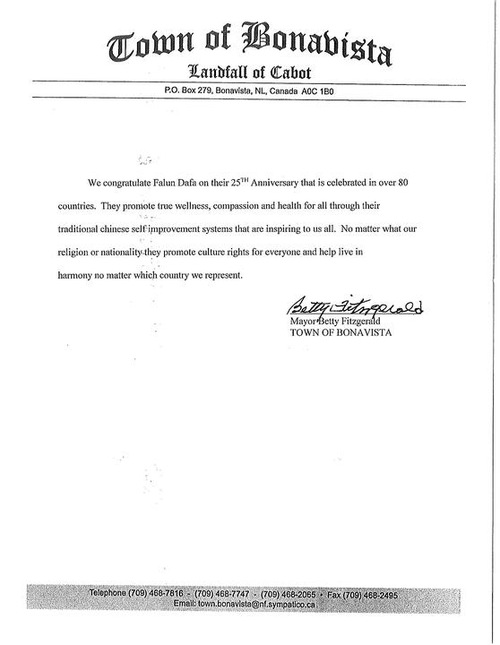 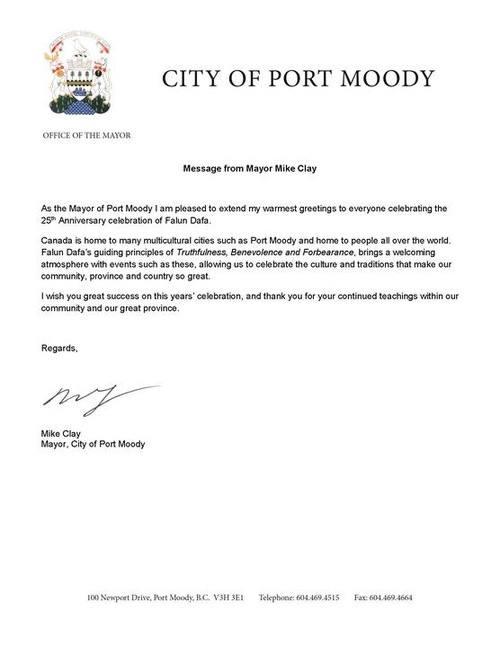 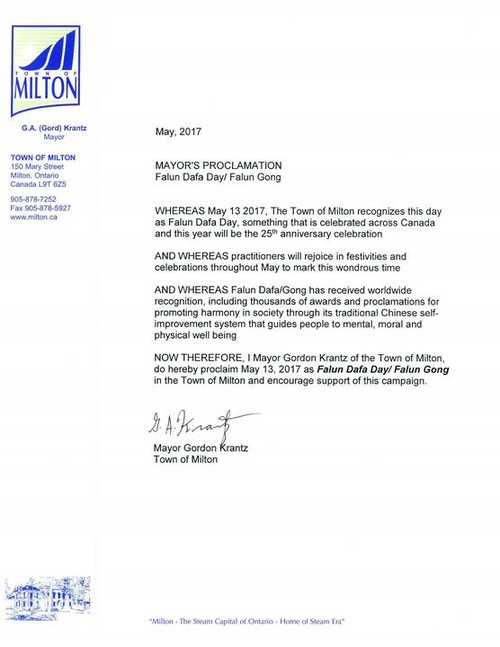 The Town of Milton proclaims May 13th 2017 to be Falun Dafa Day. 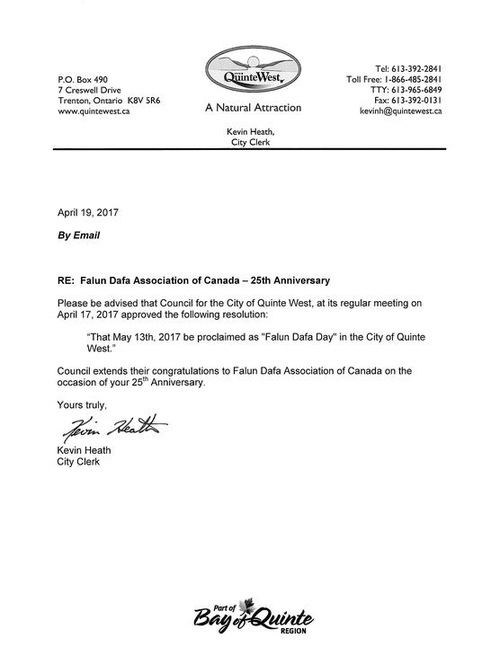 The City of Quinte West proclaims May 13th 2017 to be Falun Dafa Day. 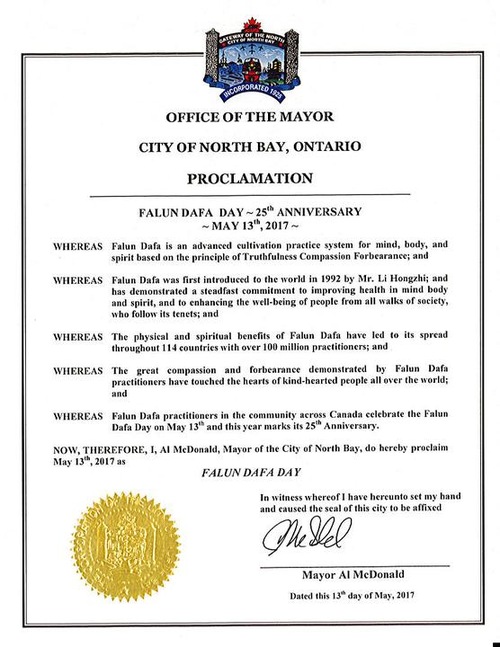 The City of North Bay proclaims May 13th 2017 to be Falun Dafa Day. 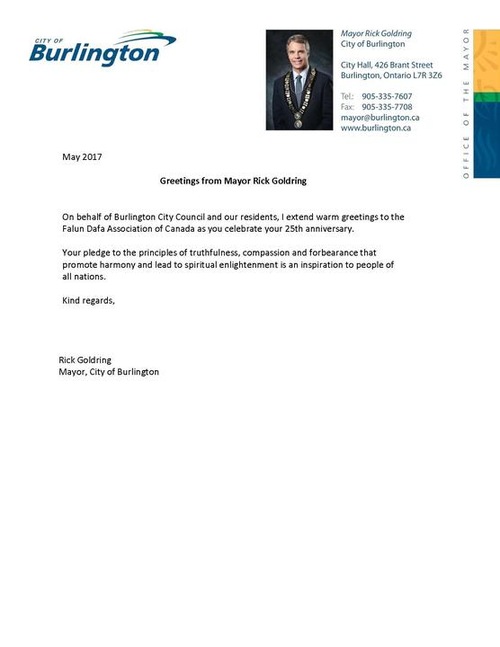 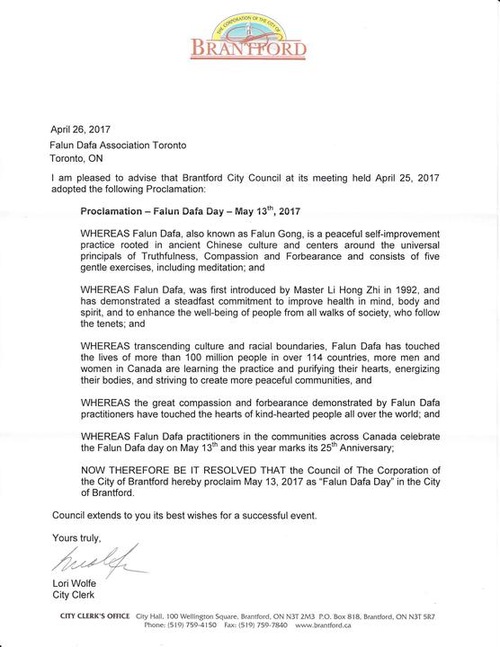 The City of Brantford proclaims May 13th 2017 to be Falun Dafa Day. 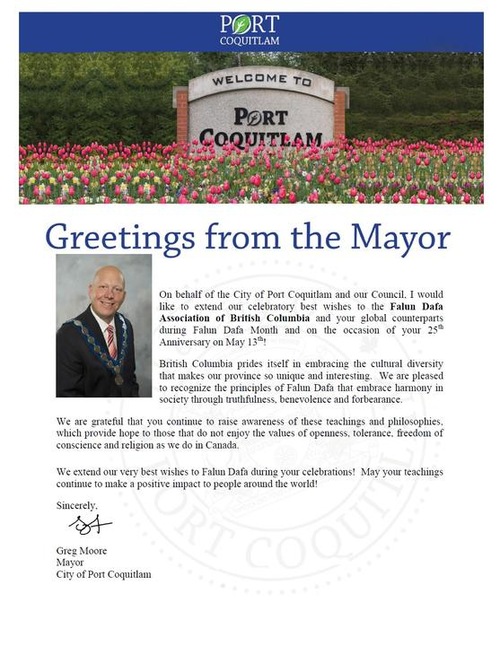