(Minghui.org) Falun Gong practitioners held a rally in downtown Macau on May 6 to demand that the Chinese Communist Party (CCP) stop the persecution of Falun Gong and to protest the visit of Zhang Dejiang, one of the seven CCP Politburo Standing Committee members.

Zhang is actively involved in the persecution of Falun Gong, following the orders of Jiang Zemin, the former head of the CCP who initiated the suppression. Zhang will be visiting Macau May 8 to 10. 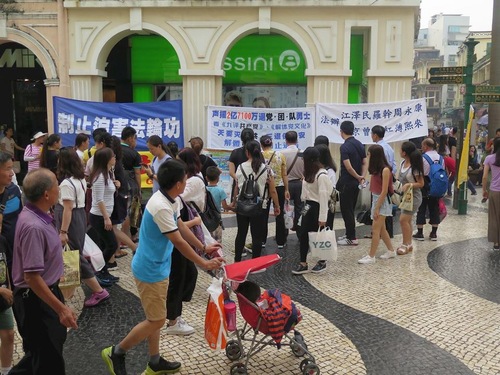 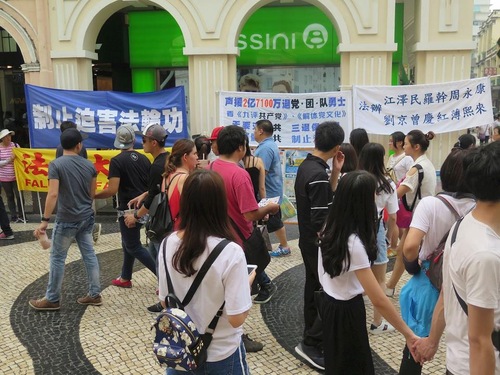 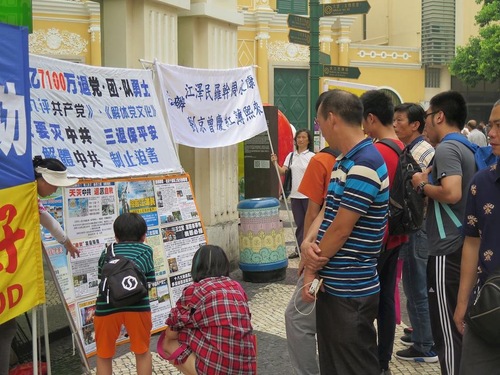 Passersby study the banners and posters at the Falun Gong rally protesting Zhang's visit to Macau.

Zhang followed Jiang’s lead and actively persecuted Falun Gong. The World Organization to Investigate the Persecution of Falun Gong (WOIPFG) has documented that 33 practitioners were tortured to death in Guangdong Province when Zhang was the secretary of the provincial CCP committee from November 2002 to December 2007.

Based on an official record, Sanshui Yearbook 2004, 1099 Falun Gong practitioners were incarcerated in Guangdong Women's Forced Labor Camp in 2004, but there were only 153 practitioners in that same camp in 2003. Zhang has been indicted in many countries for his crimes in carrying out the persecution.

The rally in downtown Macau drew the attention of many locals and tourists, who read the Falun Gong banners and posters. A former police officer who retired years ago greeted the practitioners. He knew many of them from rallies and other awareness-raising events.