Torture That Pushed Me to the Verge of Death Multiple Times

(Minghui.org) I am Sun Shuying, 64, an ordinary woman who worked at an automobile factory in Northeast China. Due to my belief in Falun Dafa, the authorities arrested me seven times and imprisoned me for ten years. Their beatings and severe torture nearly killed me several times.

I used to have many health issues, including central nerve compression that once caused me to be unable to move or talk for several minutes. After I practiced Falun Dafa in 1998, I completely recovered in 18 days. I am thankful to Dafa for saving my life.

Punished for Appealing for Justice

In 1999, Jiang Zemin, the head of the Communist Party, launched a campaign against Falun Dafa.

I decided to testify for Falun Dafa's innocence with my own experiences.

I went to the Changchun Municipal Government first. I was arrested, beaten at a police station, and then detained for 18 days.

I then decided to go to Beijing to appeal for Falun Dafa. The first time, I was stopped at the Changchun Train Station. I was arrested and detained for 15 days. I was blocked and arrested again at Changchun the second time, as well. I held a hunger strike for 18 days before being released.

In November 1999, I managed to get to Beijing on my third try. I held up a banner reading “Falun Dafa is good” at Tiananmen Square. A police officer kicked me so hard that I fell and landed several feet away.

The Changchun Police Department offered a 30,000 yuan (US $4,300) reward if anyone could report my whereabouts. I had no choice but to go into hiding. I went to Inner Mongolia.

Forced Labor Camp: Tortured to the Brink of Death

I was arrested on June 21, 2001, when distributing materials telling people about Falun Dafa and the Communist Party's persecution. The police confiscated the 7,000 yuan that I had on me.

At the police station in Inner Mongolia, I was not allowed to sit down. The police slapped me in the face, punched me in the head and eyes, and grabbed my hair to smash my face into a wall repeatedly. They didn't allow me to sleep for eight days straight. At the end of the eighth day, I was extremely weak and could barely open my eyes.

A police officer jumped in the air and kicked me in the chest. Gasping for air and laying on the ground, I could not feel my limbs after his kick. It took quite a while for me to be able to focus.

Seeing that I was in critical condition, the police chief stopped the beating.

I was taken back to Changchun later. Police detained me in a secret place and beat me relentlessly, day and night. Then they applied a more brutal torture. They tied my hands at the back and forced me to bend down while keeping my legs straight. Then they pushed my hands up straight, calling it “flying an airplane.”

Very quickly, I sweated profusely and couldn't speak, feeling like I was dying. Seeing that things were not right, a policewoman called for the torture to stop. 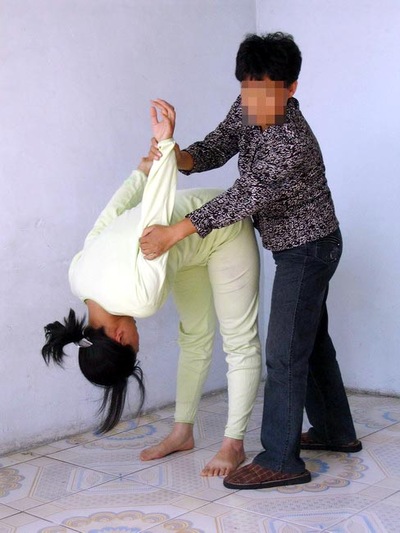 I was taken to Tiebei Detention Center and locked in an iron cage. I shouted “Falun Dafa is good!” to many police officials who came to visit this detention center. The warden ordered retaliation.

Guards put a 70-pound iron block on me, locked my feet in iron shoes, hung an iron chain around my neck, and tied my hands at the back with another iron chain. I couldn't move at all. People had to feed me.

The authorities decided to put me in a forced labor camp for two years. I was imprisoned at the Heizuizi Forced Labor Camp in Changchun.

I held a hunger strike to protest the torture. Guards gathered eight criminal inmates to force-feed me. They pushed me onto a bench while an inmate (who weighed over 200 pounds) sat on my stomach. They inserted a tube in my nose, but were unable to feed me.

On Chinese New Year's Eve in 2012, I suddenly had a great pain in my stomach. I was taken to a hospital and was diagnosed with kidney stones and hydronephrosis (the swelling of a kidney due to a build-up of urine, which can cause kidney failure if not treated properly). I was given IV injections, but the pain didn't stop after ten hours. By then I was unconscious. A doctor opened my eyelids and said that I was dying. My sister was called in to take me home at 2:30 a.m.

I was able to eventually recover after practicing Falun Dafa at home.

I was continuously beaten for three days at the police station of the First Automobile Group, which was my workplace. My left calf was badly injured after police repeatedly kicked it. I was not allowed to go to the bathroom for those three days.

Eventually I suffered a heart attack, and the police rushed me to the hospital for treatment. Despite that, they later put me in Changchun Third Detention Center.

Again, I held a hunger strike to protest the torture. Guards force-fed me. My blood pressure dropped to zero after their force-feeding; they panicked and took me to the hospital.

The doctor didn't want to accept me since he was afraid that I might die right there. But the police forced the hospital to accept me.

Then, police doctors came. They gave me IV injection for 18 days. My body swelled up like a pig. I heard people talking about another person who, after the IV injection, became insane and could no longer handle the pain. This person ended up committing suicide.

I realized that the IV they gave me had poisonous substances as well, as I was rapidly gaining weight over the course of a few days. I took the needle out.

A police doctor came to check on me. He later told an inmate: “Being fat won't make her die. But she has a lot of red dots on her back. Those hives can get life threatening.”

Many inmates appealed to the guards to stop the IV injection for me, and the police doctors stopped it. My whole body was red and swelling, and it was extremely itchy.

The Luuyuan District Court held its first hearing of my case on December 29, 2005. I shouted “Falun Dafa is good” as I was being taken to the court. Several police officers then sealed my mouth with tape.

The second hearing was on June 2, 2005. On that day, my heart beat could not be detected and I was extremely pale. However, the authorities still decided to continue the hearing. They put me on an IV and took me to the court in an ambulance. I was carried into the courtroom.

When I was taken back to the detention center, I had no discernible heartbeat.

Prison: Paralyzed and Near Death

The court sentenced me to 10 years in prison. I was transferred to the Heizuizi Prison in Changchun on June 21, 2006.

The guards ordered the inmates to make me give up my belief. The inmates held me down on the ground and beat me. They eventually stopped after they got tired.

I was still extremely itchy. The prison guards ordered the inmates to apply salty water, hot pepper powder, and vinegar on my body, which was excruciatingly painful.

The inmates didn't allow me to relieve myself for five days. Then they forced me to stand straight for 49 days, with only one hour of sleep every day. At the end, I couldn't open my eyes, my brain stopped working, and I couldn't see things clearly.

My body was covered with blisters and infections by then. Even the prison doctor didn't know how to treat it. She warned me that I could die soon.

I said that I would be fine if they released me, but they refused.

One day I suddenly felt a great pain in my spine, as if I had been stabbed by a needle. I could not move anymore. After that, I became unable to care for myself. I had to rely on others to turn over in bed.

I held a firm belief in Falun Dafa and kept telling myself that I would be fine. I was still able to move my hand. I kept practicing using my hands. Gradually I was able to drag my body forward a bit. Later, the energy flow at my back released. I could move more.

The guards came to me, saying that they could release me on medical parole if I signed statements to give up Falun Dafa. I refused.

I was released from the prison in 2014, after eight-and-a-half years of imprisonment.

I rented a house in a village with another practitioner. I completely recovered after doing Falun Dafa exercises.

We were arrested on July 17, 2014. I was however diagnosed with cerebral infarction, cerebral failure, and cerebral palsy. The police released me.

However, the police kept coming to harass me, so I went into hiding again.

My multiple arrests brought a lot of grief to my mother. She always worried about me and couldn't sleep well. She passed away while I was in prison.

Shocked by our mother's death, my elder sister was depressed and got sick. She also passed away.

My husband, under the police's threat and intimation, requested a divorce. The police said if I ever asked for the house or money, they would send me to prison. The court's verdict gave everything to my husband.

After I came out of prison, my daughter-in-law didn't dare to have me live with their family, for fear of the police's harassment. My son rented places for me four times before I left to fend for myself.

“New Practitioner: My Own Shortcomings Are Mirrored in My Husband”

“Intercepting TV Signals in China: A Look Back at Falun Gong Practitioners’ Peaceful Resistance to the Persecution”