(Minghui.org) The City Council of Parramatta held a large Chinese New Year Celebration on Centenary Square in the suburb of Sydney, Australia on February 3, 2017. Sixteen groups performed on stage, with Falun Gong practitioners' lion dance team and waist drummers as the opening act.

Many in the audience stepped forward to take photos when the waist drummers and lion dancers in yellow costumes gathered on the square. In response, an organizer of the event suggested that the practitioners line up to let viewers take photos. The practitioners unfurled a large banner reading “Falun Gong teaches Truthfulness-Compassion-Forbearance.” 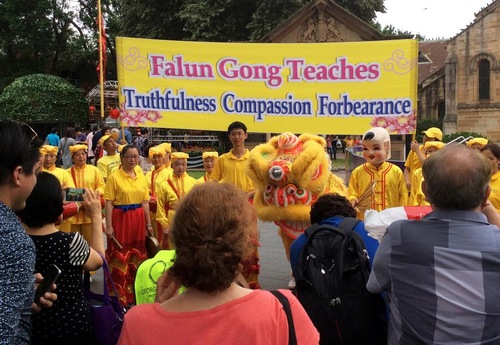 The lion dancers were the first to perform, followed by waist drummers who performed the musical pieces Jubilation and Falun Dafa Is Good to warm applause.

Larenta, one of the even staff, said excitedly, “You are welcomed a lot. People like your program. Many people asked when your performance would start. It's Chinese New Year, so people wait for traditional performances like the lion dance and waist drums.”

Terezkas Drnzik, a local resident, said she came late and regretted missing the first performance. She asked a reporter to send some photos to her. She said she liked traditional performance and knew about Falun Gong.

“My husband pays attention to Falun Gong. He often talked about Falun Gong with me at home. We come from the Czech Republic. We know the evil nature of the Communist Party,” Terezkas said.

Another spectator, Sam Lal, said that the practitioners' performance was the best he had seen among similar community events.