(Minghui.org) Falun Gong practitioners held a “Truthfulness-Compassion-Forbearance” Art Exhibition in the Pennsylvania State Capitol in Harrisburg from January 4 to 30.

As the state representatives initiated a resolution condemning the state-sanctioned organ harvesting in China, the art exhibition offered a chance for the lawmakers and staff members to learn about Falun Gong and the persecution of it from a different angle.

Often referred to as a “palace of art,” the capitol building is over a century old and was designated a National Historic Landmark in 2006. The art exhibition was held in the East Wing. 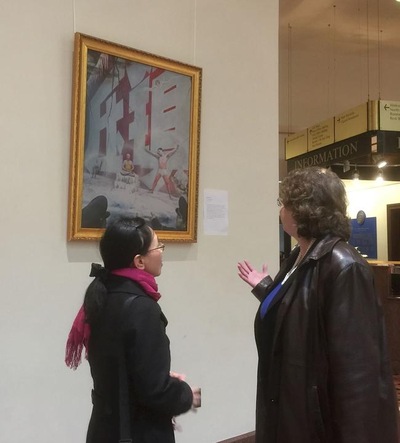 Visitors responded to the artwork.
Fifteen paintings by Falun Gong practitioners were exhibited. Five of them demonstrated the beauty of this ancient cultivation practice, and the other 10 exposed the brutality of the persecution.

Linda Schylaske, an  to State Representative Doyle Heffley, encouraged practitioners to talk to non-government organizations and call them for help to stop the persecution.

Rep. Heffley is one of the co-sponsors of the resolution that condemns the forced organ harvesting.

Ms. Schylaske said the examples of persecution depicted in the paintings were really horrible. She had discussions with the representative on this issue.

A capitol police officer said that he had read the explanation for every piece. “More people should come to see these,” he said. 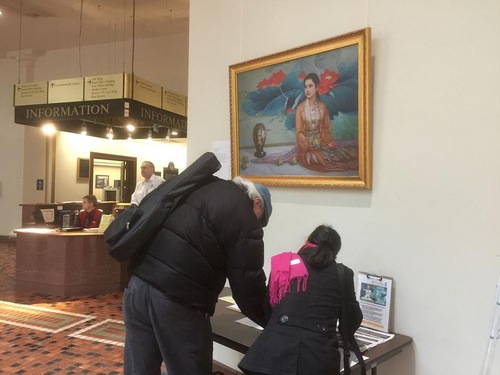 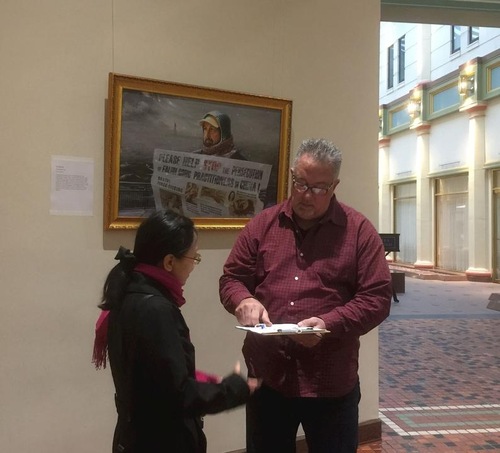 Chantal Mulenga, a visitor to the capitol, was very concerned about the persecution. She urged the practitioners to hold similar events in Philadelphia. “More people will see these if you hold the exhibition there,” she said. Ms. Mulenga was the first one to sign the practitioners' petition in support of their peaceful resistance.

Many visitors were stunned to learn about the persecution, and some compared it to the Holocaust. Several people encouraged the practitioners to talk to the lawmakers.

Steven, a staff member, could not understand why the Chinese Communist Party persecutes Falun Gong.

“They are just peacefully doing meditation. Why does the Chinese government suppress a group of good citizens?” he asked.

It was explained to him that the Communist Party cannot tolerate Falun Gong’s teaching of Truthfulness-Compassion-Forbearance, and that the Party always tries to control people's thoughts.

Steven then asked whether it helped to tell people in the U.S. about the persecution. Practitioners told him, “The international community has exerted pressure on the Chinese regime. Some jailed practitioners were bailed out. And, to a degree, the pressure has hindered the persecution.

“The Party is afraid that their evildoing will be exposed. The more people that know about it, the sooner the persecution will stop.”

Steven was touched. He agreed and gave suggestions on how to inform more people.

While viewers were disturbed by depictions of the persecution, many of them also saw in them the peacefulness and energy of Falun Gong.

One gentleman told practitioners that he could sense strong energy radiating from the paintings. He liked them, but he didn't know why. A practitioner suggested that perhaps it was because they were painted by Falun Gong cultivators who practice Truthfulness-Compassion-Forbearance, so the artworks were imbued with righteous energy.

April Ashe, a staff member at the capitol, found the paintings “very profound.” “The figures in the paintings are so real. You can tell the truth from their faces,” she said.

Martz, a staff member, had heard about Falun Gong and wanted to know more. Practitioners explained that this is an ancient cultivation practice that uplifts a person's body and mind. They also shared a few true stories of the amazing healing power of Falun Gong.