Two Women Injected with Nerve-Damaging Drugs, One Lives to Tell the Story

(Minghui.org) Ms. Bi Yunping and Ms. Yang Xiuhua were injected with unknown drugs at the same time while detained in Heilongjiang Provincial Women's Prison. Ms. Yang lived to tell her story; Ms. Bi did not.

Ms. Bi Yunping from Harbin City, Heilongjiang Province, refused to wear the prison uniform and went on a hunger strike in late October 2002 to protest being imprisoned for her faith in Falun Gong. The guards duct-taped her mouth shut.

Ms. Bi was injected with an unknown drug and immediately began experiencing heart problems. She was carried out of the room.

Afterward, Ms. Yang did not hear anything about Ms. Bi. When she was released, she learned that Ms. Bi had died on November 2, 2002, the same day she was given the injection.

Ms. Yang from Shuangcheng City, Heilongjiang Province, had been sentenced to three years in prison in 2002 for practicing Falun Gong.

Because she refused to renounce her belief, she was often chained up in a solitary confinement cell. She went on a hunger strike to protest the inhumane treatment in November 2002. The guards tied her hands to a bed and injected pink fluid in a 500-milliliter glucose bottle into her.

The guards told her that the fluid was a nerve-damaging drug used to torture Falun Gong practitioners. After the injection, she felt very sick, her body felt very heavy, and her skin became very loose. When she looked at other people, they looked like skeletons.

She kept telling herself that she must not die. Gradually, she began to recover, but she suffered severe memory impairment. There are many things she cannot remember, and sometimes it takes a long time for her to recall something. 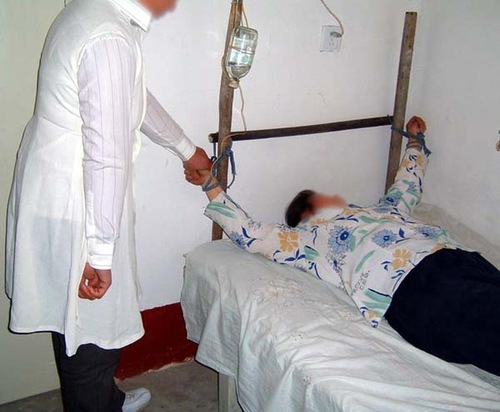 When administering drugs to another Falun Gong practitioner, Zhao Yingling, director of the prison hospital, said, "Bi Yunping died because of what I injected into her. So what?"

Heilongjiang Provincial Women's Prison is notorious in its persecution of Falun Gong practitioners.

It is very difficult to find out about Falun Gong practitioners who died while incarcerated. The prison authorities keep a tight lid on practitioners' whereabouts or any information about them.