(Minghui.org) Upon learning the facts of Falun Gong, some police officers in China have stopped participating in the persecution and began to support practitioners. Below are two such experiences submitted by our readers.

One day, another practitioner and I distributed Minghui calendars at a farmers' market in December last year. Two police officers came and took the three calendars in my hand. While the other practitioner walked away, the younger one of the two officers told me to get into the police van. I did not resist, thinking I could talk with more officers at the police station. 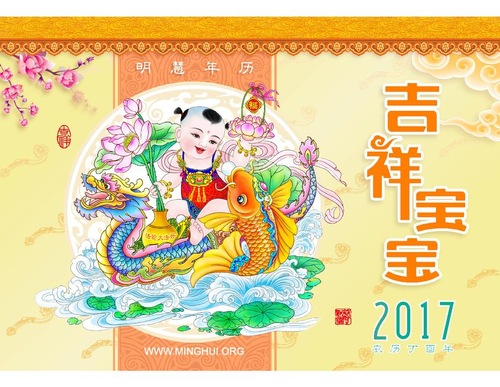 An example of a Minghui calendar. Practitioners in China often use the calendar to tell people about Falun Gong and the ongoing persecution.

Inside the car, the older officer asked if we have met before at my workplace. To avoid trouble, I did not answer and simply said, “Anyway, since I am in the car now, we can have a chat if you have any questions.”

The young officer asked for the price of the calendars. I said they are free: “Some practitioners who have stable income ordered them for distribution at no charge. You know the New Year is coming. We just want every family to be happy and peaceful.”

The car stopped at a parking lot less than half a mile away. The young officer was updating his supervisor: “It's an old lady in her 80s. She seems to have difficulty walking. She only told others Falun Gong is good—nothing else.”

A voice in the phone said, “If that's the case, you can let her go.”

After he ended the call, the young officer turned to me and said, “You can go home now.”

I thanked them and got out of the car. “I know you are good people. You will be blessed for helping the innocent,” I told them.

When two women practitioners in Sichuan Province told people about Falun Gong on the street one day, they encountered four young men.

One of the practitioners talked with a young man about the crimes the Chinese Communist Party had committed and tried to persuade him to quit the Party. The young man did not reply directly and said he was not interested. The practitioner did not give up and continued explaining the importance of renouncing the Party.

Eventually, the officer was convinced and agreed to quit the Communist Party.

During this conversation, the other practitioner caught up with the other three young men. After they spoke for a few minutes, all three agreed to quit the Party and took pamphlets from the practitioner. It was not until then that she discovered they were police officers, too.

“The Consequences of Blindly Following and Idolizing Coordinators”

“My Mission is Clarifying the Facts About Falun Dafa to People”