“We Should Learn Falun Gong!” – Two Events in Denmark and Sweden

(Minghui.org) Falun Gong practitioners from Sweden and Denmark participated in recent activities to introduce this ancient Chinese cultivation practice to the public and raise awareness about the ongoing persecution of Falun Gong in China.

The activities met with a great deal of public support, with many people signing a petition to condemn the persecution in China. A number of people seemed to directly connect with the practice and expressed a desire to learn it.

Teaching the Exercises at a Health Expo

On February 3-5, 2017, practitioners from both countries participated in the “Body-Mind-Spirit” health expo in Copenhagen.

More than two hundred groups and enterprises participated in the expo, and 115 talks were given during the three days. 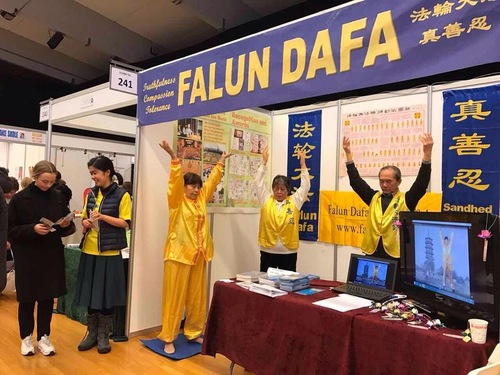 Falun Gong practitioners demonstrate the exercises at the “Body-Mind-Spirit” health expo in Copenhagen. 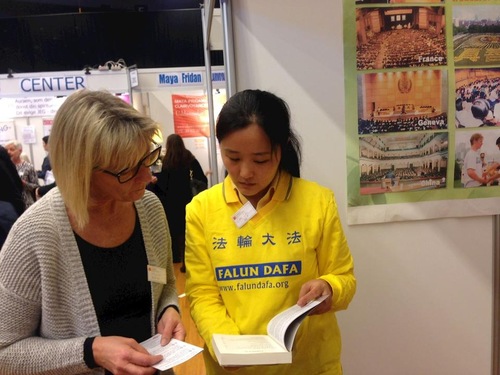 One expo visitor decided to give Falun Gong a try, and bought a copy of Zhuan Falun, the main book of Falun Gong.

One woman resonated with the core principles of Falun Gong, Truthfulness-Compassion-Forbearance. “We all need this,” she said, pointing to the three words on the bookmark with an attached origami lotus flower that she had just received. “I will hang it up at my desk so that I can remind myself to follow these principles.”

At the practitioners' booth was a sign-up sheet for a free nine-day Falun Dafa workshop. In two days, dozens of people had signed up.

Practitioners held a seminar on the first day, providing an overview of the practice and demonstrating the exercises. Some of attendees said that they felt a strong energy flow while trying out the exercises. A number of people bought copies of Zhuan Falun, the main book of Falun Gong.

After hearing about the persecution in China, one man commented that Falun Gong must be good if it is being persecuted by the Chinese Communist Party. 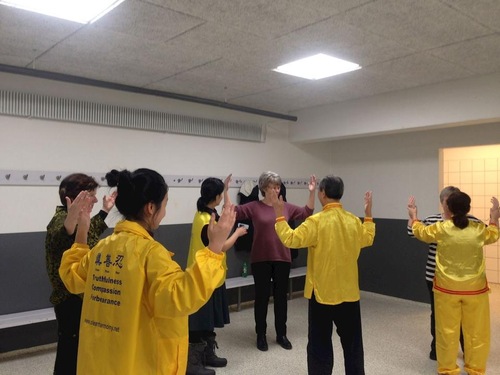 Learning the exercises after the seminar.

“This is what I need,” said Jette from Brønby, after watching the presentation. She had first heard about Falun Gong when she saw the Shen Yun show in Aarhus, Denmark, last year. 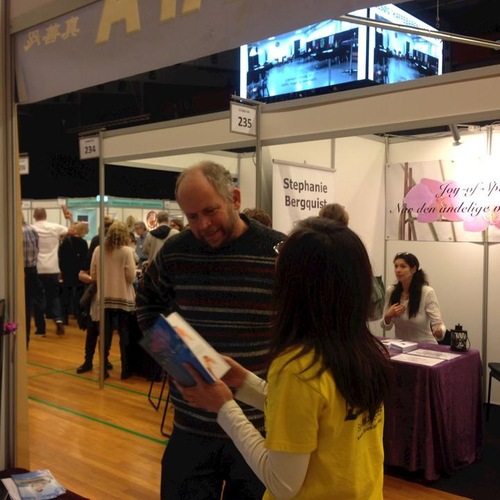 Jesper Nobel said: “If a group scares the communist party, this group has [positive] energy.”

Exposing the Persecution at Mynttorget

Practitioners set up banners and display boards introducing Falun Gong and telling the public about the brutal 18-year persecution in China. 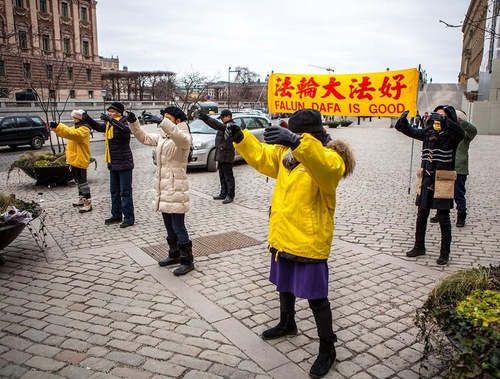 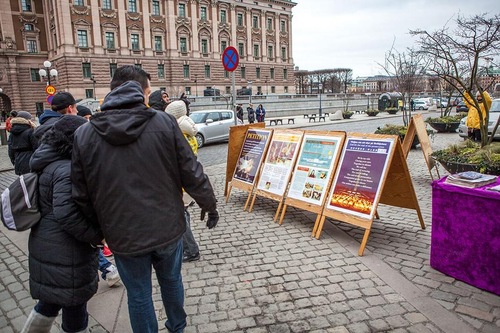 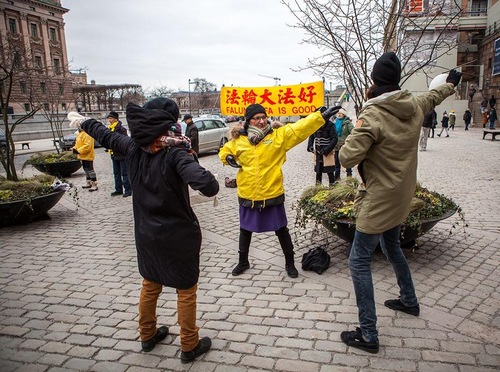 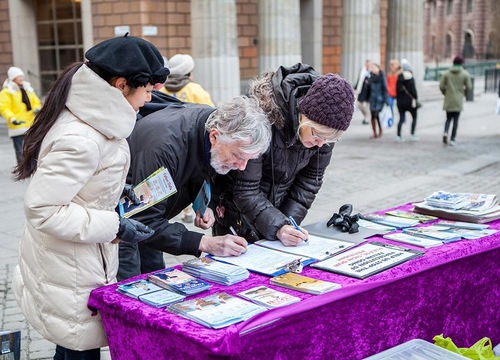 Signing the petition to condemn the persecution. 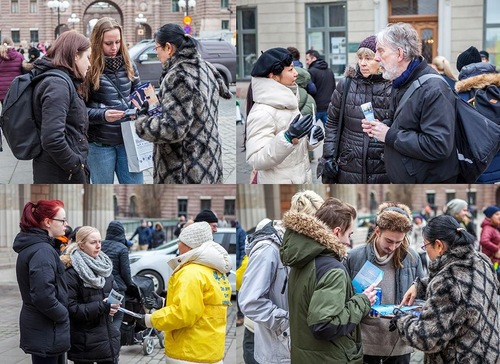 Many people stopped to learn more. A young couple from Falun, a town in central Sweden, accepted a flyer. Seeing what the flyer was about, the wife became excited and said, “I used to live in Poland, where I saw a lot of people practicing Falun Gong in the park. Now we are living in Falun. We should learn Falun Gong!”

They also bought several Falun Gong books, and asked for the contact information of their local exercise site.

Lennath and his wife watched the exercise demonstration for a long time. When they learned that the persecution of Falun Gong has been going on for 18 years, Lennath said to his wife, “Let's sign the petition to show our support.”

Many people were horrified by the Chinese regime's state-sanctioned organ harvesting from prisoners of conscience, the majority of whom are Falun Gong practitioners. They signed a petition calling on the Swedish government to take action to stop the atrocities.