(Minghui.org) Falun Gong practitioners in Sweden held Information Day activities in the downtown area, at the public library, and in local communities and schools around Stockholm during the Chinese New Year. The activities introduced the benefits of Falun Gong and exposed the persecution of the practice by the Chinese Communist Party (CCP), especially the CCP's atrocity of harvesting organs from living practitioners. 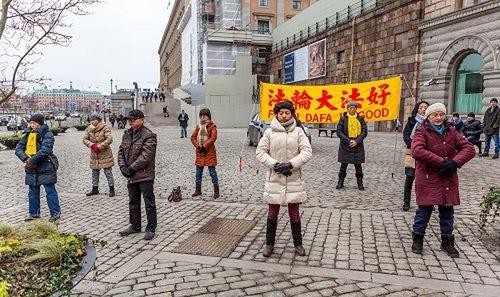 Falun Gong practitioners demonstrate the exercises at Mynttorget on February 4, 2017.

Passersby learn about Falun Gong from the display boards on Mynttorget. 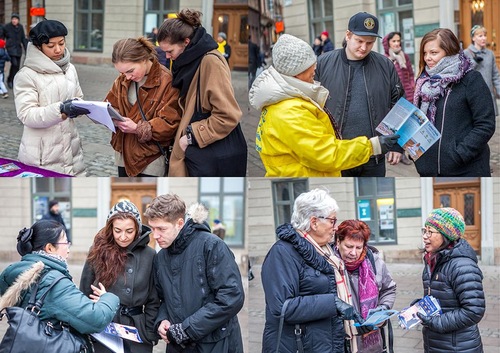 Practitioners talk to people about the persecution of Falun Gong by the CCP. 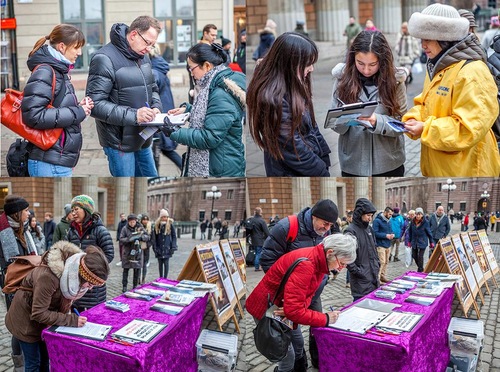 Many people wanted to sign the petition calling for an end to the CCP's forced organ harvesting of prisoners of conscience.

Practitioners' peaceful exercise demonstration and soothing music attracted many people on Mynttorget. A young couple from North Sweden wanted to learn the exercises after learning a little about the practice. The husband was so happy to find Falun Gong that he held the introductory flyer to his chest. He was eager to know if there was a group exercise site near his home and was glad to learn that there was. He told a practitioner, “I will look for it after I get back.”

Another couple said that it was ridiculous to persecute such a great practice. The man said he had seen a Falun Gong group exercise when he visited Seoul. The couple had visited China and loved the Chinese culture, especially Traditional Chinese Medicine. They repeatedly thanked the practitioners for telling them about Falun Gong.

Many people took the initiative to sign a petition calling for an end to the persecution in China.