A Unanimous Vote for Department Chair

(Minghui.org) When the Department of Environmental Engineering at National Chung Hsing University in Taiwan needed a new chair in 2011, the president of the college asked its faculty members to vote for the best candidate.

The result was surprising. All 16 faculty members in the department recommended the same colleague, Mr. Lin Mingde, for this position. “To be recommended by all colleagues to be department chair? That is something I've never seen before,” the president said to Lin.

The students were also overwhelmed. “Professor Lin always takes good care of his students,” said one of them, “Many of the students said that he is their first choice when choosing an adviser.”

Lin, on the other hand, said he had not done anything special. “I'm just an ordinary Falun Dafa practitioner. Like many others, I follow the principles of Truthfulness-Compassion-Forbearance,” he explained. 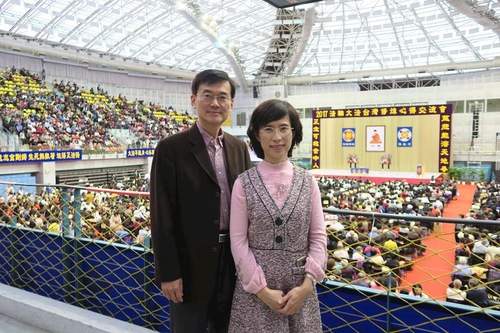 Lin Mingde was curious about many aspects of life when he was young: where did we come from and where are we headed after death? He read about reincarnation and other related topics. When pursuing a graduate degree in the United States many years ago, he joined a Buddhist club with his wife Yang Meiying. Considering himself a Buddhist, Lin's spiritual search continued.

He finished his Ph.D. in 1995 and was planning to return to Taiwan. “One day, someone gave me a copy of Falun Gong and Master Li's audio lectures. That was the first time I heard about the practice,” he recalled.

Several years later, the president of the Buddhist Club found Lin and said to him, “Falun Dafa is very good. Be sure not to miss it.” Lin thus contacted a group exercise location on campus and began to read all the Falun Dafa books he could find.

The exercises and the Falun Dafa teachings broadened his views. “In the past, sometimes I would panic when encountering new situations, or I complained about things that seemed unfair to me,” he explained. “I now know how to handle them with compassion and patience. That is, I am less often disturbed.”

When applying these principles at his workplace, Lin found that there were many areas where he could improve to become a better person. As a result, his colleagues unanimously appointed Lin as the department chair.

Lin said that this was because Falun Dafa made him more responsible. “In the past, I would put effort into getting things done just well enough. I have now learned to do the very best I can,” he added.

His dedication and hard work not only earned the trust of his colleagues, but also gained the respect of his fellow community members. Over the past several years, the community has elected him representative for the township. “Whatever you do will be good for us. We all trust you,” a neighbor once said to him.

Change in the Family

Lin's wife Yang Meiying is also a Falun Dafa practitioner. Back when she was working on her graduate degree in the United States, she developed an intestinal disease and suffered from anemia. After returning to Taiwan, she took care of her elderly parents and children for 14 years, which caused tremendous physical fatigue and mental stress. Because of the discomfort and depression, she turned to Buddhism. But the effect was minimal.

Five years ago, she thought about giving Falun Dafa a try. She went to the practice site on campus to learn the exercises and began reading Zhuan Falun at home. Upon reading the sentence, “To tell you the truth, the entire cultivation process for a practitioner is one of constantly giving up human attachments,” she immediately knew that this book was special and could guide her in true cultivation practice.

“Falun Dafa helps me achieve harmony of mind and body,” Yang said. In the past, she was often worried about her children and friends. The practice of Falun Dafa opened her mind and taught her to be compassionate towards everyone.

Lin also noticed the positive changes in his wife. Once, their teenaged son said to his mother, “Go away! You make me ashamed.” Upon hearing the remarks, Lin expected an intense fight between mother and son. But his wife remained calm and did not burst into anger.

“We are so lucky that your mother is a practitioner now,” Lin said to his son. His son nodded: he knows that is indeed fortunate to live in such a harmonious family.