“I Am Getting Younger And Younger”

(Minghui.org) “I almost died of liver cancer 20 years ago,” said 70-year old Mr. Liu, “but now I feel like I'm getting younger and younger.”

Mr. Liu, a Chinese-Australian, escaped the Vietnamese communist regime when he was young. Twenty years ago, when he was a successful businessman with a happy family, he was diagnosed with liver disease. His ferritin level was abnormally high. He tried all kinds of therapies, including both Western and Chinese medicine, but nothing worked. For ten years, he spent a considerable amount of money on the therapies. His worst experience was spending 20 thousand U.S. dollars on one injection of sheep placenta extraction in Switzerland.

His family doctor told him that his ferritin level was sky high in 1998, and he should consider writing a will and making arrangements for his funeral.

“My son was only ten back then,” Mr. Liu said, “I was desperate. Because of the cancer, I couldn't sleep well for many years. I looked so old, and no one could tell my real age.”

One of his friends introduced Mr. Liu to Falun Gong in August 1998. This friend advised him to put down his worries about life and death if he wanted to practice.

Mr. Liu then recalled the Falun Gong events he had previously seen in Hong Kong. He had obtained a copy of Zhuan Falun (the main book of Falun Gong) in 1996, but never had a chance to read it. Now, he decided to give Falun Gong a try.

Mr. Liu read Zhuan Falun carefully, and tried to follow the teachings of “Truthfulness-Compassion-Forbearance” in his daily life. Three months later, he had the blood examination again. The result was surprising and frustrating. The ferritin level had doubled.

“It was a shocking reminder,” Mr. Liu said, “I realized that I wasn't genuinely cultivating. Master Li Hongzhi (the founder of Falun Gong) said in Zhuan Falun that the practice will purify one's body if one sincerely cultivates.”

“Actually, after I started practicing, all of the pains and other symptoms disappeared. I was able to eat a lot and sleep soundly. Why did the ferritin level double?” Mr. Liu recalled his thoughts back then.

“This was not a coincidence. Nothing is a coincidence to a cultivator,” Mr. Liu said, “I realized that the results were to remind me to eliminate my pursuit. The pursuit of low ferritin.”

Mr. Liu then completely de-emphasized the disease in his heart and no longer thought about it. Besides the business and the housework, all he did each day was read Zhuan Falun and do the exercises.

He hasn't taken any medicine for the last 20 years, nor has he had any physical examinations. He is very healthy. 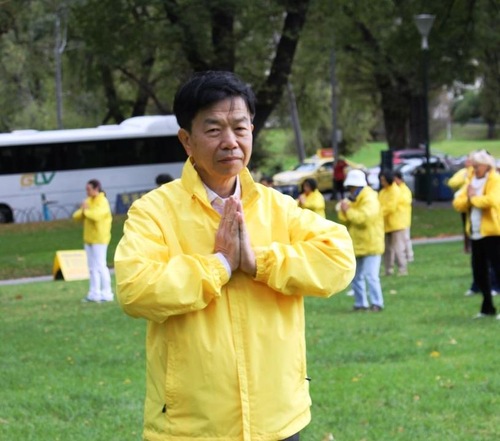 Mr. Liu thanks Master Li Hongzhi for renewing his life.

Mr. Liu knows that Master Li Hongzhi purified his body, which is the first step in cultivation. The next was up to him—how to follow the principles of Truthfulness-Compassion-Forbearance and diligently cultivate.

Mr. Liu recalled, “At the beginning, I could not sit in the double lotus position in meditation. My legs were in great pain. I tried to add five minutes to the meditation time often, but it took me almost six months to finally be able to finish the entire exercise.”

“I clearly sensed that clusters of dark and filthy stuff were leaving my body during the meditation when I endured the leg pain. It was just like what Master Li described in the fourth lecture of Zhuan Falun.”

Mr. Liu was fortunate to have the opportunity to attend Master Li's lecture in Sydney in May 1999.

He said, “It was unforgettable. I could not help but shed tears at the lecture. Every sentence Master Li said touched my heart. I cannot describe in words how I felt. I just kept crying, and could not stop.”

After that lecture, Mr. Liu had a better understanding of Falun Gong cultivation. “I was more determined to cultivate. I said to myself, no matter what happens, I will follow Master Li's teachings.”

Mr. Liu has devoted himself to the peaceful resistance after the Chinese Communist Party launched the persecution of Falun Gong in 1999.

“I have attended all kinds of activities, passing out flyers, taking part in parades, telling people what Falun Gong really is. Nothing can change my solid belief,” he said.

“In daily life, I cultivate diligently. I try to look inward for my own faults during conflicts, and try to improve myself through the conflicts.”

Mr. Liu said, “I felt my body become light when I first started practicing. This feeling has lasted to this day. Looking at the pictures taken 20 years ago, I look younger now.”

“A Call to Rescue Liaoning Woman Detained Again for Her Faith”