(Minghui.org) Today's news from China includes incidents of persecution that took place in 11 cities or counties in 10 provinces. According to this report, 9 Falun Gong practitioners were subjected to mistreatment during their detention, and at least 17 were illegally arrested. 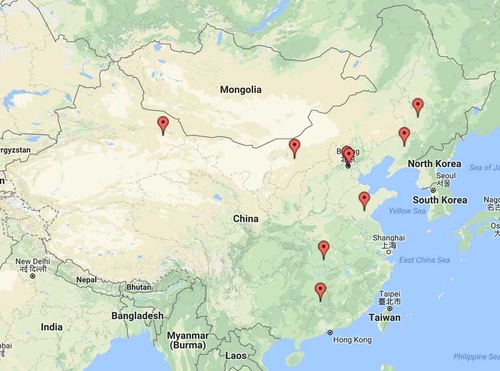 Ms. Wang Guixiang, 48, from the Qingshan District was arrested by officers from the Domestic Security Division on October 7, 2017, when she went to take care of her elderly mother who is sick in bed.

Ms. Wang has now been officially placed under arrest.

The officers confiscated photos of the founder of Falun Gong, Falun Gong books, DVDs, and about 8,000 yuan in cash.

Ms. Hao Fengchun from Xijiangtou Village, Nancai Town, the Shunyi District, was reported to the authorities in early November 2017 for talking to people about Falun Gong.

Ms. Hao and her husband were arrested by officers from the Nancai Police Station. Their home was ransacked.

Ms. Huo Runzhi, 73, passed away on November 4, 2017. She was incarcerated in the Jilin Women's Prison and developed rectal cancer.

The prison authorities refused to release her until she was terminally ill. She was then released on medical parole. Her family took her to the Nong'an County Hospital, where she died.

Ms. Xing Ximei was arrested by officers from the Andi Town Police Station on November 7, 2017, for distributing Falun Dafa calendars. She was taken to the Linyi Detention Center.

Ms. Xing was abused in the detention center and was in critical condition. She was taken to the hospital, but died days later. Her family tried to take photos of her, but were stopped by the guards.

Ms. Hu Aiqin and Ms. Zhang Xihua were seized by residential community personnel in the Railway area in November 2017. They were taken to a detention center, but their current whereabouts are unknown.

Participant in the persecution of the five practitioners:Shuang Shiquan (双世权), judge, Qianjiang Court: +86-7286493761

Ms. Huang Xiaofen faces trial at the No. 8 courtroom, Beihu District Court, on the morning of December 6, 2017.

Mr. Xing Bo was arrested by officers from the Wenguan Police Station in the Dadong District on the afternoon of November 27, 2017. His home was ransacked.

Mr. Xing was detained for 15 days.

Mr. Xiang Qingshan was arrested on November 13, 2017. He was sentenced to prison two weeks later.

Mr. Xiang's family was told to pick up his arrest warrant on November 14. Officer Chen Fugang forced them to sign the warrant.

The Jintang Court tried Mr. Xiang in late November without informing his family or his lawyer. There has still been no official notice from the court about his sentence.

Ms. Pan Chengying, in her forties, from the Lishui District, Nanjing City was sentenced to two years in prison for refusing to renounce her belief in Falun Gong. She is appealing the verdict.

Ms. Pan, a teacher at the Lishui District Middle School, was arrested on May 17, 2016, and taken to the Baima Brainwashing Center the following day. The police ransacked her home three times after her arrest.

Ms. Pan was taken to the Nanjing Detention Center.

She appeared in court in May 2017, and was sentenced months later.

Some of the practitioners had filed complaints against the police for interrogating them with torture, but no officers have yet been charged.

“Brazil: The Art of Truth, Compassion, Forbearance Exhibition Resonates with Viewers of All Ages”