(Minghui.org) Tianti Books, a bookstore in Seoul, South Korea, recently completed another free nine-day Falun Gong workshop. Several months after the seminar, a number of workshop participants returned to the bookstore to share and discuss their experiences in practicing Falun Gong. 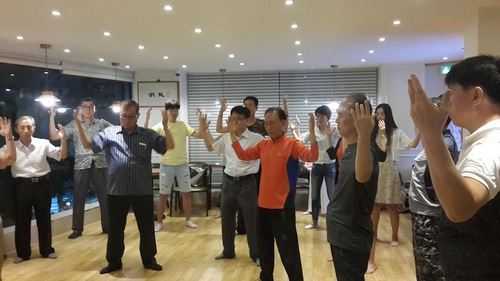 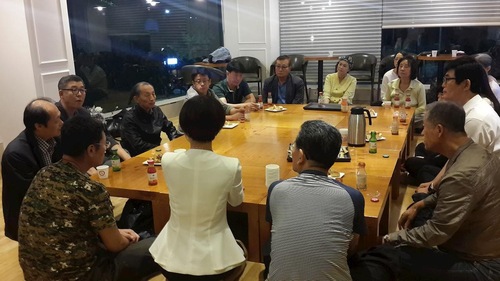 Mr. Yin Hongzhen obtained a brochure about Falun Gong on his way to work, which caught his interest. He later learned about the nine-day workshop from an online search.

A few years ago, Mr. Yin had developed water intoxication, a severe disruption in electrolytes brought about by drinking excessive amounts of water.

“I had a MRI at a big hospital, and had acupuncture therapy, but none helped. I really suffered from it. What amazed me was that on the fifth day of the workshop, the symptoms disappeared. That night was the first night I had a good sleep in the past few years,” Mr. Yin said.

Mr. Yin also had cardiac arrhythmia, which often woke him up from sleep.

“Now, I do the fifth exercise—the meditation, and the arrhythmia disappeared.”

Mr. Yin smiled, “I always feel happy when talking to Falun Gong practitioners. I had tried so many therapies, but none of them is comparable to practicing Falun Gong.”

Mr. An Pushun works in the financial industry. He decided to take the nine-day workshop after hearing about Falun Gong's health benefits.

“My palms felt hot during the exercises. I can also feel the Falun (law wheel) rotating,” Mr. An said. “My whole body feels lighter when walking.”

For Mr. An, the most amazing part of the seminar was the emphasis on morality. “I realized that cultivating the physical body is not enough. The most important part of the practice is to improve one's moral standard,” Mr. An said. “I am amazed that after the Falun Gong workshop, I no longer fight for personal interests.”

“I suffered from insomnia for a long time, but Falun Gong healed it. I can now enjoy a good night's sleep,” said Mr. An.

Mr. Zheng Zhenxiu also picked up a Falun Gong brochure on his way to work. He experienced a lot of discomfort during the workshop, such as itchiness and sleepiness.

“On the fourth day, I was very sleepy, but I heard Master Li's voice on the tape clearly. On the sixth day, I had diarrhea,” Mr. Zheng recalled, “but after that, my body was purified. I feel relaxed and clean. The air around me feels comfortable. I was surrounded by gentle energy.”

Mr. Li Zanyu also experienced diarrhea during the nine-day workshop. “But I feel good now. It's amazing,” he said.

Mr. Jin Jishan had an awkward feeling throughout his body during the first six days of the seminar. “Very uncomfortable. But after that, my insomnia and frequent urination were healed. It is hard to describe the comfortable feeling I'm experiencing now,” he said.

Mr. Li Shan noticed that his vision improved. “After a few months of practicing Falun Gong, one day on the subway, I found that I didn't need glasses to read the map. All the letters looked clear.” Mr. Li said that Falun Gong also had other benefits. “I found that my memory improved too,” he added.

He encouraged newcomers to read the teachings seriously.

Ms. Piao Xiangchun from China remarked that Falun Gong emphasizes Forbearance. “If you understand the teaching well, you can handle conflicts calmly. You don't have to force yourself to forbear. Everything comes naturally, and you can treat everybody with compassion,” she said.

Tianti Books in Seoul holds two nine-day workshops every month. Tianti Books & Cafe in Manhattan, New York holds one workshop monthly. The last workshop of 2017 in New York starts Monday, December 11. The schedule of workshops from January to April 2018 is published on their website: https://www.tiantibooks.org/pages/events