(Minghui.org) On October 14, 2017, candidates from the Liberal National Party (LNP), Independents, and Greens took up an offer by practitioners to experience Falun Dafa first-hand at the local practice site in Harley Park, Labrador.

Australian candidates for the Queensland Government election have commended the good work Falun Dafa practitioners do in the Gold Coast community.

Each week practitioners volunteer their time to set up free exercise sites and help others enjoy the many health and psychological benefits of doing Falun Dafa’s five exercises. Falun Dafa is a member of Gold Coast City Council’s Active and Healthy Program, which provides free a-frame signs and prints Dafa brochures with the council’s logo on them. 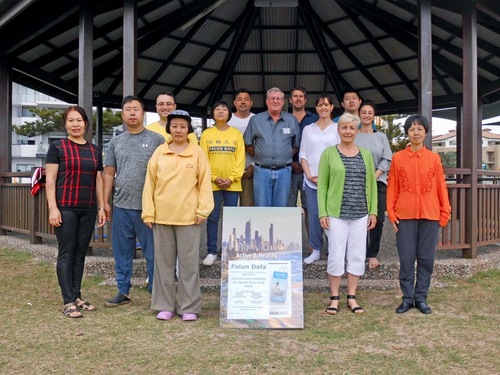 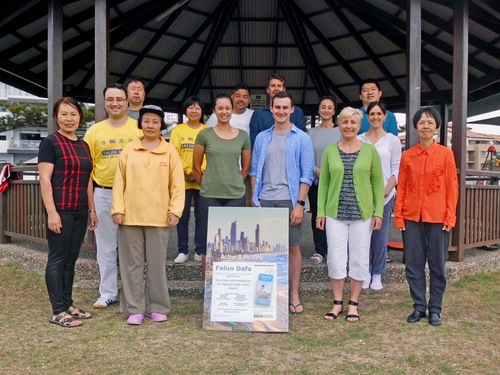 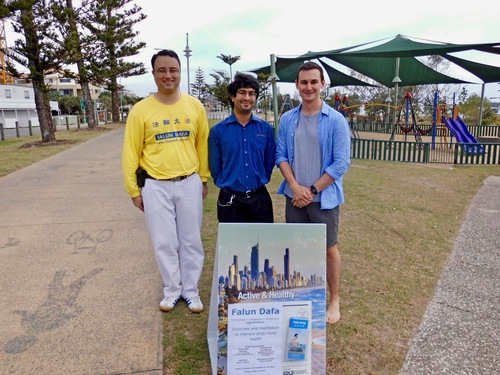 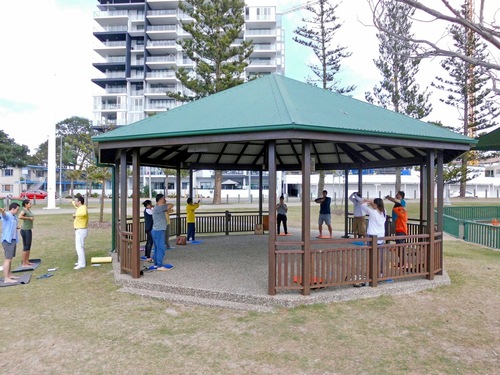 All three candidates for the State Government’s new Seat of Bonney had a chance to learn each exercise. LNP candidate Sam O’Connor and his girlfriend, Cat, did all of the exercises and found them to be very interesting.

“Thanks to the local Falun Dafa group for inviting me to visit today and especially to Richard for leading me through the exercises,” said Mr. O’Connor, pressing his palms together in gratitude.

“I think I understand what you mean about the flow of [qi] energy!”

Independent candidate Ron Nightingale felt a past connection to the Dafa exercises, recalling similar wheel-embracing movements he did before in the military and visual meditation techniques he had heard of in his ancestral homeland of Scotland.

“My thanks to Richard and Nina and all the guys and girls from Falun Dafa who invited me down to observe their exercise group and learn more about the wonderful work you are doing promoting truthfulness, compassion, and tolerance,” Mr. Nightingale said.

“The exercises were very relaxing.”

Greens candidate Amin Javanmard was initially unable to attend due to work commitments but decided to come anyway for a short time and show his support in-person.

He accepted brochures about Falun Dafa’s exercises and the ongoing human rights abuses in China, where practitioners are being arbitrarily detained and tortured and having their organs harvested against their will and even killed by the communist regime.

“I popped in at the invite of the Falun Dafa Association of Australia, Queensland Branch Inc., to observe them during their weekly exercise session in the Harley Park gazebo. Falun Dafa practitioners have suffered state persecution in China,” Mr. Javanmard said.

“The vast variety of people, traditions, and cultures living and sharing with each other is one of the things that makes Bonney – and the Gold Coast in general – such a great place … the Greens recognize this as one of this nation's strengths and will fight to keep us as the welcoming society we are.”

Dafa practitioners thanked all the candidates for their time and kind words of support.

“Changing My Notions and Becoming a Genuine Practitioner”