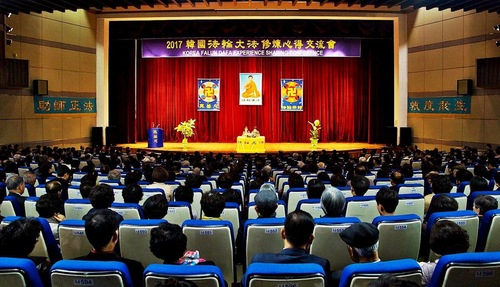 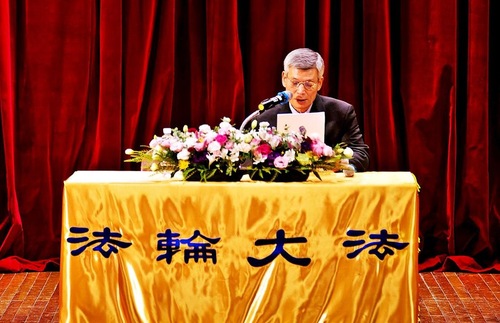 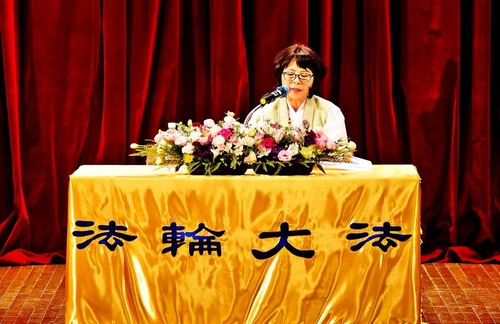 Falun Dafa Cured My Diseases and Helped During a Family Crisis

Ms. Ho had been weak and sickly since her childhood. She had more health problems, including migraines and depression after she got married. One day shortly after she started practicing Falun Dafa, she felt a cold breeze at her feet during her meditation. She said, “Ever since then, all my diseases were gone. I now feel light and relaxed. I personally experienced what Master described in Zhuan Falun.”

Ms. Ho also shared about how following the Falun Dafa principles helped her through a family crisis. Three years after she began cultivating, she found out that her husband had an affair. She experienced strong feelings of betrayal and agony. She knew it was a tough test, so she studied the Fa teachings more, and continued to improve her own xinxing, following Dafa's principles. She eventually let go of her attachment to her husband's affair. Her husband ended the relationship and returned home. Ms. Ho forgave her husband and treated him with compassion. Her husband was very touched by her big heart. He said, “You Falun Dafa practitioners are indeed divine!” He became very supportive of her cultivation.

Ms. Park said she used to have a poor relationship with her daughter before she began cultivating. They always bickered with each other. Ms. Park was deeply troubled when her daughter came home drunk or ran away from home.

After she started cultivating, Ms. Park remembered Master's teaching whenever she felt agonized by her daughter's behavior, and she tried to better understand her daughter. One night, her daughter didn't come home until almost the next morning, and she was very drunk. Ms. Park remained calm and didn't vent any anger like she had in the past. She instead showed great care by asking her daughter why she hadn't put on some warmer clothes.

Ms. Park looked within and found faults of her own. She had let out her own anxiety on her daughter when the daughter was young. She and her husband had sent their daughter to China for high school and college study. The daughter had to live a lonely and hard life by herself for many years. Ms. Park called her daughter one day, and sincerely apologized, and asked for her forgiveness. Her daughter opened her heart and shared her dilemmas with her mother. Their relationship was subsequently greatly improved. Her daughter said, “I have never seen mom get angry again since she began cultivating!” The daughter has since started reading Zhuan Falun.

Ms. Lee had been hospitalized in 2015 for hydropneumonia and an abscess on her liver. She felt that life was hard and painful. Another patient's family member introduced her to the book Zhuan Falun. She learned the meaning of life from the book, and decided to cultivate herself. Her health was completely restored by practicing Falun Dafa.

She works as an assistant in a public bathhouse. Her colleagues were jealous of her because the customers preferred Ms. Lee, and some of her colleagues often said insulting things to her. Ms. Lee tried to hold her temper but couldn't help saying things back at first. She realized later it was due to her strong attachment to her ego. She made up her mind to eliminate it with strong will to endure the pain.

One day, when she was doing the fifth exercise at home, and trying to separate her attachment to ego from her true self, she said to her ego, “You have been working hard and following me all these years. I'm a Falun Dafa practitioner now. You can't stay here any more. You should immediately leave me.” Tears came to her eyes, as she could feel her attachment to ego leaving her and her capacity to endure blossoming.

She said, “I felt miraculously calm when I was wronged. I smiled at the cuss words and felt that the people who cursed me were very pitiful. I'm no longer disturbed. I have gained understanding about looking within unconditionally. Thank you, Master!”

Ms. Pu from China recounted the past twenty years of her cultivation, and expressed her gratitude for Master's salvation. She also shared her experience of making truth clarifying phone calls to China.

When Ms. Pu started making phone calls to public security organs in China, the biggest obstacle was her fear. She was so nervous that her hands kept shaking. She knew that the evil was magnifying her fear, and attempting to block her from offering salvation to sentient beings. She encouraged herself, knowing that saving people was the most righteous thing for a Falun Dafa practitioner to do, and that those who had committed crimes should be afraid. As she made more phone calls, she became more and more calm and filled with righteous thoughts.

The police officers who lived under the Communist Party's manipulation and slanderous propaganda used filthy words to cuss at Ms. Pu. She felt hurt and saddened at first, and sometimes argued with the officers. But she realized that her struggling mentality had been triggered as she raised her voice higher and higher. She knew it was time to eliminate her own attachments to ego and the fighting mentality. She pondered about whether her own way of talking was due to her own Communist Party influence. She subsequently found ways to improve by eliminating her own problems, including being imposing, threatening, and lecturing.

Ms. Pu realized that the police officers were truly victims of the persecution, because they had been poisoned by the Communist Party. Thinking they might only get one chance to learn the true facts about Falun Dafa from her, she made up her mind to clarify the facts to them as long as they would listen. She personally experienced how compassion is the key to offering salvation to more sentient beings.

Conference attendees were touched by the experiences shared by the practitioners. Many Dafa practitioners shed tears. Some senior practitioners said that the latecomers had caught up so well. They were determined to cultivate themselves diligently.

“China Fahui | The Compassion of a Dafa Disciple”