(Minghui.org) Falun Gong practitioners participated in a health expo in Brade, a beautiful town in Midtjylland region of Denmark, on November 4-5, 2017. Many expo visitors were fascinated by this traditional Eastern cultivation practice based on the principles of Truthfulness-Compassion-Forbearance. 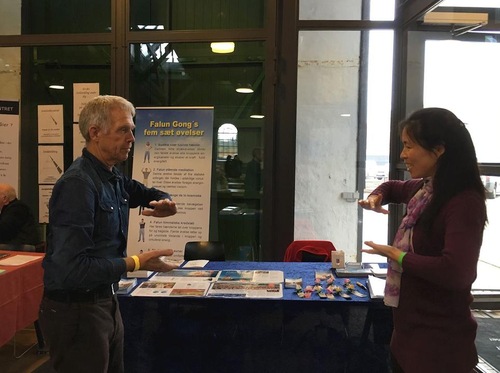 A man named Leo read aloud, “Truthfulness, Compassion, Forbearance,” words printed on a practitioner's shirt. He kept saying, “Truthfulness, Compassion and Forbearance are great!” The practitioner gave him a brief introduction to Falun Gong, including its principles, exercises, and the practice's wide spread to more than 100 countries around the world.

Leo was very interested in the topics of energy and cultivation practice. He learned all five sets of Falun Gong exercises on the spot, and bought the book Zhuan Falun. 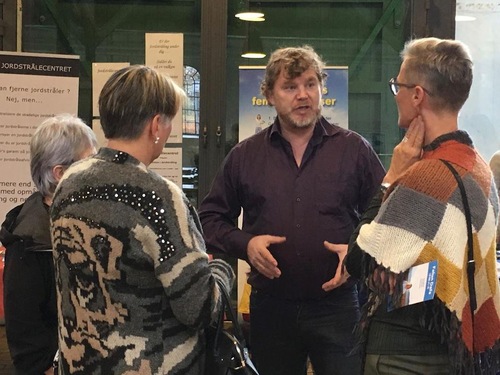 Another gentleman named Flamming said he had learned some movements from the Falun Gong exercises at a health expo in Aarhus. Since he had more time this time, he learned all five exercises. While doing the first exercise, he said he felt a very warm and comforting energy all over his body.

Nik was selling his mother's oil paintings at the health expo. He told a Falun Gong practitioner that his mother's paintings were about admiration of God and communication with God. His mother told him to sell the paintings to those who could understand and appreciate them. Though he didn't completely understand what his mother meant, he tried to follow her wish. Nik said he had read many books, trying to gain better understanding of this topic. When he opened the book Zhuan Falun, and read a couple of paragraphs, he immediately found some answers to his questions. He said, “I would like to buy the book. I hope to learn Falun Gong in the future.”

During a group introduction session, practitioners played a video about Falun Gong, and shared their personal experiences of self-cultivation. Many people became interested in Falun Gong, and left their contact information for future workshops.

One of the health expo organizers visited the Falun Gong booth near the end of the expo, and said, “You have done a great job! Your booth is the most popular at the expo. People never stopped coming and learning your exercises. Come back next time!”