(Minghui.org) Falun Dafa practitioners in Denmark participated in the annual Mind Body Spirit Health Expo in Aarhus, the second largest city of Denmark, at the end of September.

The three-day event attracted a lot of people, many of whom experienced the beauty of Falun Dafa and learned the exercises at the event. 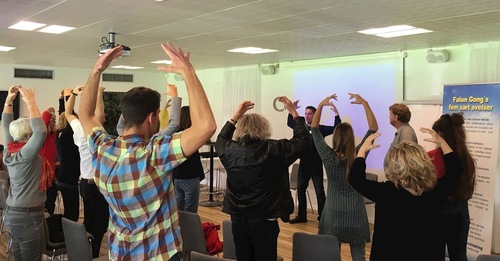 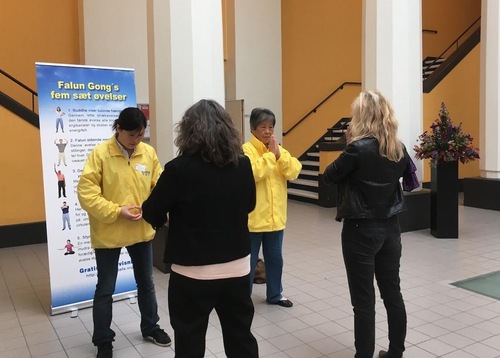 Falun Dafa exercise demonstration at the entrance of the exhibition hall.

Many visitors encountered Falun Dafa (also called Falun Gong) at the exhibition hall entrance where two practitioners demonstrated the exercises. Those who were interested could pick up a flier from a nearby table.

Mirelle learned the five sets of exercises and was amazed by the comfortable energy field she felt. She asked if she could meditate 10 more minutes. After that, she bought a copy of Zhuan Falun and left her contact information to be notified of the next group practice. She planned to invite a friend from Copenhagen to join her as well.

While teaching the exercises, a practitioner noticed that a young man's hands were trembling. The practitioner told him to relax but he said that it was not because of stress. Instead, he said he felt strong energy waves impacting his whole body. Later, he also attended an introductory session about Falun Dafa. 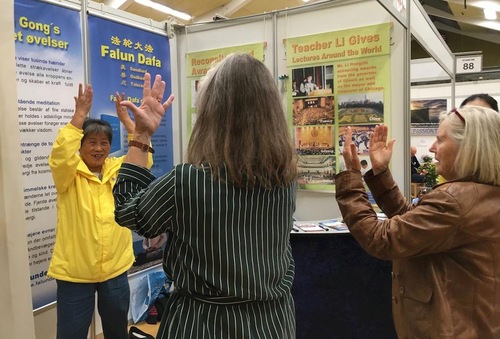 Teaching the exercises at the Falun Dafa booth. 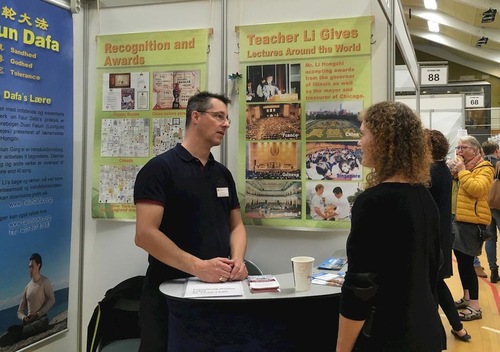 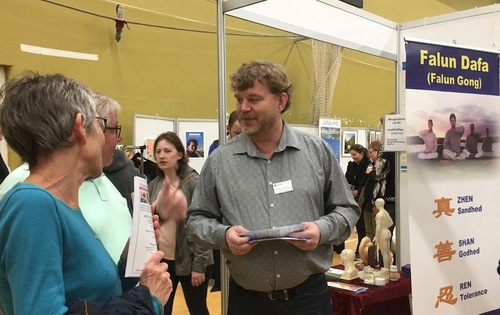 An Irish woman who lives in Denmark said that she felt drawn to the Falun Dafa booth every time she walked by. By the third time, she decided to ask what the practice was all about.

After learning the benefits of this ancient spiritual practice, she bought an English translation of Zhuan Falun and invited the practitioners to teach Falun Dafa in her community.

During an introductory session, a practitioner introduced the origins of Falun Dafa and spoke about its wide spread to more than 100 countries and regions around the world. A video was shown, in which Western and Chinese practitioners shared their personal experiences with the practice.

The sharing gave attendees many insights. When the speaker invited attendees to practice the second exercise (Falun Standing Stance), many people noted the energy field.

This was the fourth time for practitioners to participate in the Aarhus health expo. The first time was 17 years ago in 2000. The persecution of Falun Gong had just started but many people in Aarhus had never heard about Falun Gong or the persecution in China.

After seventeen years, practitioners have noticed that most people express appreciation for the principles of Truthfulness-Compassion-Tolerance, and more and more people are aware of the brutal persecution of Falun Gong in China.

“From London to Lima: Introducing Falun Dafa to Students in the UK and Peru”

“Cultivating While Coordinating and Clarifying the Facts to Government Officials”