(Minghui.org) Today's news from China includes incidents of persecution that took place in 9 cities or counties in 6 provinces. According to this report, 3 Falun Gong practitioners were subjected to mistreatment during their detention, and at least 8 were illegally arrested. 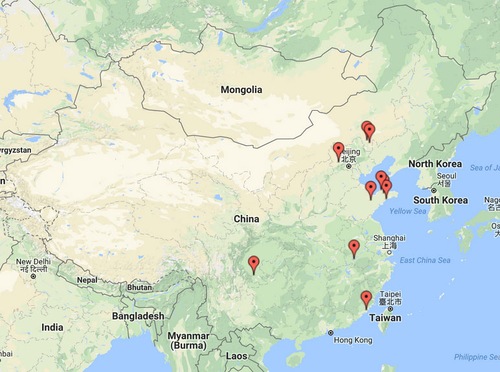 Mr. Zhao Jinzhu, 69, and his wife Ms. Zhang Cairong from Fengshuigou, Yuanbaoshan District, as well as Ms. Xiao were arrested on September 8, 2017 when they were distributing Falun Gong materials. They were held at the Pingzhuang Detention Center. Mr. Zhao was detained for ten days, while Ms. Zhang and Ms. Xiao were held for five days.

Mr. Su Tan was scheduled to be tried by Cuiping District Court on the morning of September 14, 2017. He was arrested by officers from the Yibin Domestic Security Division on August 12, 2016 for posting Falun Gong fliers. He has been held at Dayi Detention Center.

Ms. Liu Guoqin, in her 60s, was arrested on September 8, 2017 when she was distributing Falun Gong materials. She is held at the Anqing City Detention Center.

Mr. Li Hailei was arrested by officers from the Domestic Security Division around September 1, 2017. He is held at Weifang Detention Center.

Taochun Town practitioners Mr. Zhao Shengguang and Ms. Sun Huijuan were arrested for distributing Falun Gong materials in the countryside by officers from the Taochun Police Station on the evening of September 9, 2017. The officers ransacked Mr. Zhao's home on the morning of September 10 and confiscated two computers, a printer, a car, and other personal items.

Mr. Zhang Jiguo was detained for 15 days at the Haiyang Detention Center for suing the former Chinese Communist Party leader Jiang Zemin for initiating the persecution of Falun Gong.

Ms. Zhuang Yufen was detained for seven days at the Zhangjiagou Detention Center.

Ms. Ma Yingmei and Ms. Chen Yulian were reported to police when they were talking to others about the persecution of Falun Gong in Taoyuan Village, Zhangjiabao Town on September 10, 2017. Two officers ransacked the home of Ms. Ma and confiscated her social security bank card, 600 yuan in cash, Falun Gong materials, and other personal items.

Ms. Yuan Dongying was an accountant at the No. 7 Construction Office of Fujian Province No.1 Highway Construction Corporation. She was sent to forced labor for one year in March 2001, two years in April 2004, and again for two years in September 2009.

She filed a legal complaint against the former Chinese leader in May 2015 and was arrested by Quanzhou Domestic Security Division on September 23, 2015. Her home was searched. She was taken to Quanzhou Detention Center on September 24 but was released on bail because she failed the physical exam. She was placed under her employer's supervision.