Hong Kong: Rally and March Against Persecution of Falun Gong in the Mainland

(Minghui.org) October 1, 2017 marks the 68th year since the Chinese Communist Party (CCP) took control of China. Falun Gong practitioners held a rally on Cheung Sha Wan Playground and a march to support the more than 280 million Chinese citizens who have renounced their current and past memberships in the CCP and its youth organizations.

Several democratic leaders spoke at the rally. They named October 1 a day of national mourning, especially given the Party’s 18-year-long persecution of Falun Gong and the state-sanctioned harvesting of organs from living Falun Gong practitioners. 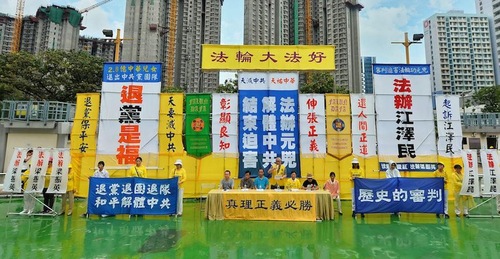 Rally in Hong Kong against the persecution of Falun Gong on October 1. 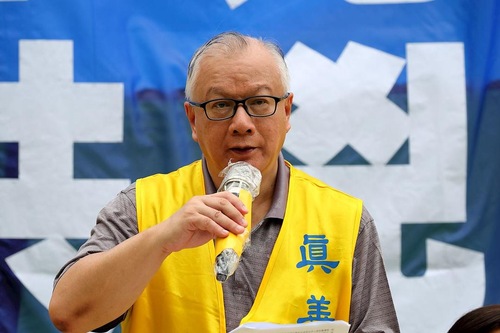 Kan Hung-cheung, spokesperson for the Hong Kong Falun Dafa Association, spoke at the rally, where he called for an end to the persecution of Falun Gong and the killing of practitioners for their organs in mainland China. He stressed that only the disintegration of the CCP can stop the persecution. 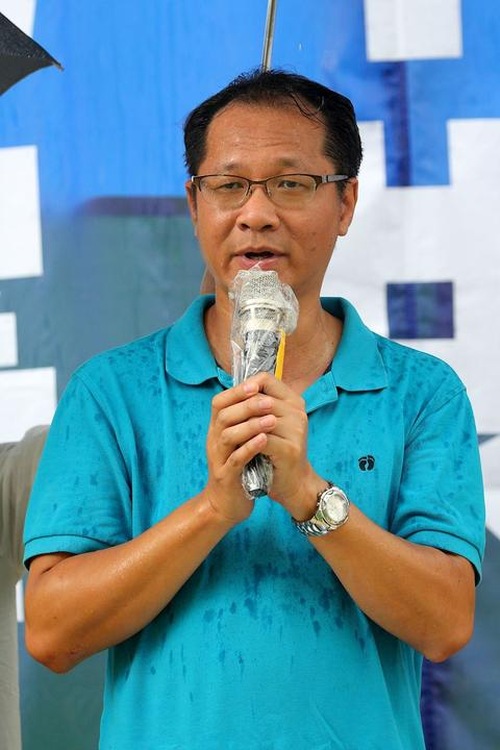 Richard Tsoi, the vice-chairman of the Democratic Party in Hong Kong, admires the Falun Gong practitioners' perseverance in peaceful protesting the persecution.

Richard Tsoi, the vice-chairman of the Democratic Party in Hong Kong, said, “Facing the CCP, there are no miracles. I admire the Falun Gong perseverance in peacefully protesting the persecution. We believe, that under the dictatorship, those who persevere will win in the end.” 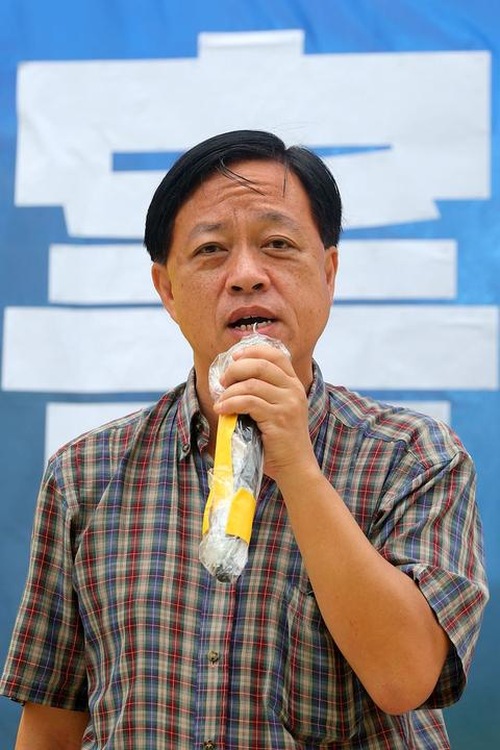 Former district councilor Wing-yin Lam commended Falun Gong practitioners who call for an end to the persecution throughout the world, while facing the severe persecution. He said, “They follow Truthfulness-Compassion-Forbearance against the persecution and to awaken people around them.”

He said he realized that the practitioners’ effort has encouraged Hong Kong and Chinese people: “When we stand on the street, we hear applause from residents. Tourists from the mainland wonder how people dare to face the CCP's control and protest its unfair treatment.”

Several democratic legislators sent their pre-recorded speeches to the event. Chi-wai Wu, the current chairman of Democratic Party and a member of the Legislative Council of Hong Kong, said, “Under the CCP's control, there is live organ harvesting. It is unacceptable in any civilized society. The CCP regime faces condemnation by the world.”

Cheuk-ting Lam, another member of the Legislative Council, called on the Chinese regime to stop its crimes against humanity, including the persecution of Falun Gong. He called for investigation into the organ harvesting crimes and bringing the perpetrators to justice. 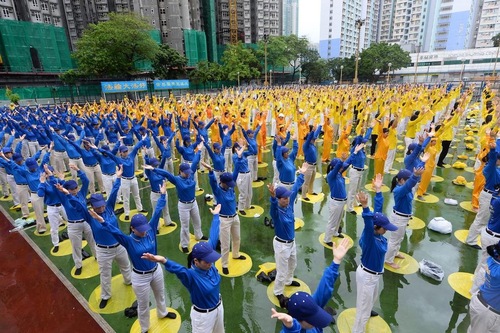 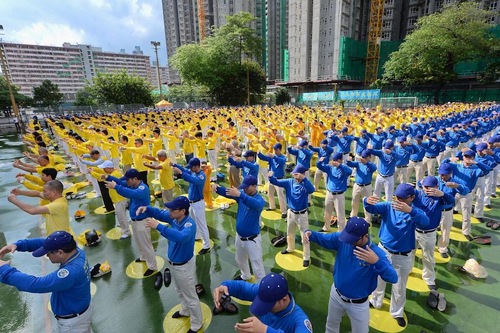 The weather during the day changed abruptly between clear skies and rain. Around 900 practitioners from Hong Kong and other regions demonstrated the Falun Gong exercises on Cheung Sha Wan Playground in the morning before convening for the rally at noon.

The march started from Cheung Sha Wan Playground at 2:00 p.m. and was led by the Tian Guo Marching Band. The procession passed by the busy Kowloon area and arrived at Tsim Sha Tsui Ferry Pier. 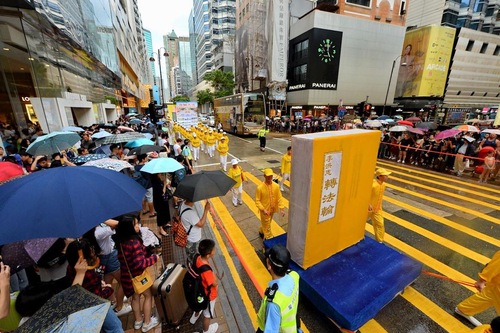 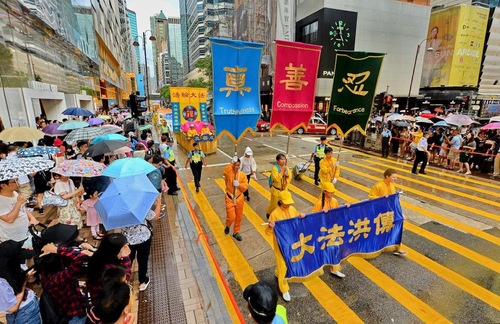 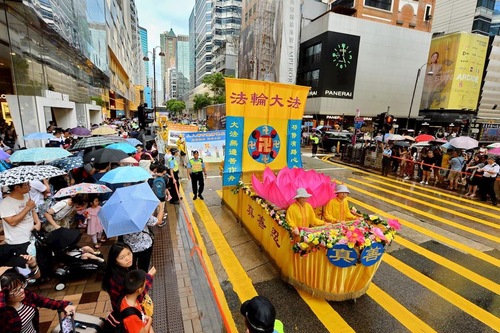 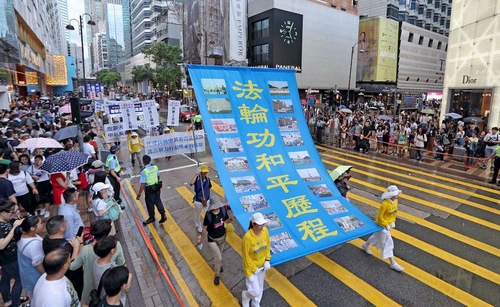 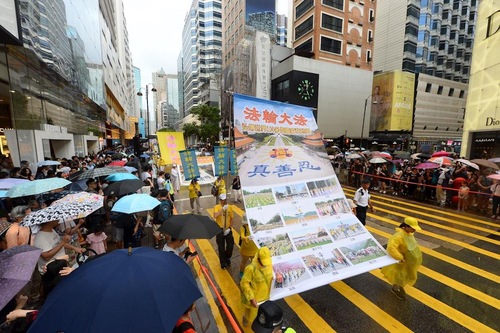 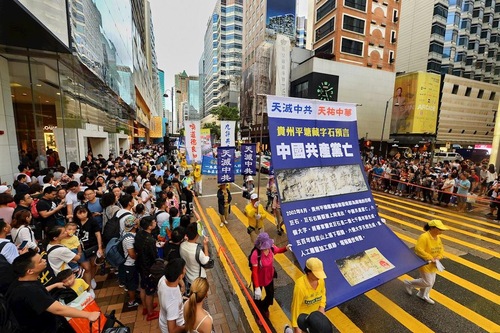 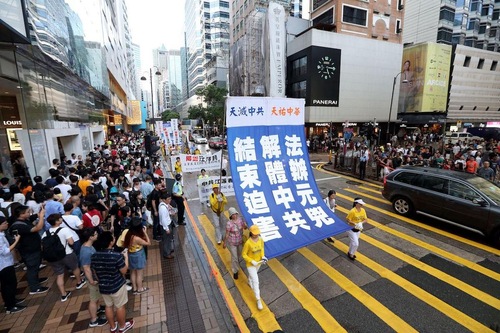 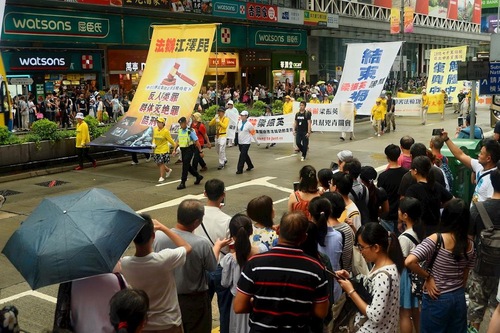 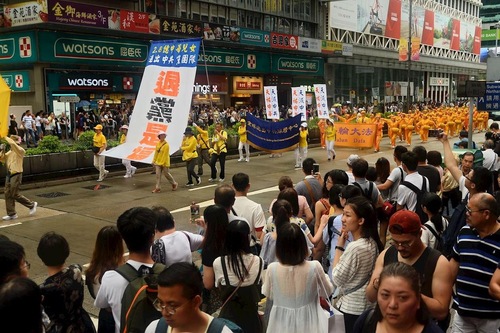 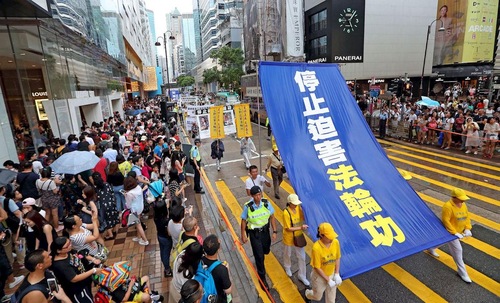 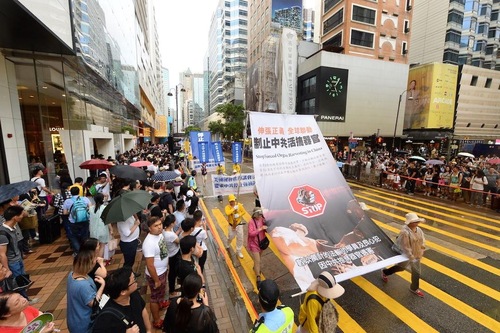 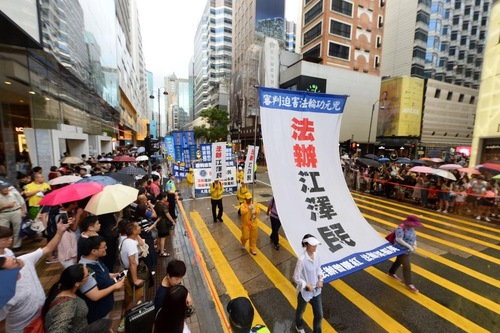 Banners calling for an end to the persecution, stopping the organ harvesting crimes, and bringing former Chinese dictator Jiang Zemin to justice for initiating the persecution of Falun Gong

There were various large banners describing the benefits of practicing Falun Gong and its persecution by the Chinese regime. Many Chinese tourists were shocked, and took photos and videos with their smartphones. Many agreed with Falun Gong’s teaching of the principles of Truthfulness-Compassion-Forbearance and said they would bring the photos and messages to their friends and family members.

Ms. Xia from Shenzhen went to Hong Kong with her friends and encountered the march. She said, “I am shocked by such a large march, since it can’t be seen in the mainland. I feel Hong Kong is democratic and more open-minded.”

Ms. Zhang came to Hong Kong for shopping. She took photos of the march and said, “I think that Hong Kong has freedom of speech. In the mainland, it is not allowed.” She said with emotion that while Truthfulness-Compassion-Forbearance is good, it is taboo in mainland China.

“Born in the 90s: My Predestined Relationship with Dafa”

“March in Paris Raises Awareness of Persecution by Chinese Regime”