(Minghui.org) Today's news from China includes incidents of persecution that took place in 21 cities or counties in 11 provinces. According to this report, 14 Falun Gong practitioners were subjected to mistreatment during their detention, and at least 25 were illegally arrested. 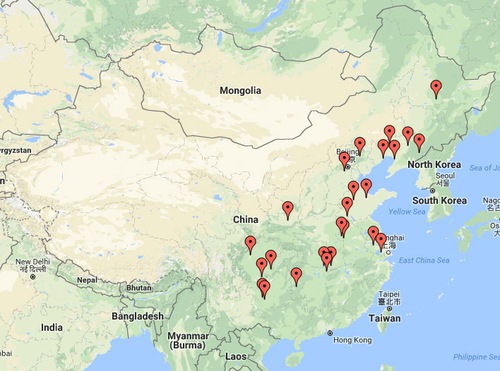 Ms. Qiao Yingmin was arrested at home on the morning of September 26, 2017. Her home was ransacked. Two days later, her family received a notice indicating that she was detained at Anshun City No. 2 Detention Center. Family visits were denied.

Ms. Sun Guilan from the Bayuquan District was arrested by officers from the Chentun Town Police Station on September 29, 2017, for talking to people about Falun Gong. The officers confiscated weekly publications and mini speakers she carried with her. She is being held at Yingkou Detention Center.

Ms. She Qinghua and Ms. Ding Xiaolan from the Xian'an District were reported for talking to people about Falun Gong on the afternoon of October 1, 2017. They were arrested and taken to Xian'an District Detention Center by officers from the Chalukou Police Station.

Officers from the Yingquan District Police Department ransacked Ms. Zi Huaping's home in the evening on September 26, 2017. Ms. Zi was arrested at noon on September 27. She is being held in Xiguan Detention Center.

Mr. Wang Shixiao from Xifanglu Village, Shangkou Town, was secretly sentenced to one year in prison. His family was not notified. He was taken to Shandong Province Men's Prison.

Ms. Yu Guomei was arrested when she was delivering Falun Gong materials in the evening on September 30, 2017. She is detained in the Huanren County Detention Center.

Ms. Wu Guizhi, 71, was arrested and her home ransacked by Liu Tianhao and other officers from the Bayan County No. 2 Police Station at noon on September 29, 2017. Ms. Fan Shufen, 68, was also arrested at the same location. The officers confiscated a computer, about 20 Falun Gong books, and printed materials.

Both women were taken to Harbin City Detention Center. The detention center refused to accept Ms. Wu after she failed the physical exam due to heart problems. The officers then took Ms. Wu to a major hospital in Harbin City for another exam. She failed again and was released on September 30. Ms. Fan was placed under criminal detention.

Ms. Jing Qingyun, Mr. Yuan Wenzhong, Ms. Liu Qiaozhen, Ms. Gao Yuelin, Ms. Jin Ying, and another practitioner were arrested by officers from the Mincheng Police Station, the Domestic Security Division, and the SWAT Team when they were reading the teachings of Falun Gong together at a lady's home in the afternoon on September 11, 2017.

The police confiscated 2,000 yuan in paper bills with Falun Gong information printed on them, photos of the founder of Falun Gong, and Falun Gong books from Ms. Jin's home. They confiscated a notebook computer and brochures from Ms. Liu's home.

Ms. Jing, Mr. Yuan, Ms. Gao, and another practitioner were released from the Jinxiang County Detention Center on September 27, 2017. Ms. Liu and Ms. Jin were taken to the Jining Detention Center. During their detention, their homes were ransacked.

Ms. Liu Yumei, Ms. Yang Guihong, and Ms. Yang Aimei from the Hecheng District were arrested on September 28, 2017. Ms. Liu and Ms. Yang went into the Chengdong Police Station to distribute Falun Gong materials, while the other Ms. Yang was sending forth righteous thoughts outside of the station. They were all arrested. Ms. Liu was released that evening because she is over 70 years of age. The other two were detained for 15 days.

Three officers from the Chengxi Police Station and an administrator from the community broke into Ms. Chen Daoxiu's small grocery store and arrested her. They confiscated Falun Gong materials. Ms. Chen was taken to the Heping Guest House at midnight, where she was watched by two officers. She was not released until 5 p.m. the following day.

Officers from the Honghu City Police Department and the Xindi Police Station showed up at Mr. Weng's food stand on the morning of August 25, 2017. They held Mr. Weng down on the floor, handcuffed him, and then pushed and dragged him and his wife into the police car. The couple were taken to the Xindi Police Station and interrogated. They were restrained on tiger benches and exposed to heat for up to six hours, without any water to drink.

The police also raided the couple's home and confiscated a TV set; a DVD player; a DVD burner; speakers; Falun Gong books, materials, and DVDs; a photo of the founder of Falun Gong; and keys, all valued at over 5,000 yuan.

The officers kneeled down on Mr. Weng in the area of his liver and pressed hard, which nearly killed him. Mr. Weng was taken to the Honghu Detention Center for 15 days of detention. He resisted the persecution despite severe pain, blood in his stool, and esophageal atrophy.

Ms. Qu Lijun from Shouwangfen Town in the Yingzi Mining District was arrested by Xinglong County Police Department officers about two weeks ago. She is being held in Laoxiying Detention Center in Shuangfengsi Town.

Ms. Li Fengbao, 65, from Tongcheng County, Hubei Province, was staying with her daughter in Zhuhai City, Guangdong Province, when more than a dozen police officers broke into her daughter's home and ransacked it in the middle of the night some time ago. They confiscated two Falun Gong books and printed materials. Traumatized, Ms. Li suffered a cerebral hemorrhage. After surgery, she remained unconscious for over 10 days and in critical condition.

Mr. Dai Qiyuan, in his 60s, was arrested around March 18, 2017. It was recently reported that he was given a three-year prison term and is now in the Zunyi Detention Center.

It was reported that six practitioners, including one with the last name Gong, were arrested near the Fushun City No. 2 Hospital and taken to the Gongnong Police Station on September 20, 2017.

A practitioner with the last name Cheng, who was not at home when his home was ransacked, was not arrested. His computer was confiscated.

Participant in the persecution of the six practitioners:Gongnong Police Station: +86-24-56685251

Ms. Wen Yuhuan from the New Area was reported for distributing Falun Gong materials on September 13, 2017. She was arrested and her home ransacked. She was taken to a detention center.

The police pried open Ms. Qin Yanfei's door and arrested her on the morning of September 25, 2017. Ms. Qin's mother (in her 80s) was also there. After Ms. Qin was taken away, the police ransacked her home. They confiscated a printer, a computer, and Falun Gong books. She was taken to a detention center.

Mr. Wei Zaiqiang, 57, who is employed at the Hongyuan Factory, was arrested by Gaoling District Police Department officers on December 10, 2016, for posting Falun Gong signs on telephone poles. He was held in Gaoling Detention Center.

“We Must Not Confuse Compliance with Compassion”