(Minghui.org) The Falun Dafa Club at Columbia University in New York City held a photo exhibition on campus from October 9-12, 2017. Many people stopped to ask questions, sign petitions urging the Chinese Communist Party (CCP) to stop the suppression of Falun Dafa in China, or sign up for upcoming event notification. 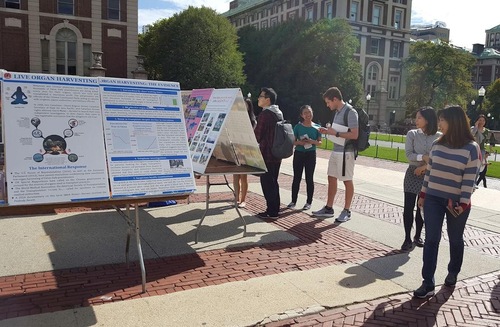 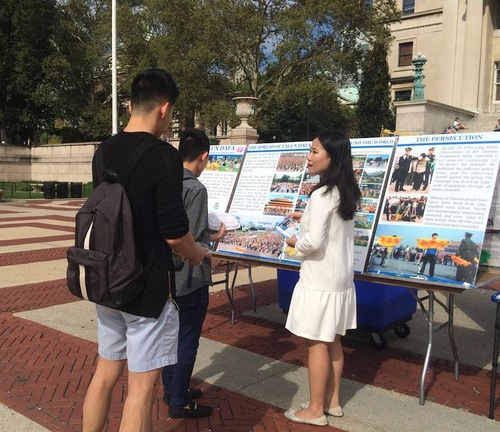 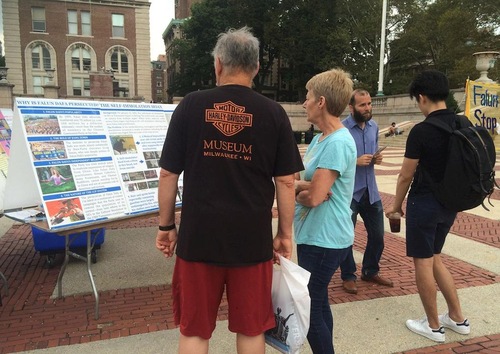 Despite the drizzle on the first day, many students read posters and talked with practitioners. One student said he was shocked by the forced organ harvesting from living Falun Dafa practitioners in China. “But one of my Chinese friends said negative things about Falun Dafa. So, exactly what is going on?” A practitioner explained to him that the communist party had defamed Falun Dafa with lies since the suppression started in 1999 and provided him with some examples. The student came again the following day asking for materials and article links. “I will share them with my Chinese friend,” he said.

A student studying Eastern Asian language had been in China several times. Having heard negative things about Falun Dafa in China, she asked for clarification. A practitioner told her how the communist party slandered Falun Dafa with hate propaganda, such as the staged Tiananmen Square Self-immolation in 2001. The student said that she now understood why some Chinese had misunderstandings about Falun Dafa.

Another student said he had heard mixed information from Chinese friends and wanted to find out why. A practitioner explained how well the practice had been received in China and abroad, and how the regime launched the persecution when the group grew to nearly 100 million people, which was more than official Communist Party membership. The student said he would pass on the information. “I think my friends need to know this too,” he said.

“Cooperating with Other Practitioners to Fulfill Our Vows”