(Minghui.org) Today's news from China includes incidents of persecution that took place in 11 cities or counties in 6 provinces. According to this report, 4 Falun Gong practitioners were subjected to mistreatment during their detention, and at least 8 were illegally arrested. 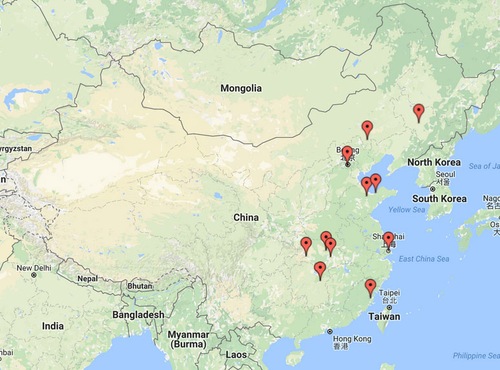 Ms. Gan Hongping was sentenced to four years in prison and fined 10,000 yuan in December 2016. Her computer and other personal items were confiscated.

Ms. Tian from Tianliu Village, Tianliu Town, was arrested by officers from the Shuangwangcheng Police Station on the morning of December 18, 2016.

Ms. Sun Youlan from Etou Village, Tangdi Town, was arrested by officers from the Tangdi Town Police Station on December 26, 2016.

Mr. Tan Guohui from Aohan Banner was reported for talking to people about Falun Gong in rural areas on December 9, 2016. He was arrested by the local police and detained for four days.

Mr. Teng Weiguo and his wife Ms. Zheng Junying were arrested by the Laizhou City police on the morning of December 16, 2016.

Mr. Liu Yonghua was sentenced to three years in prison and fined 6,000 yuan by the Chaoyang District Court on November 4, 2016.

Mr. Chen Wei from Shandong Province was arrested in Shanghai by officers from the Xuhui District Police Department and the Changqiao New Village Police Station, on December 16, 2016. He is held in the Xuhui Detention Center.

Mr. Ren Xiangdong was arrested at home by Gao Fujiang, a residential police officer, who was accompanied by staff from the residential community, on December 14, 2016.

Mr. Ren was taken to the Yangyuan Brainwashing Center in the Wuchang District.

Mr. Zhang is held in the Fuzhou No.2 Detention Center.

Mr. Guo Xinchu and his wife Ms. Xiang Biyun from Xiaohu Village, Wangcheng County, were hanging Falun Gong banners on October 26, 2016, when they were seen by the local police.

Mr. Guo was arrested, and is held in the Changsha City No. 2 Detention Center.

However, Ms. Xiang managed to escape, but has had to stay away from home to avoid being arrested.

Ms. Che Xiuying went to the Fuzhilu Police Station to deliver letters containing information about Falun Gong and the persecution around mid-day on December 15, 2016.

She was arrested and taken to the Weizigou Detention Center for 15 days.

“Importance of Cultivating the Heart”

“Eliminating Human Notions and Paying Attention to the Exercises”