(Minghui.org) Celebrations were held on January 26, Australia Day, in Melbourne and Sydney Australia. Falun Gong practitioners participated in a grand parade in Melbourne and a stage performance in a community in North Sydney.

More than 80 groups with various traditional dress participated in a grand parade on Swanston Street in Melbourne on the morning of January 26, 2017.

The Victoria Falun Dafa Association was invited to participate in the parade. The procession of Falun Gong practitioners was led by the Tian Guo Marching Band, which was followed by practitioners demonstrating the five sets of exercises, and a fan dancing team and waist drum team. Their performance won warm applause. 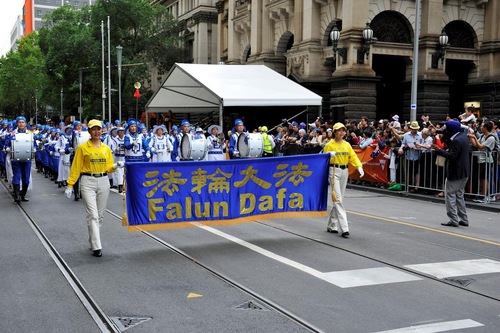 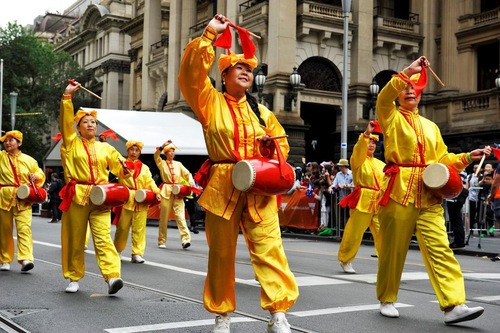 Falun Gong practitioners' procession was welcomed in the Australia Day parade in Melbourne.

Ms. Wang from Guangxi, China watched the parade with her son, sister-in-law, and niece. She was excited to see a Falun Gong procession in the parade, “I see Falun Gong is respected in this country. This is a fact. We come here for a tour and take photos and videos. We will tell our relatives and friends in China what we have seen. In Melbourne, we are here for Australia Day. It is close to Chinese New Year. We are fortunate.”

Ms. Wang said regarding the freedom in Australia, “In China, police are seen everywhere. The atmosphere is tense. It is quite different here. Australia is a country with true belief.” 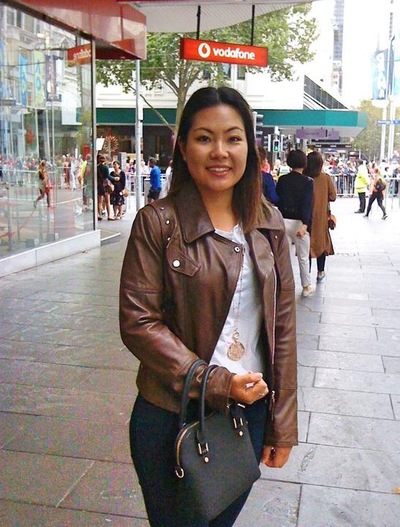 Spectator Olivia Jom commended the performance of the Tian Guo Marching Band. She said, “This is traditional music. I hope to see more performances by the band.”

The Australia Day celebration was held in Bicentennial Park by the Ku-ring-gai Council in North Sydney. Falun Gong practitioners were invited to participate in the performance. 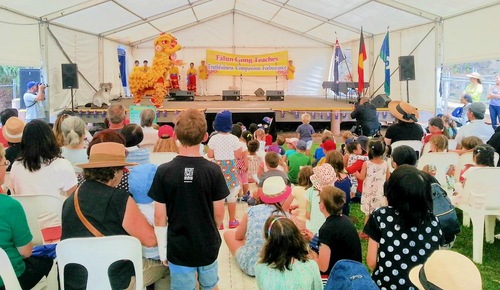 Audience member Angie Tindall said, “The Falun Gong group is spectacular. The colors are bright. I like their costumes. They also have special head-wear.” She said she saw their rehearsal before the show and was impressed.

She was interested in the waist drum playing. She inquired about the history and tradition of waist drums, as well as the music. Upon learning that the music was Falun Dafa Is Good, she smiled, “There is so much history and connotation.”

Actor Graham Kelleher was a moderator of the celebration. He said, “We have just seen the performance of the Falun Gong group. They are spectacular. The waist drum play is impressive, with loud sound. I say it is a wonderful performance. There is also a lion dancing team, which is always welcomed. I hope to see more of their performances in our community.”