(Minghui.org) Falun Dafa practitioners in the U.K. had their annual gathering on August 28, 2016 at the Columbia Hotel, to share stories and thoughts relating to their cultivation practice.

Twenty practitioners at the 2016 UK Falun Dafa Experience Sharing Conference talked about how they were able to more effectively tell the public about the persecution in China when they closely follow the principles of Truthfulness-Compassion-Forbearance.

After the conference, many practitioners said they were glad to have had this opportunity to improve themselves by learning from others. They were moved by the courage of other practitioners, inspired by what others have done to save more people, and recognized that there is still room left for them to improve. 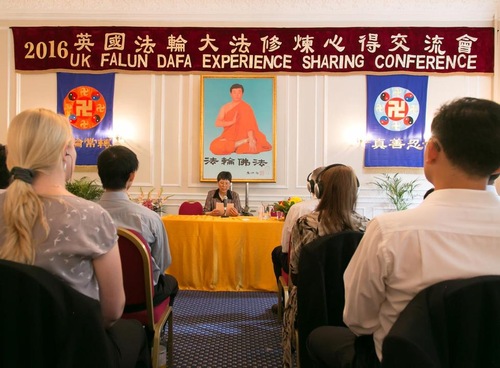 Patrick Hayden and Rob Gray shared their recent experiences in telling Members of the European Parliament about the ongoing persecution in China. They asked the MEPs for their support to end the Chinese regime's killing of prisoners of conscience for their organs, including Falun Dafa practitioners, and shared how they benefited from looking within for their own shortcomings during the process.

When speaking with MEPs face to face, Patrick tried to let go of his human notions and focus on one thought: saving people. Through this righteous thought, he was given wisdom and energy to more effectively resolve misunderstandings in the other person's mind.

Rob said that one time he encountered a lot of interference while convincing MEPs to give their signatures against the persecution. He realized that he was focusing on getting signatures instead of wanting the MEPs and their assistants to know the facts behind the persecution. As soon as this thought emerged, he felt a stream of energy all over his body and saw Teacher's Fashen. He knew that Teacher was encouraging him.

Through this challenging process, Rob realized that the most important thing was to have the pure thought of wanting to save people. Only then will Teacher be able to make it happen.

Having Compassion in Order to Save More People

Many practitioners shared how human attachments and notions were the greatest interference while saving people.

When clarifying the facts to the Chinese people, many times practitioners need to let go of the desire to fight and complain; they also need to remove the attachments of zealotry, jealousy, and fear. When the attachments were eliminated, compassion emerged and allowed the practitioners to save more people.

One must also treat their every thought seriously when tribulations and interference arise, so that bad thoughts can be quickly eliminated.

Ms. Zhou said she went to a tourist attraction every day to tell Chinese tourists about the persecution in their home country. When she met with difficulties, she told herself that she should look within unconditionally to eliminate human notions. She said that studying the Falun Dafa teachings is the foundation of saving people, and that when she improved her character and had compassion for the Chinese people, the energy field surrounding her changed dramatically. More tourists were willing to listen to her and quit the Chinese Communist Party and its affiliated organizations.

Ms. Li shared that she often became frustrated with trivial things in her daily life and became annoyed easily when she heard about things that had happened among practitioners.

When she looked for the root of her anger, she found that it came from jealousy. She realized that jealousy often interfered with her practice and caused friction between her and other practitioners. As she found her attachment, her constant anger went away.

Kat Piper attended the conference with her husband and eight-year-old son. She recently recovered from an illness and came to the understanding that when things look difficult, as long as she faced the tribulation like a true Falun Dafa practitioner, Teacher would help her, and she would be able to pass the test.

Takeaways from the Conference

A senior practitioner from northern England said that other practitioners' sharings allowed him to find the motivation to progress diligently again, like when he was a new practitioner.

Two new practitioners from Scotland said that the most important thing they learned at the conference was to quickly improve in the practice and help save more people.

A practitioner from London said that every story was a great inspiration to her and encouraged her to work harder in her cultivation.

“Canada: Members of Parliament Call on Prime Minister to Stand Up for Falun Gong in China”