(Minghui.org) Falun Dafa practitioners participated in the 67th Carnival of Flowers parade held in Toowoomba, Australia on September 17, 2016. Every year since 2007, the Tian Guo Marching Band has been invited to lead the parade.

The Carnival of Flowers launched in 1949, is the oldest floral parade in the Southern Hemisphere. This award-winning parade also earned Toowoomba, the second most populous inland city in the country after the national capital of Canberra, a beautiful nickname of “The Garden City.”

More than 100,000 people attended the parade. As the 56-member Tian Guo Marching Band appeared at the starting point of the parade, the melody of “Falun Dafa is good” immediately drew broad attention and warm applause from the spectators.

“This is awesome,” said one. “Outstanding,” said another. Many people gave a thumbs up and took pictures. 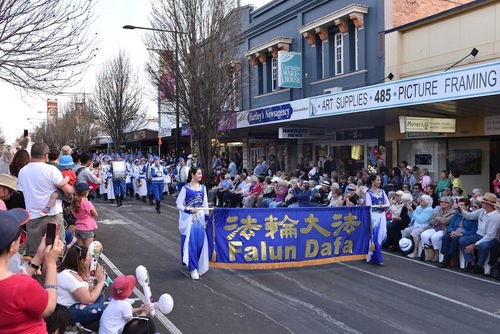 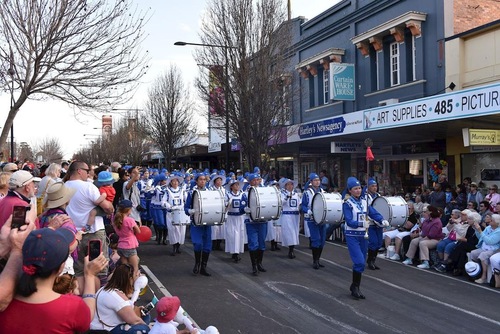 The host when introducing the practice said, “Falun Dafa, also known as Falun Gong, is a self-improvement system based on the principles of Truthfulness-Compassion-Forbearance. Since being introduced to the public in 1992, it is widely practiced in over 100 nations and has received proclamations from all levels of government agencies.”

One woman said she attends the parade every year and the performance of Tian Guo Marching Band is especially memorable.

One couple said they have been to the parade many times. “We like it very much. Every time after watching this performance [of the Tian Guo Marching Band], I wanted to look up on the internet information about Falun Dafa. I will make sure do so this time.” 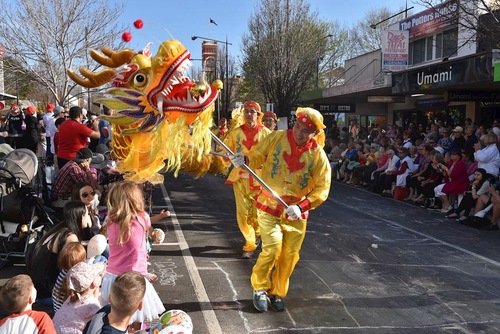 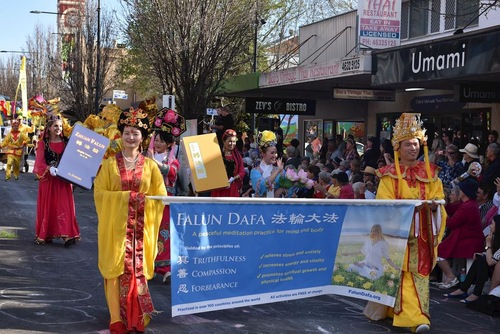 Practitioners have been invited to attend this event since 1999. The Tian Guo Marching Band has been performing since 2007.

A few Chinese students were also excited to see Falun Dafa practitioners. “I did not realize Falun Gong was so popular overseas,” said one student, “I will share these photos with my friends.”