(Minghui.org) Practitioners held a march in downtown San Francisco on September 11, 2016, to raise awareness of the ongoing organ harvesting from living Falun Gong practitioners in China. 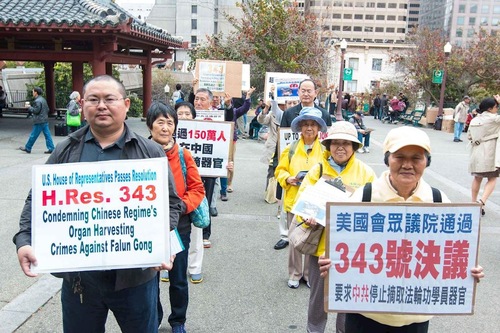 Practitioner Ms. Gao said to a passerby, “Please tell your friends not to take organ tourism to China.” Next to her were posters in both English and Chinese, “U.S. House of Representatives Passes Resolution H.Res. 343 Condemning Chinese Regime's Organ Harvesting Crimes Against Falun Gong.”

House Resolution 343, which was passed in June, “Condemns the practice of state-sanctioned forced organ harvesting in China.” It also calls on China and the Communist Party of China to end the practice of organ harvesting from prisoners of conscience, as well as demands an end to the 17-year persecution of the Falun Gong spiritual practice and the release of all Falun Gong practitioners and other prisoners of conscience.

Lauren Fricchione from Southern California heard about the atrocity for the first time at the event. She felt it was unethical and against humanity. Her friend Farnaz Eslambolchi said, “This is as if tagging a person with a price for sale.” Both of them thanked the practitioners for providing updated information. 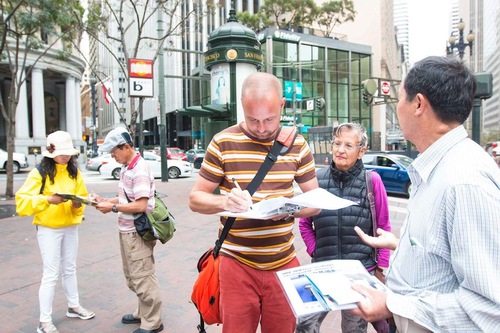 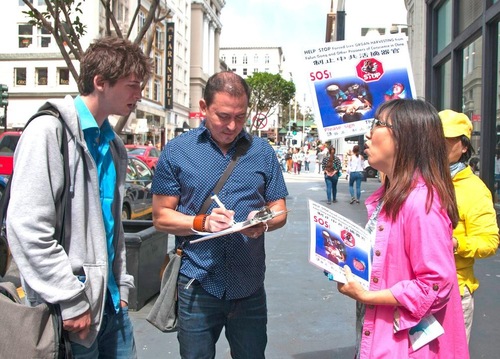 Rafael Vargas, a visual artist in the Bay Area, was disturbed by the brutality. “Science and technology can be used for the cure of illnesses, but it is absolutely wrong for them to be used for killing people.” He said more people need to the know about this.

Ms. Cao, another practitioner who attended the event, said that the efforts would continue to help more people know the real story of Falun Gong, as well as the tragedy of forced organ harvesting.